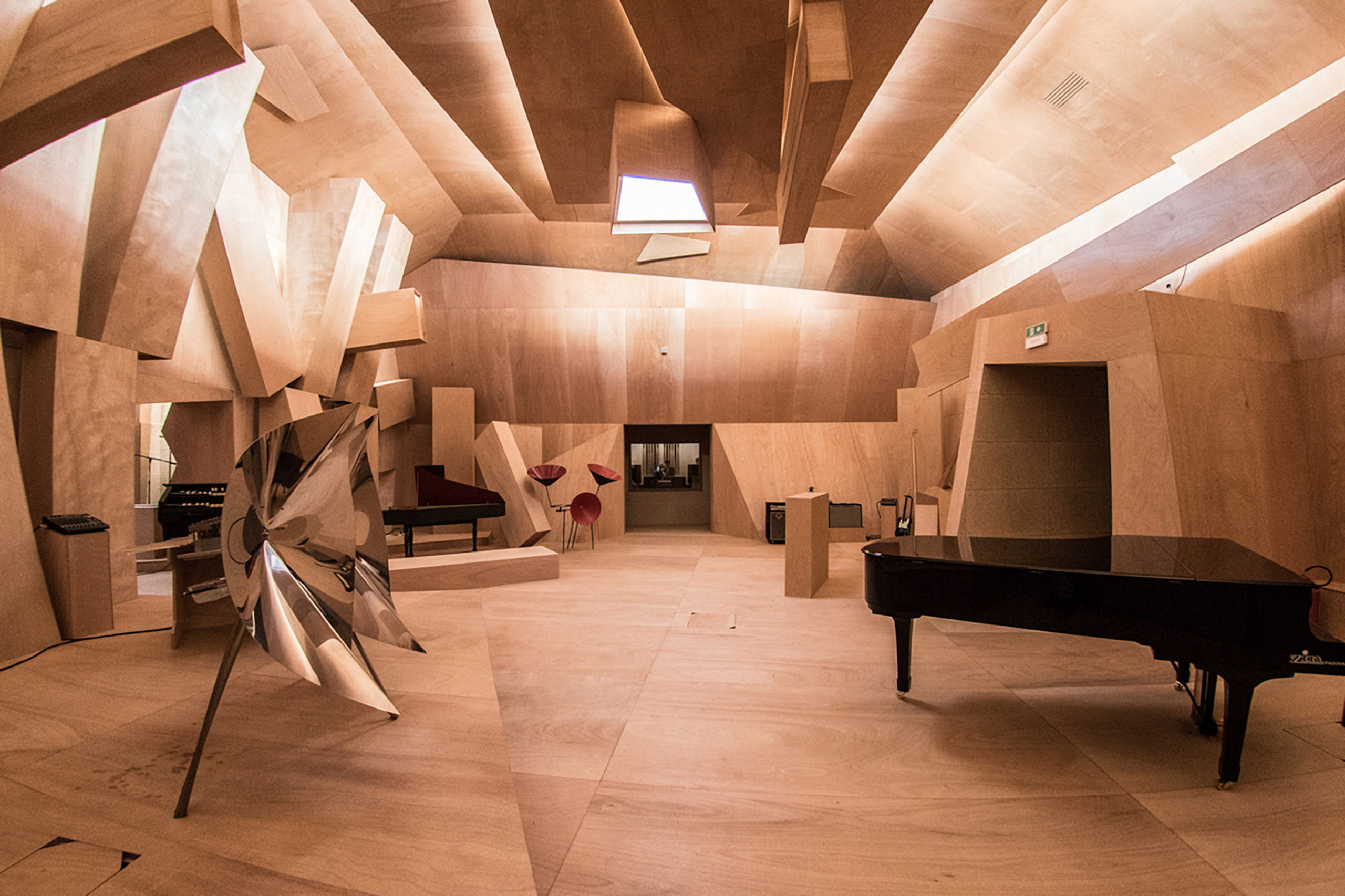 Xavier Veilhan is a French artist born in 1963, living and working in Paris, whose work is mostly based in sculpture and installation. Parisians discovered him in the ‘90s when he was exhibited by Jennifer Flay. Today, he is represented by Andréhn-Schiptjenko (Stockholm), Galerie Perrotin (Paris, Hong Kong, New York, Seoul), Galeria Nara Roesler (São Paulo, Rio de Janeiro, New York) & 313 Art Project (Seoul). His body of work now brings him to attend Venice, where he was invited by the French Pavilion for the Biennale to present his installation “Studio Venizia,” a musical space in which professional musicians from around the world create new recordings.

In your installation for the French Pavilion of the Venice Biennale, you created a studio platform and curatorial program inviting other artists to participate. What motivates the artist to escape from this irresistible desire to be the only voice in such a manifestation?

It is not generosity, nor the wish to take a step back, but the logical result of the initial concept of the project: to create a situation that involves several actors. My stimulation and inspiration came from musicians and the whole creative process around music. “Studio Venezia” has become a mix between an exhibition space and a creative lab where people come to work one after the other.

Usually, in your creative process, do you like to share ideas with your curators or gallery owners?

When I have the idea of new work, I start to talk about it with the people from my studio. I refine the idea by exchanging with them, and once it is defined, I begin to work on it concretely. It is only then that I share it with galleries or curators.

The studio has very interesting architecture. Between visual arts, architecture, and music, your installation brings together the greatest aesthetic forms of creation. What did you seek to provoke?

I did not want to compete in terms of quantity of shapes, but rather to create something soft, with almost a domestic feel to it. I want people to feel good when they enter the French Pavilion, with all their senses: from the smell of the wood to the light and acoustic design. It is very important to inform the visitors about what is going on and how they should behave inside “Studio Venezia”. The fact that wood is used almost everywhere—floor, ceiling and walls—gives the impression of being in a closed environment, like a cave, which adds to this softness.

You have built a studio that hides a Neo-Classical building under panels of plywood in Okoumé, wood of the tropical regions. Does this choice of material have a relationship with its musical purposes?

Traditionally, wood has always been used to build acoustic spaces, like Renaissance theatres for example. It is also linked to the fact that theatre halls and philharmonics, just like recording studios, are similar to the inside of an instrument. And last but not least, wood is cheap and very easy to handle, especially plywood. All these different reasons explain why we chose wood as the main material of the installation.

Have you studied composition? Do you play an instrument?

No, unfortunately not. However, if I were a musician, I would probably just be playing the music. Instead, I have created an environment to simply listen, which is a dream situation for any music lover: I invite people I am a fan of, to create new pieces right in front of me, making it possible to live exceptional moments.

There is a real opening of artistic practice with the integration of the musicians and an acoustic chamber where the world is invited—a very beautiful idea, this collective energy, the team spirit that invites musicians and composers of great talent and renown. Do the visitors also participate in the musical process or do they remain spectators?

Visitors cannot participate in the sense that they cannot play the music, but they are definitely participating by having an effect on musicians, which I actually had underestimated. At first, I thought visitors would have been affected by being confronted to new kinds of music, but most of them are in fact open to new experiences thanks to the context of the Biennale. On the other hand, musicians are very much affected by the presence of spectators. There is a pressure—an empathic pressure, but a pressure nonetheless—that comes from the people in the room, which turns every moment into a performance. It is very interesting because it creates a new situation where recording becomes live recording, which changes the typology of the experience inside the pavilion into something new and hybrid, between performance and studio reflexion.

It’s a top playlist of guest musicians, from Chassol to DJ Chloé. Many of them are French but it also includes a bunch of international artists from Lee Scratch Perry to Thurston Moore, it goes far . . . Why give an international dimension to the French pavilion?

It was not planned, it came naturally, but I am happy it occurred. Nevertheless, I think music is by essence international. The music you find in nightclubs all around the world, just like the music on Deezer, Spotify or iTunes is music before it is international music. Music transcends national boundaries, and even though musicians have their own nationality, their music is stateless.

Today while the show is underway, what are the highlights for you?

The other day, I was looking at Pietro, one of the mediators of Studio Venezia, moving stuff around and I realized the studio has been operational for 5 months already. It reminded me of how far we’ve come since the beginning of the project. To me every moment we live here is special in its own way. And there is always something happening, making the project emotionally very intense. I try to share a lot of these emotions on my Instagram stories.

The Venice Biennale is already one of the most important events of art, it is something between the Olympic Games and the World’s Fair. It is a principle of inviting a large number of countries to be represented by an elected artist / winner of a national competition that symbolizes the top of contemporary national creation. You are the gifted/chosen one of this edition and you chose to implement an installation that involves creating or performing other art pieces, an echo effect of creation in a studio. Does the art created by other artists in your studio becomes part of your work?

Yes and no. No, because the music created inside the French Pavilion remains the musicians’ property. And yes, because this music has been created and played for the first time here, which makes it belong in a way to the history of the place and the work. I am more interested in being able to share moments of creativity with musicians than in owning their creations.

Nietzsche has widely demonstrated that we are born from multiplicity, that the centre is everywhere. Do you think that this work shares this sentiment?

It is related in a way. “Studio V—the envelop—and the space for musical creation—the studio. On the other hand, there is the time of the exhibition—7 months—the time of each residency—a few days—and the time of the musical creation—the chronology of music in regards to its creation in the studio. These different spaces and times collide and intertwine to end up changing our perspective on music and on the format of the exhibition.

Marina Abramovic: In Residence in Australia and Urs Fisher at the Museum of Contemporary Art, Los Angeles both invited other artists to create major exhibitions Similar to these two recent examples, your guest artists are not paid but fed, housed, washed, and in addition, they share the fabulous life experience of artists who work in community in a prestigious space. If they want to, and if the opportunity arises, they can also leave with their own musical creations to use as they choose. During a live recording for example, is there a clause that recommends attribution of production as coming from the studio Xavier Veilhan?

An important part for me is that the invited musicians are not paid. Our agreement includes the possibility to make new recordings, with the simple constraint of having an audience present inside the studio, but it is based on an invitation. There is no money involved, which I find interesting since it is different from nearly all other situations involving music. When one listens to music on streaming applications, when one buys a concert ticket, even with ads one can find on YouTube while watching music videos, there is always money involved. I want musicians to come to “Studio Venezia” with a blank page and no pressure related to money. That way they can take the creative direction they choose, without any financial obligation.

Here do you also play the role of producer, patron, or both?

I think I am more like a host who creates the situation. It is like being in your own house and inviting people over, which can lead to many types of exchange and creativity.

Do you have the feeling of multiplying yourself?

Not really. Actually, it is difficult for me to imagine what will be the result of this experience that has obviously and quite deeply changed me as a person. However, I have the feeling that it centers me more than it dislocates me.

You would of course prefer that the artists leave with the best memories of this magnificent experience. As a result, would you wish for them to get a mega-contract with an international producer, the creation in situ of a future chart-topping hit, or finding a soul mate?

I would like this experience to create a link between all the musicians that have participated in “Studio Venezia”, like a community. I always give the example of universities and some art schools, like Sciences Po Paris or the Black Mountain College, that manage to make strong connections between students or former students. Twenty years after leaving school, one can connect or reconnect with people that one has never physically met but who have once studied at the same school. However, my goal is not to end up with this or that result. It would be more akin to a scientific experiment: putting two things in the same place and observing what happens.