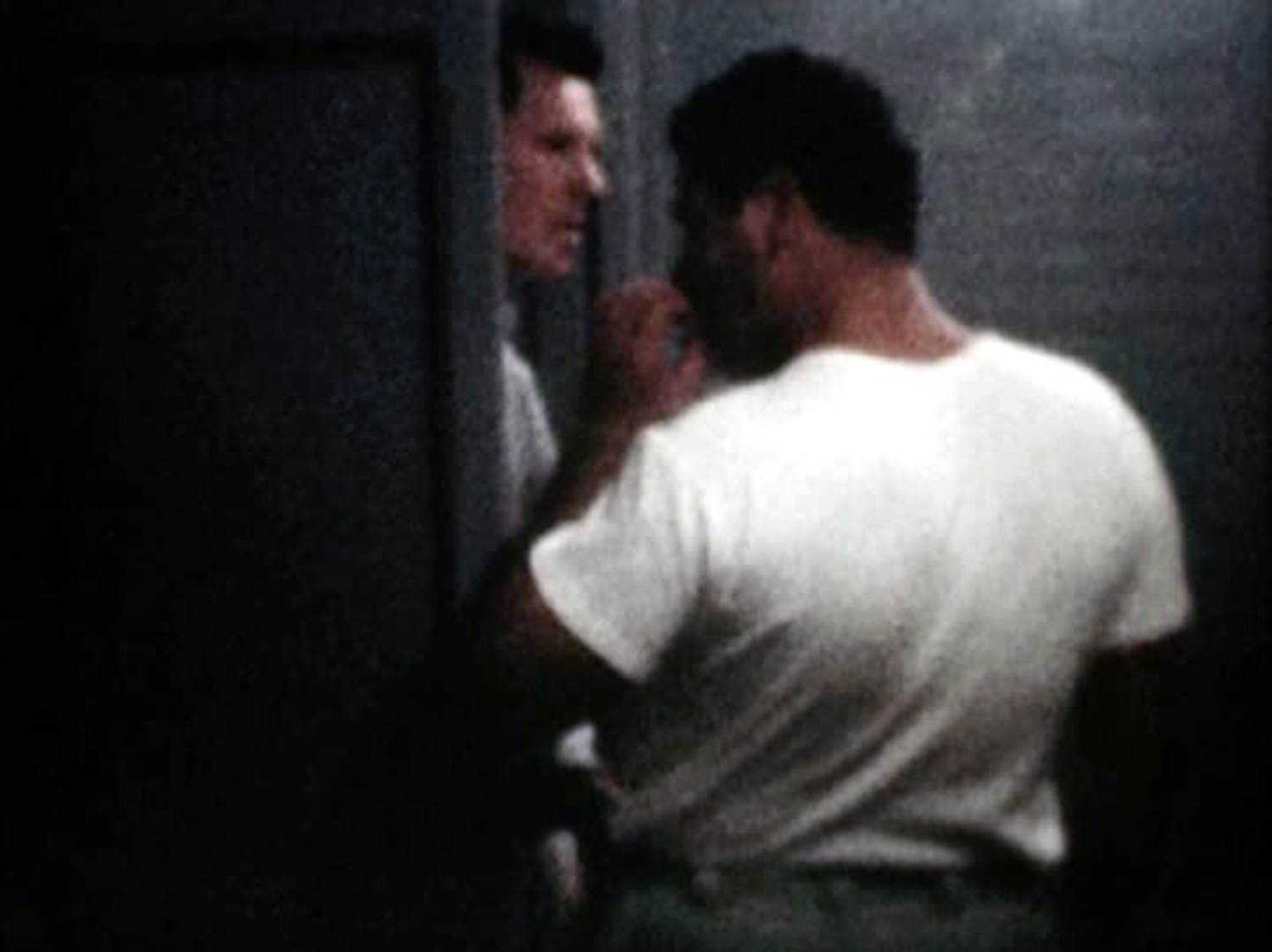 William E Jones was born and raised in Ohio, but is now one of LA’s leading independent filmmakers. I recently caught up with him about his highly emotive body of work, which predominantly deals with the deconstruction of artifice and façade in found footage; this has included gay pornography from post-Soviet states (The Fall of Communism as Seen in Gay Pornography), homophobic police training footage (Tearoom), and Cold War propaganda (Berlin Flash Frames). He recently exhibited in The Sculpture Center in Queens, and his work has otherwise been shown at museums and film festivals worldwide—including the Musée de Louvre, MoMA, the International Film Festival Rotterdam, Sundance Film Festival, and was the subject of a retrospective at Tate Modern.

Just to begin, I’d like to say that I really love your work; it’s striking, without being explicit. Could you tell us a bit about your influences? What is your particular attraction to old war footage and gay pornography, two things that wouldn’t necessarily usually go together?

Since 1973, the US armed forces have not resorted to conscription, which, while scary for individual men during the Vietnam War, had the virtue of bringing together a range of classes in one social unit. Now the military is perceived as a vehicle of upward mobility for working class people, a perception that often proves to be illusory, or at best, immensely risky. This bitter reality seems to trouble those governing the United States (or at least their most hawkish elements) very little. They behave as though American working people are expendable, though perhaps not as expendable as the foreigners they are sent to bomb.

The act of repetition simultaneously fetishises and desensitizes the material for the viewer, and this can be seen in Film Montages (for Peter Roehr), and in Industry. What drew you to repetition? Do you feel that the act of repetition makes the non-explicit footage somehow explicit, in the Freudian sense of uncanny?

Strict repetition is a strategy almost alien to the cinema. It is absolutely fundamental to music (without it, there would be no rhythm) and rather common in modern art (as in Warhol, minimalism), yet seeing exactly the same thing over and over would never happen in a narrative film, which, we must acknowledge, is the dominant form of cinema. Peter Roehr appeals to me because he took up repetition with complete consistency, and applied it to his movies without moderating it or “cheating.” This bracing disregard for the rules of how to make a movie, at the risk of engaging in a kind of sadism, suggests one of the ways that film and art are still distinct as media. Filmmakers care that their works are watchable, because if spectators don’t stay in the theater for their movies, they won’t get to make any more of them. Artists tend to take a position of indifference on this question. Few have seen Empire in its entirety, but this hasn’t harmed Warhol’s status as an artist; it may actually have enhanced it.

This idea is especially poignant in your work The Fall of Communism as Seen in Gay Pornography—given that it seems to be about something far more personal than new capitalism and the commodification of sex. In fact, what I took from The Fall… was that it was particularly haunting, not only because of its recent cultural relevance, but because it evokes that feeling of strangeness, of finding one’s way in a completely new environment, navigating the unknown and being taken advantage of—which I think are feelings that most people can, at least partially, relate to. So, I found it interesting how this work was so personal, whilst also speaking of a wider political context. What was your thought process whilst working on this film?

From my own personal point of view, one poignant aspect of The Fall of Communism as Seen in Gay Pornography was that I had no money when I made it. I consider the collapse of state socialism in Eastern Europe the most important political event of our lifetimes. At the time it happened, I was living thousands of miles away and was not capable of recording anything directly. Yet the transformation of the way people lived was so profound that evidence was everywhere (as it still is, I would argue). It was just a matter of me finding this evidence and placing it in the proper context. Fortunately, I had the presence of mind to realize that I needed to look no further than the neighborhood video store.

Despite the efforts of a century of narrative cinema to make us believe otherwise, individuals rarely make history. We generally experience historical change as dislocation and confusion. This is the pathos of modernity: no matter how smart or secure we feel ourselves to be, our consciousness has trouble reckoning with new forms of domination and the latest crimes committed by managers of capital. At certain moments, the rules of the game are laid bare. I think The Fall of Communism as Seen in Gay Pornography contains a few of them.

In your recent work, Eyelines, you present found film footage of advertisements from the 60s and 70s and compile them, in order to distort and confuse the original intention of the images. The footage has naturally faded to various shades of red, and your contribution to this is mostly in the act of compilation. Similarly, when discussing Tearoom you have said that you ‘didn’t want to obscure the actions of the police by imposing your own decisions on the material’; how do you explain this move towards less-appropriated and more found footage?

Eyelines dismantles one of the fundamental figures of narrative filmmaking (a holdover from figurative painting), the eyeline, by looping very brief shots and alternating them in intervals so quick that the effect is stroboscopic. The work is reminiscent of the “structural” avant-garde films that analyzed the formal aspects of cinema, often at a microscopic level. Eyelines also has a mathematical, or perhaps musical, structure, as many of my works do, though this is rarely obvious. Every single permutation, that is to say every combination of individual frames, is exhausted over the course of Eyelines’ 1 hour and 51 minute length. Though the frames are not altered at all, I wouldn’t exactly call Eyelines a “found footage film.” For one thing, the total length of the source material is only approximately 30 seconds. The visual effects are achieved through montage, and as the piece plays out, the multitude of combinations invite spectators’ eyes to play tricks on them.

I had the pleasure of seeing Berlin Flash Frames at The Sculpture Center’s (NYC) recent exhibition ‘Time Again’. At the beginning of the film, the images are fast and obscure, before eventually slowing down to show more clearly the collapse of the actors’ and civilians’ assumed ‘camera face’ identities. What interests you about this? Why did you choose a slow revelation over an immediate one?

Immediate revelations are better suited to billboards and abstract paintings than to moving image works, which must unfold in time and have the possibility of justifying their duration.

There’s also a theme of disguise and acting, and the undoing of this, in your works that is prominent in The Fall…, Berlin Flash Frames, and even Tearoom. You seem to be fascinated by this idea of letting one’s guard down, captured in accidental footage of people caught in deeply intimate, unstaged and personal moments—it was therefore fitting to see you refer to Tearoom as ‘an historical artifact.’ So, in light of this and of your work with old wartime footage, such as with Berlin Flash Frames and War Planes, is the preservation and, perhaps, redefinition of history important to you? How do you view the relationship between documentary and propaganda—what in particular draws you to working with, and the deconstructing of, docustyle propaganda film footage, such as Berlin Flash Frames or Tearoom?

Propaganda films exploit the rhetoric of traditional documentary forms in order to commit a fraud. Documentary is not a style, but an ethical position the person representing takes toward the represented. In propaganda, ethics are of little concern.

The original material of Berlin Flash Frames interests me because it exhibits a diversity of approaches to filmmaking. Outright falsification employing actors on sets exists side by side with surveillance footage of the construction of the Berlin Wall, and there are other sequences that appear to be documentary footage, though they are not exactly that. An actor from the fictional scenes circulates among crowds of people waiting in line at government offices in West Berlin. Most of them were aware that they were being filmed, but there wasn’t much they could do about it, besides looking away (which preserved their anonymity) or looking directly into the camera (which ruined the take). I can extrapolate from this footage that every resident of West Berlin was a (willing or unwilling) extra in one giant Cold War movie.

Tearoom presents a different range of contradictions. The police force of Mansfield, Ohio (and the vigilantes that supported them) deemed it necessary to record surveillance footage of men having sex in the center of their city. The film was not shot automatically by a machine alone. A police officer had to stand for hours in a closet behind a two-way mirror watching men go in and out of a public toilet. He chose what to shoot: he turned the camera on and off, and within certain physical restrictions, he moved the camera. What was intended as an “objective” document of deviant sexual activity has come to seem transparently subjective. When an attractive young man enters the space, the camera moves frenetically, as though it cannot get enough of him. In the early 1960s, public opinion held the men in the film to be perverts and those who commissioned, shot, and used the film as evidence in court to be fine, upstanding citizens.  Today, spectators are likely to form another opinion.  Tearoom allows an audience to reflect upon this historical transformation.