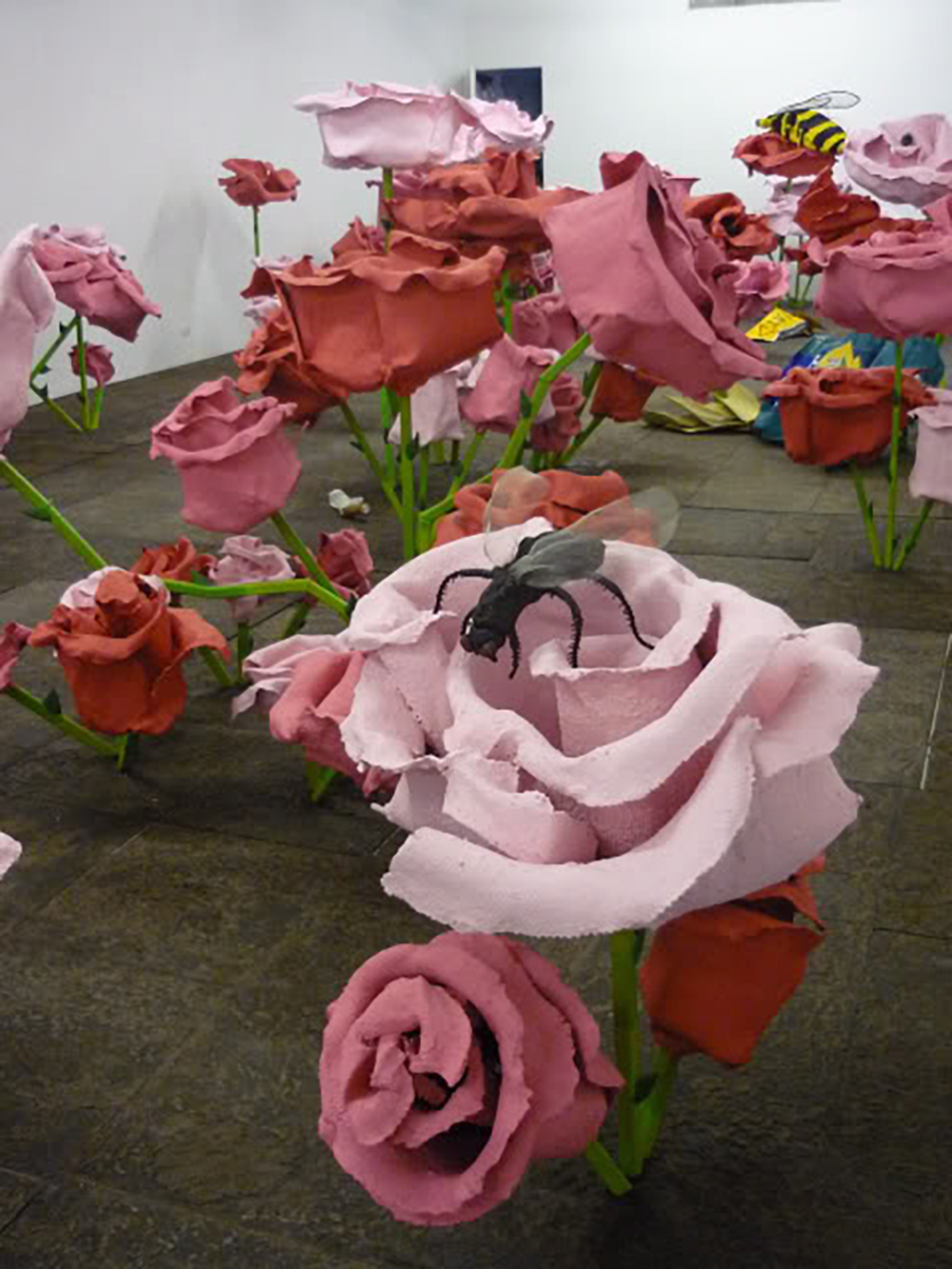 On Friday, Sept. 3 I had a chance to meet Will Ryman and preview his upcoming show “A New Beginning” at Marlborough Gallery in Chelsea. The installation consists mostly of oversized roses, but also includes insects and pieces of trash. The pieces are quite large, with the tallest pieces at about 6 or 7 feet, making for a “rodent-sized” view of this detritus-filled rose garden. The show opens on Thursday, Sept. 10 and runs through Oct. 10.

Will Ryman: It’s a monster installation. It took a long time. There are thirty-nine objects, thirty-nine pieces, all of steel, plaster, aluminum, paint, and epoxy resin. The floor is all handmade steel. We wanted to put it on a grid to bring the pieces together. When they’re all individual, it’s very formal. So, what kind of questions did you have?

Brandon Johnson: I just wanted to look at the show with you and talk about it. I had a couple of questions in mind, but we can discuss whatever.

W: And I was kind of going towards big corporations. I wanted to use the rose because it was a symbol of commercialism, Hallmark, you know. Also, I just love the way they look.

B: Aesthetically appealing, of course. So, as symbolic objects they sort of represent a thing that’s used in marketing or . . .?

W: The roses, you mean? Yeah, that plus the many other meanings attached to them . . .

W: Yeah, and globally. I wanted to make them look like they’re not so beautiful, you know? They’re wilted. There’s something edgy about them.

B: They’re cartoonish, sort of, what’s the word I’m looking for? Caricatures? Exaggerations . . .

B: Exaggerations of the actual thing. The stems are very straight and boxy, and the material is definitely present, which is a good quality, at least in my opinion.

W: Well, most of my work is about process so I always reveal the materials I use, the inner-materials, because I want to show how I made them. Process is important to me. Basically, I’m known for doing figures. So this is a new direction for me. Things are starting to change a lot. This is the beginning of the change. I’m working on stuff in my studio now that is even more different. It’s evolving. So, you know, we’ll see where it goes.

B: In terms of influence, for me someone that comes to mind is Claes Oldenburg, with the large scale and cartoon quality. But obviously that’s a generalization and he’s kind of a hard figure to miss.

B: But who would you name, if you had any general influences or for this show in particular?

W: Nothing for this show particularly, but I guess my inspiration comes more from writers than the visual arts. You know, growing up I was in an artist family, so I was around art. None of it really impacted me consciously. But old playwrights and philosophers inspired me a lot.

B: You were a playwright and sort of transitioned into visual art more recently?

B: So, you’re taking a very literary angle. I mean flowers are certainly one of the most literary of symbols you can find. You know, then there’s Baudelaire . . . these are almost a Les Fleurs du mal with the flies and hint of grotesquery.

W: Yeah, absolutely. I think I responded, when I was writing, to the absurdists. You know, Ionesco, Beckett, and I think that is where my aesthetic is, where I was respond to in my visual art. This is sort of an absurdist viewpoint.

B: Definitely. It has the kind of absurd comedy that Beckett and others had. Another Irish writer that I like, a fiction writer, Flann O’Brien . . .

B: He’s very much a black humorist, extreme absurdist.

B: But this reminds me of his work because he’s on the more cartoony side of Beckett, and I don’t mean to keep using that word, but . . .

B: Kind of taking it down to a smaller level.

W: Yeah, I exaggerate all the proportions, and nothing is to scale.

B: Right, that Titlest golf ball is enormous.

W: Yeah, do you know Williamsburg?

W: My shop is further east, just east of the BQE. So, if I threw a rock, I could literally hit the highway.

B: Gotcha. I just noticed the bag of chips over there. What brand is that?  I didn’t see the label.

B: This is like walking around in Brooklyn, especially Williamsburg. It’s something you’d see on the side of the street. There are a lot of growths, too, like on Metropolitan and Driggs there’s this huge bush.  I can’t believe something would grow that big from a crack in the sidewalk. But it was just covered in wrappers and trash . . .

W: Well, just think about the scale of a person, if they were looking down at this. It would be huge. If I had a figure standing outside looking at this, with a bag of chips. It would be great. But most of my work is about an experience. It’s interactive. I like to create environments, worlds that a viewer could walk in and experience.

B: Yeah, this is sort of an Alice in Wonderland, an Alice in Brooklyn. It’s really nice to have it at eye level. It’s not overbearing or towering, but it still feels like…

W: You’re the same scale as the trash. I wanted to go much bigger, to make people feel like bugs, but . . .

B: That would be a serious amount of work.

B: I like the insects, though. The ladybugs, what’s that black one?

W: A beetle or something.

B: Of course the flies, the bumble bee. I think it looks really great.

W: Each flower has a bug.

B: That’s a good piece of trivia. Well, thanks. I don’t want to put you on the stage too much, unless you had something else . . .

W: I can’t think of anything, unless there’s something else you had.

B: Actually, yes. I had seen an image of a previous work you had done, Bed.

W: Did you see it installed?

B: No, just an image. But one of the themes I saw carried over were some of the trash or wrapper items. That’s one of the things I immediately noticed of this installation, were things like the Doritos wrapper or the Ballantine’s, the art historical wink at Jasper Johns.

B: Which I thought was kind of cool because I was doing this project where I transcribed beer cans, transcribing all the language from the can, making it into a kind of concrete / conceptual  piece of writing.

B: But here you continue with the Budweiser, the Coke can. Anything in particular about junk food wrappers that is of significance to you?

W: Basically, I just wanted to use commercial junk food from corporations . . .

W: Wrigley’s, Y’s, Coca-cola, Budweiser. Just that whole thing was tied in with the symbol of the rose in its commercialism as well.  I mean no one would ever get that, and I didn’t necessarily want that to be . . .

B: It has this regional, even local, realism, with the Wise chips and other specific brands you would find in New York.

W: Right. Realist and also symbolic as pieces of trash with these corporate labels in the gardens. I was kind of hinting at that, but didn’t want to make it obvious. I was more interested in making it approachable. I don’t like it when I see things that are so heavy-handed and obvious, delivering a message that we all know.

B: I don’t feel that it comes off as that. I think if you recognize the labels that are used, you’re like “Oh, I’ve seen that on the street.” Literally. That’s just a fact of a street in New York.

W: Right [laughs]. Exactly. You know, I try to make stuff that is inspiring and . . . fun. You know, approachable.

B: So, this seems like it was a lot of work. How long would you say you were working on this at your studio?

W: Probably for 8 months. A lot of it full time.

B: Wow. And so you have a couple of assistants?

W: Yeah, two assistants. They help me build these things. I started off doing it by myself . . .

B: But realized you were going to need back up.

W: Right. I try to make things that are from my heart, that are approachable. Because a lot of what I see is stuffy and a turn off in some way.

W: Yeah, or you have to be at a certain status to even understand this.

B: Well, I think with the size, the general visual appeal, and recognizable objects, it comes together. Almost anyone could walk in here and be like, “Oh, I get it.”

B: Well, thanks for the time. Best of luck.