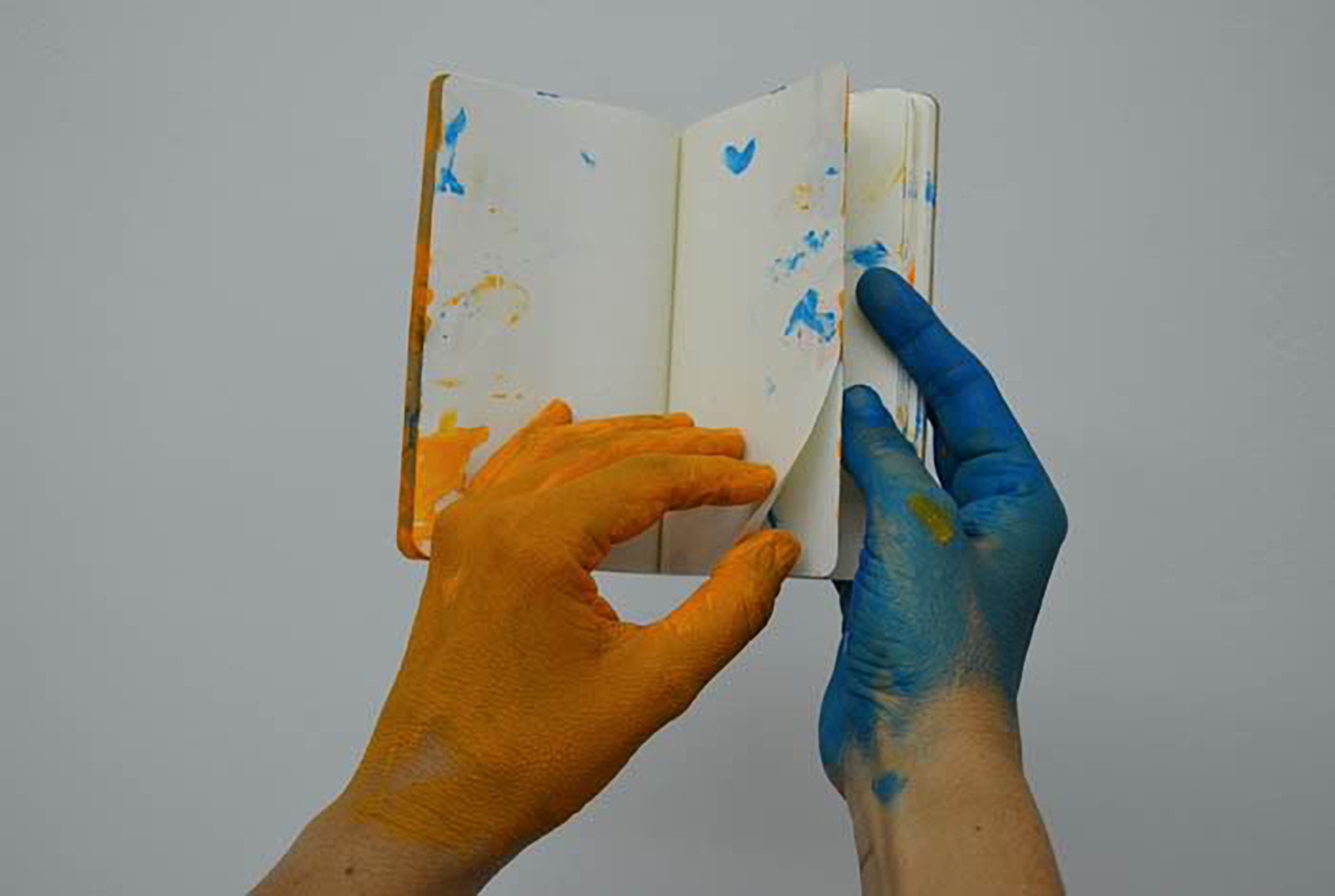 Rossana Martinez, See the World in Orange and Blue, 2011

“Telefone Sem Fio: Word-Things of Augusto de Campos Revisited” was a 2011 exhibition at The Elizabeth Foundation for the Arts organized by Telephone, a journal of translation edited by Sharmila Cohen and Paul Legault. The exhibition used Brazilian concrete poet Augusto de Campos as a point of departure for a group of poets, translators, and artists to “translate” across mediums using text, sound, and visuals. The exhibition featured exquisite original works by de Campos and a plethora of new work including highlights by Tom Moody, Rossana Martinez, Steve Savage & Jean-Sebastien Baillat, Macgregor Card, Angela Detanico & Rafael Lain, and Kenneth Goldsmith. A limited edition catalog produced by Ugly Duckling Presse became Telephone #3.

Is this Telephone’s first exhibition?

Yes, this is Telephone’s first art gallery exhibition. When Michelle Levy approached us, we were very excited by the notion of working with the EFA and expanding Telephone into a venue where all different forms of media could be present. In general, we have always been interested in the broadness of the umbrella under which poetry translation lies—this gave us even more room to explore.

How did you first learn about Augusto de Campos? Why base an exhibition on his work?

Actually, I’m not really sure. I think I’ve had a vague idea of his work for a while, but it was during the formation of this project that I really became familiar with him and his history. The more we researched him, the more he seemed like the perfect choice for the exhibition. Augusto de Campos is considered one of the founding fathers of the Brazilian concrete poetry movement—his work and ideas have been an influence on poetry, design, and art even up through today. Who better to pay homage to than a poet, translator, and pioneer of visual (and sound, shape, etc.) poetry?

Being that his work features such a wide range of media—written poems on paper to sound recordings to videos to websites and so on—it really suited our goals of creating an exhibition that featured poetry in translation while simultaneously fitting within a gallery setting. We really wanted all of our translators to branch out/feel free to vary their form and medium—de Campos’s poetry really seems to promote that.

His website with examples of his work and concrete poetry manifesto can be found here.

How did you decide on whom to curate into the show? It seems like a very
specific niche.

We always look for a mixed group of “translators” in order to get at as many variables, or differing interpretations as possible. Michelle Levy was in charge of bringing in artists and Telephone curated a group of writers. Of course, there is some overlap in these groups. On our end, we tried to get writers who seemed open to the idea of extending their work beyond the standard words on a page, or who were particularly interested in de Campos’s work, concrete, and Brazilian poetry. No matter what they all share in common, it was clear to us in advance that the execution would differ greatly.

I see that original Augusto de Campos books and prints were lent for exhibition by the Sackner Archive for Concrete and Visual Poetry. Can you tell me more about this organization? Is it open to the public?

After our co-curator Michelle Levy visited the Sackner Archive in Miami, she was convinced it was essential to have the original works in the show. This is the typical effect the archive has on its ‘public’—which is any interested party really who gets in touch with them to schedule a visit. There’s also a documentary available that outlines their holdings/mission. They maintain the largest private collection of concrete and visual poetry materials and were a generous resource for our show.

As these works become increasingly difficult to come by, and somewhat overlooked by Academic holdings, collectors like the Sackners form an essential link between concrete poetry and the contemporary artwork inspired/translated over from it—in our case, quite literally.

Telephone is about translation. This exhibition is obviously highly interpretive. There’s often a dichotomy in literary translation of staying faithful to the original versus taking a more interpretive approach. Do you have position, either within or outside of, this argument?

Being a translation journal that predominantly features highly interpretive work, I think it necessary to point out that it is no argument against faithful translation, but rather an argument for the many different modes of “translating” poetry. Rather than saying our position is by a particular type of translation, we are saying that there are so many ways to translate poetry and we find all of them valid and interesting. We always push our “translators” to approach the work in any way they see fit—our focus is to show that variety side by side, to look at the original poems from many different angles. I know that I’m arguing semantics here, but why shouldn’t, say, a homophonic or interpretive or visual translation be considered faithful, as it likely pays very close attention to reproducing specific aspects of the work.

Any more exhibitions/events in the works? What can we look forward to from Telephone?

We don’t have an exhibition planned at the moment, though we would love to continue curating and working with galleries. Outside of that, we do have a lot of exciting new things on deck. In the near future, we plan on pulling together a sound poetry issue that will likely be recorded on vinyl and provided with a sleeve insert that has scores, notes, texts, etc. We are currently in the process of becoming a press, Telephone Books.  Our first project as that incarnation, which we are making as an imprint of Nightboat Books, is a collection of English to English “translations” of all 154 of Shakespeare’s sonnets, each reworked by a different poet/translator (due out Fall 2012). That project is particularly exciting because we get to work with so many wonderful writers and they bring out so many varied interpretations of Shakespeare, texts most of us are already relatively familiar with. In the bigger picture, we also want to expand our press and start making things like art books, handmade objects, and so on. In general, we are always on the look out for new projects that expand the definition of what is considered translation and working with all different venues and types of media is always a part of the discussion.