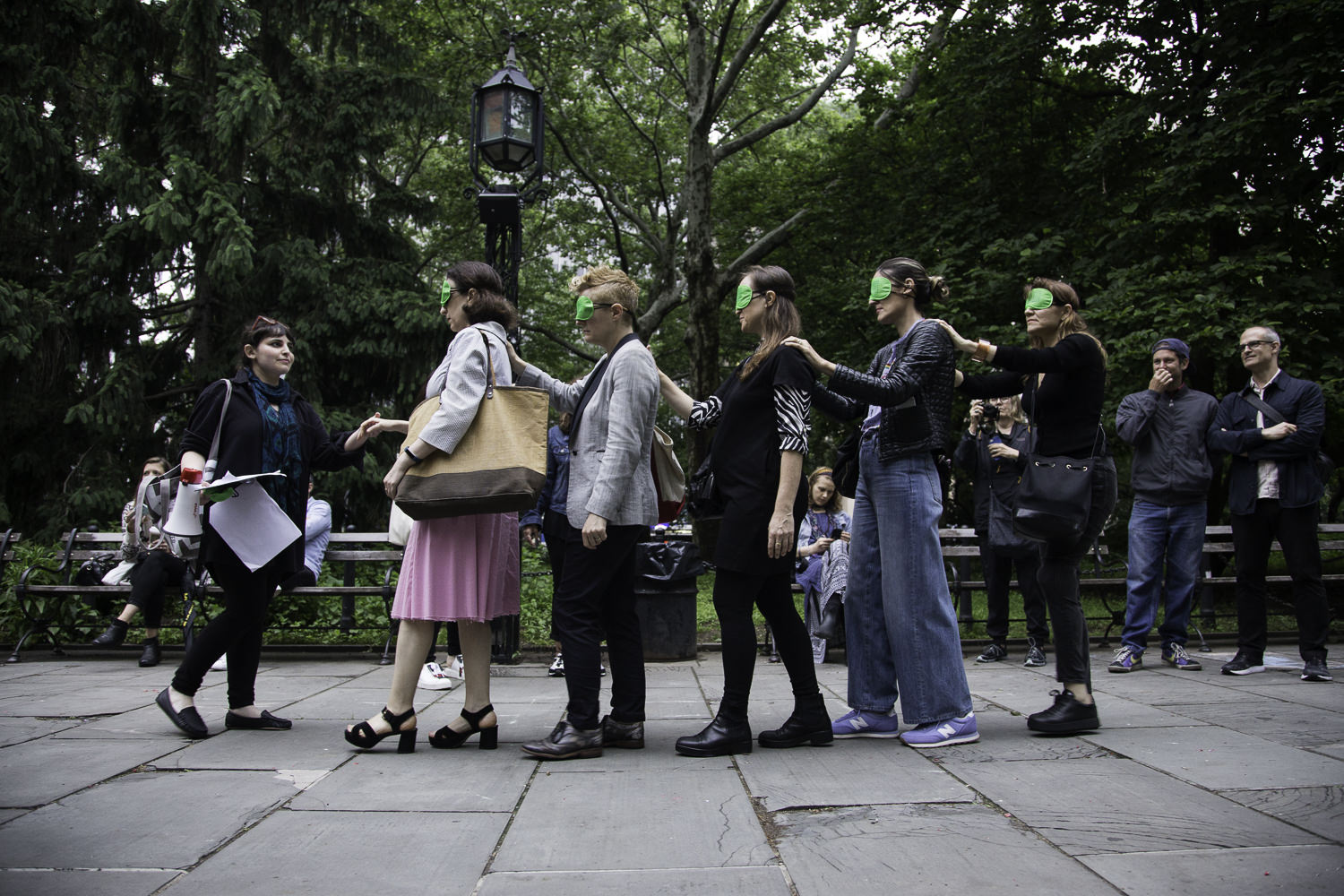 Sari Carel was born in Israel and lives and works in Brooklyn. Her work has been exhibited internationally in galleries and venues such as Artists Space, Nicelle Beauchene, Gavin Brown’s Enterprise and Dumbo Arts Festival in New York, and Tavi Dresdner and The Heder Gallery in Tel Aviv. She has recently partnered on projects with More Art, a New York based nonprofit that supports collaborations between professional artists and communities to create public art and educational programs that inspire social justice. These projects include Borrowed Light at Sunset Park, Brooklyn, in 2015, and Out Of Thin Air currently at City Hall Park in Manhattan. Out Of Thin Air is a multi-channel immersive soundscape of recordings taken from breathing workshops conducted leading up to the installation, in which respiratory illness, air quality, and environmental injustice are at the forefront. Out of Thin Air is on view through July 8th.

My interest evolved from a few different directions that suddenly came together in this project. The first is actually a personal one. My sister, who I am very close with has been living with an incurable lung disease, lymphangioleiomyomatosis. She is also a philosopher and her diagnosis jolted her into thinking about illness as a philosophical tool. Her essays and books, as well as witnessing her harrowing experience of learning to live with a disabling and incurable illness have changed the way I think about the experience of being ill and more specifically feeling breathless, or gasping for air. Her work has showed me how exquisite breath is, and how fragile. I also work a lot with sound and its relationship to other mediums. So from a sound practice perspective it was interesting for me to zoom in on these gaps and gasps that audio engineer painstakingly try remove to enhance a recording. For this project I wanted to remove everything else and just let us hear and think about breath as a rich and layered vocabulary that is largely invisible to our noisy lives.

You partnered with master teacher Jessica Wolf to conduct therapeutic breathing exercises with New Yorkers living with asthma and other breathing conditions. Recordings from these exercises were used to create the public sound installation. As an artist, do you feel a social responsibility beyond traditional notions of aesthetic beauty when creating public artworks?

I come from a hands-on studio practice and am very committed to the poetics and manifold meanings that can be generated from working with materiality and imagery, in the broadest sense of the word. But over the last ten years I think there has been a steady move by me towards realms outside the art world and outside my world as well as an intense curiosity about other fields of inquiry and research.

This led to weaving other bodies of knowledge into my work, collaborating with scientists, musicians and mathematicians among others. In my exhibition Earth & Sky last year I collaborated with an ornithologist and commissioned work from a craft conservationist. These different kinds of knowledge entered the bloodstream of the work at a very early stage and present themselves very differently from each other throughout the development of the project.

My interest is not just in mining other worlds for materials but to make a series of connections and welcome a whole other set of priorities, principles and ways of thinking into the studio and into the exhibition space.

For this work I wanted to take it a step a further and to develop a work process that from the beginning is tuned into and relies on practices from other fields as well as partnerships with people outside the art world. The workshops were amalgams of a few different things: Participants learned from Jessica Wolfe methods of breathing and exercises to help them breathe in a more sustainable way. We also talked about theories of Illness and ways of thinking about breathlessness. We delved into the recording process both as participants as well as producers. Having all these different vantage points over a period of two hours and leaving with a new set of tools and new insights into breathing practices was an important part of this communal activity. The sounds generated from these actions accrued meaning and vitality in large part because they were the byproducts of doing something together, for real.

I am very occupied with the possibility of making things reverberate in more than one way. I try as an artist to push against the insularity that can sometimes run through contemporary art, and I am truly curious as to what aesthetic repercussions can be derived from and divined out of intersecting activities.

Out Of Thin Air, which was commissioned by More Art, also includes a diverse public engagement program for this very reason. Let art be the occasion for bringing together a variety practitioners, thinkers but also audiences. To have many conversations not just ones that revolve around art and to include activities that bring people together in an act of making and doing, not just talking and viewing.

The site of the installation is City Hall Park. Did being offered a platform in close proximity to the epicenter for New York City government have an influence on this project?

Finding a location that fit the aesthetics and themes of this piece was a journey in itself. When the opportunity to present it in City Hall Park I was very much tempted by exactly that, before actually doing a site visit to determine if it would be feasible and be a good physical context for the piece. Considering breath, breathlessness and air as a commons that belongs to all of us is at the end of the day inextricable from policy.

What was your process for arranging the breath recordings from the workshops into a cohesive, public-facing whole? Anything you valued specifically in the recordings, and any impact you wished the final product to have on visitors?

Editing the strands of sound that I gathered throughout our activities and workshops was mostly done in my quiet studio. Playing around with the materials and trying out different sequences, types of layering and valuing how things come together but also the gaps that are created between different layers that don’t quite align with each other.

I ended up making three vignettes with various gaps between them. the silence in between is just as active as the parts that are full of sonic action. it allowed for a play between foreground and background and I hope they encourage the listener to tune into the sonic environment around them in a different way. Not just hear all the sounds and noises around you but listen and take in the textures they create. The 10 minute breaks between the plays of the complete breath composition aim for a more egalitarian act of listening. Art and site mesh in a changing, open-ended way.

Past projects of yours have also engaged with environmental concerns. Would you consider it a foundational role of your practice to bring attention to the world around us, both natural and unnatural?

Humans have evolved within a certain context, that context is planet earth. The environment is not something outside of me. My senses, with which I perceive space, landscape, language and art would not exist as they are without it. This relational process between the human animal and all other animals in the world as well as the landscape, the air, the horizon line and even gravity itself is at the essence of who we are as sentient beings.