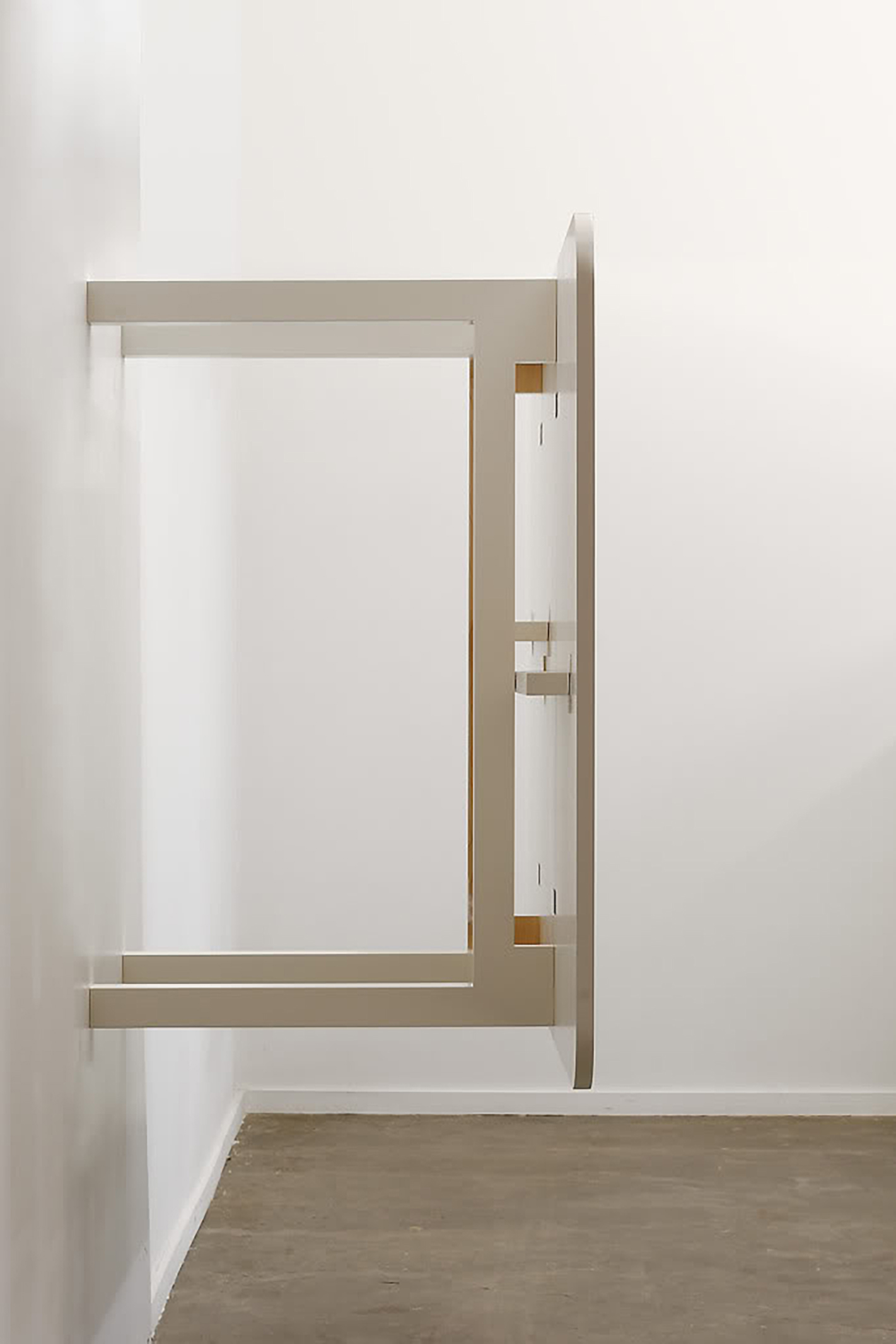 I’m a sucker for multi-disciplined artists, so being introduced to the work of Roy McMakin made me feel like a kid in the candy shop. McMakin is a furniture maker/designer extraordinaire with commissions like The Getty Museum on his resume. He is an artist/object maker—showing internationally not just at Lora Reynolds in Austin, TX but also at the Matthew Marks Gallery in NY. And he is a highly acclaimed architect with wonderfully fanciful and naturally familiar domiciles—domiciles immensely cherished by his clients in his portfolio. I’m a huge fan of his website www.domesticarchitecture.com so be sure to check it out, he just released a monograph “Roy McMakin: When Is a Chair Not a Chair”, and he has a solo show, In and On, at Lora Reynolds in Austin, TX. Did I say he is multi-disciplined . . .

Your fluency with color both in your architectural pieces and individual works is such a force, whereas in the works at Lora Reynolds there are just moments of color and White is an overall theme that you deftly contrast among all the pieces in the exhibition . . .

The white colors play Mondrian games on your tabletop canvas

The white contact paper reassembles the dresser—almost holding it together

The white netting meshes together the book photo series, as does the white of the book’s paper

And well, the pillows and pedestals are white

What does white mean to you?

What does white MEAN to me? Hmmm, meaning in color is such a wonderful riddle. I often remember as a child both considering and discussing with other kids what one’s favorite color is, with great seriousness. In a way it’s one of the early “things” I tried to make sense of. So, on to white.  It’s not a color, so in a way I am released from all my varied and intense color baggage. Which is important at times. But then again, it’s as much a color as any other color. I sometimes pretend it’s really invisible paint, not white paint. Or underwear. Which is to say white pretends it’s neutral (like black, only white) and instead it’s the most loaded of colors to me. I think the white of my slatback chair is trying to be discrete in the same way the modernity of the Eames (I think they are real Eames, or at least Herman Miller) tries to be discrete.  In a sense it exposes all the chairs for being filled with meaning and stuff. And the slight kinkiness of that piece wouldn’t be there if the chairs were not white, I think. But dorky kinky, like a flasher still wearing underwear. And white allows shadows to be seen the easiest of any color. Which is partly why I painted the dresser white (it’s not contact paper), as it asserts the sculpturalness of the thing. I could go on and on and on, as I think about this a lot, but don’t always get to be articulate about it, but you have other questions……

Actually, it is just a table, on a wall. It matters to me that it is a real table. I mostly see it as a love poem to a table. I kinda think it’s heart breaking in a way. It’s so pretty, even aspiring towards transcendence, but it’s just a table. And you can’t even use it, at least while its on the wall. I see it as about function/dysfunction, perception and how objects reveal themselves. And it is about painting, and sculpture, and furniture. I found in my journey with objects that minimalism helped me see objects, so I think of it less a play on minimalism than attempt to demonstrate the potentiality of both transcendence and mundaneness within objects, even the same object. Maybe it’s partially about “point of view”.

I hadn’t seen Lora’s gallery before I conceived this show, but I had done a previous show in her previous space, and I looked at the floor plans of this space a lot. So I definitely conceived this show for this space. I have wanted to build the table piece for a while, but seeing in my mind how it would work on the wall where we hung it was where I started. Then I came up with the title and then conceived the rest. I like the title. I might use it again. And, of course, I did the show with Lora and her lovely gallery team in mind. They are all so smart and serious about what they do I wanted to do a really great show. In other words I wanted to do a show that moved my investigation along in a serious way.

It seems you connect often with the work of somewhat indigenous architects i.e. Ellsworth Storey—Seattle, Irving Gill—California, and clearly to a lot of indigenous American styles from Shaker to Craftsman, to Mission and Prairie. Let us know your feelings about these influences/relationships. Have you heard about Austin’s own local hero/architect Abner Cook?

I tend to connect with proto or pre modern architects a lot. I don’t completely know why, but I think because they addressed of lot of things in a completely contemporary way; at times, I think, even more contemporary (to me at least) than the next generation of architects. I like architecture that can be rigorous but still be charming and sweet. I am very American in the way I see things, I’m kinda a homebody.  And I don’t know Abner Cook’s work—will you show me when I’m in Austin next?

Back in the ‘80s there was this commentary in the Village Voice about Jennifer Bartlett’s work at Paula Cooper. She was showing these paintings with lots of dark colors and flashes of bright orange. In front of the paintings she displayed bright orange objects, like a table for example. The Voice commentary quoted a collector out of Ms Cooper’s range asking her spouse if it was, “Okay to put the table in the closet?” should they buy the coveted piece. First of all, it seems that people that live with your work love it! And you embrace the idea that your works play with the line between object of desire and usability, and blur ownership and user. Can you talk about this in relation to the work shown at Lora Reynolds?

The functional use of an art object is so interesting. I figured out long ago that if, as an artist, you allow folks to use your works it changes everything. I think this is a deeply profound notion, and also kinda silly. I think I reached out to objects as a child for psychological reasons, and they were there for me. At one level they were safe because they didn’t cause me harm, but they were really just the remnants of human behavior. I went looking for love in objects because I wasn’t finding it in other places in my life.  As love seeking beings we can be keen readers of it. I was looking for objects that were the physical manifestations of love. And these were sometimes paintings and sometimes a chair. It didn’t really matter to me—I couldn’t see hierarchies as a kid. But my career has been bumping up against the very real hierarchies of objects since the beginning. My stuff at Lora’s exists in a funny place where the usability is both implied and real, but also kinda ridiculous. I think I do that to engage, demonstrate and illustrate the issue of use versus non physical contemplation, which I think is very real, but that in my own life I am nearly blind to.

Explain your relationship to building/designing objects as opposed to choosing/co-opting already designed objects or existing objects and manipulating them to achieve your ends? This is particularly true in “My Slatback Chair with a Pair of Attached Chairs” . . .

Well, that all depends on what my ends are. And my goal is generally a combination of exploring my romantic relationship with certain objects and trying to manipulate a viewers experience to replicate what I experience with objects. Basically, I see the playing with the difference between found objects and those made by me as one of the tools in my belt to get my point across. I guess what I am saying is, I see it as kinda the same thing, only different.

With all your pieces, initially it seems it is all “exterior”—how the outside of these objects are perceived. Perhaps address what’s going on “inside” (the drawers/pages) “underneath” (the pillows/table) “below” and “in between” (the chairs) . . . maybe speak about what is behind Oz’s Curtain?

Hmmmmm, I don’t know if it’s Oz’s curtain. I don’t think there is a little man inside making my stuff work. People know how to make them work. Everyone knows what to do with a table. Even one on a wall I assume. A book is always an exterior object until it is read. One could suggest that the people are missing, not the interiors. Or are they. You were there.

Roy McMakin’s In and On is on view at Lora Reynolds Gallery, 360 Nueces, Suite 50, Austin TX, Tues – Sat 11am-6pm, through May 15.  Visit www.lorareynolds.com for details.