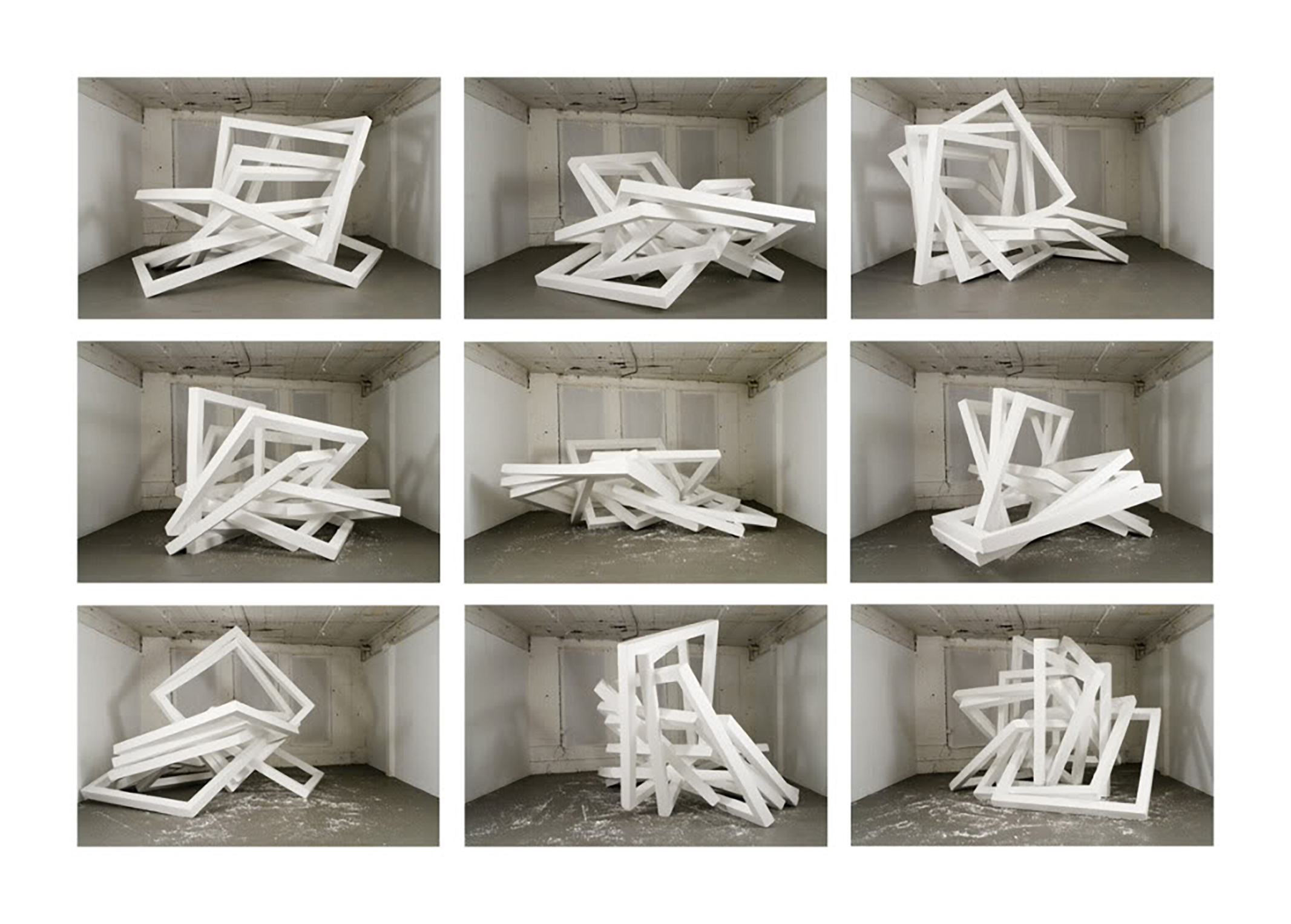 With a foundation in painting, Nils Folke Anderson now works in large-scale sculpture. His most recent works feature repeated interlocking geometric pieces that can be shifted into different formations and left to pose like the kids game of “statues.” At first glance, it’s Sol LeWitt meeting minimalist sculpture. But looking a bit harder, Anderson is going the opposite way on the same road, doing the two-finger wave as they pass. I visited Nils Folke Anderson’s expansive Sunset Park warehouse studio on a wet September Tuesday. Across the hall from Marian Spore, and with a view onto New York Harbor, the Statue of Liberty vague in the fog, it was well worth the shlep from Bushwick. The studio itself contained a large iron sculpture of interlocking bent rectangles with more yet-to-be-assembled pieces stacked on the floor, their scaled models lined up in a row. After a quick survey of these works, we headed up a floor to a smaller studio to discuss his work. Afterwards, we went looking for avocado milkshakes while talking trash about Blockbuster only to end up with a Vietnamese feast in Sunset Park Chinatown. Not bad at all.

Let’s start at the foundation of what informs your sculpture: the concept of “reciprocal linkage.” Can you explain it in your own words along with its importance to your work?

I borrowed the term reciprocal linkage from internet terminology, where it’s used to describe how multiple websites are linked to each other.

In my work reciprocal linkage is the term I use to describe a basic principle of interrelation, in which a number of elements that are essentially empty frames all link through one another. Together they create a dynamic, formless unity in which each individual element bears the same relation to the whole as any of the other elements.

Because all of the frame elements are made alike (same dimensions, material, etc.), a situation is created in which they are totally interchangeable, but also confined by this specific kind of linkage. I work in the openness of this space, interacting with a reciprocally linked object until I arrive at a stopping point, in which the elements make an interdependent stasis, all leaning on one another to form a configuration.

When we spoke at your studio, you related this concept to complex relational systems like economics, politics, with each piece affecting the great whole so as to shape the entirety. I like the idea of how this formation is alive in a way, and then reaches a point when you leave it to pose. This is a departure from more rational systems, like algorithms, used to create work. As the artist, you are directly involved in the aesthetic decision of how the piece will be arranged. How would you compare your sculptural work to someone like Sol LeWitt and why have you chosen to take the positioning away from either chance or systematic rationality and literally into your own hands?

Sol LeWitt’s means were logical and rational, but the results are also poetic and humorous and beautiful. I admire how his work manages to be rigorous and light at the same time.

In my work I am interested in a direct, tactile engagement, the kind of subjective, physical, and psychological engagement that LeWitt in some ways rejected. When I am configuring a reciprocally linked sculpture, I move it until it stands up on its own. Along the way there are things it will and will not do, depending on its size, material, shape, location, etc. The sculpture has a specific character, and the interaction that occurs engages an immediate, physical intelligence. The moment of resolution happens in an instant—everything is in play, and a moment later everything snaps into place and I am released. The sculpture and myself are separated. I assess the result and decide whether or not to reengage.

I am interested by the density of concerns that come into play at that moment, by the challenge of making the right decision when there is no right decision to be made.

That is the conundrum—when to let go. Especially when there is “no right decision to be made.”  Instead of logic, physics—gravity and friction—plays a role in determining the final form, among the density of concerns. We talked about this having a more ab-ex attitude. You said instead of repetition like LeWitt, there is “recursion.” How does this term fit in?

Recursion occurs when a thing is in relation to itself. It is the basic mechanism of deconstruction—that in placing the self-same in relation to itself something radically different might precipitate. Through recursion a novel face can arise from what had seemed stable and well understood.

In the case of reciprocal linkage, an indeterminate, liquid character emerges from what are completely self-equivalent square frames, simply by the act of joining them together according to a particular organizing principle.

Robert Smithson wrote a great piece contrasting “liquid” and “crystalline” thought, in which he advises the reader suffering from a liquid mind to make a mud pool and watch it segment as it dries. But I’m interested in the whole event he describes, the muck and the cracked polygons of dry clay, and what occurs along the way. I’m pursuing a continuum that absorbs it all.

You mentioned the Brazilian artist Lygia Clark as a primary influence. How does she fit into the picture?

Lygia Clark made a body of work called Bichos in the early 60’s, which she built by hinging together metal plates. These sculptures are meant to be manipulated by the viewer into various forms. “Bicho” means beast, or animal, or bug, and the basic proposition is to create a tactile/visual dialogue between a person and this object, an object that—through the interaction—takes on a kind of internal life based on the nature of its construction. There’s a tension between the will of the object and the will of the person touching it, and a decision to be made regarding when and why and how to disengage.

These sculptures also continuously empty themselves—they are the opposite of a palimpsest, because there’s no trace of what forms they have previously taken. Every movement simultaneously creates a new form and destroys the prior form.

I once recreated a Bicho, in steel rather than aluminum, and I was struck by the conundrum of the stopping point that this work presents. I still am.

I find it interesting for a painter to move into sculpture. How did you decide to begin working in sculpture? How would you say your background in painting has influenced your sculpture practice?

I’ve built things all my life, and because my art making was oriented towards painting for a long time, I had the benefit of making objects without thinking about them as artworks. I taught carpentry, built mud houses, worked in construction, made my own furniture, never thinking about art exactly. I’m making steel sculpture now, but my education in steel came from helping my brother build domination equipment for S&M dungeons. Later I worked in the wood shop of a framer and found a book on Japanese joinery and immersed myself in that world. All of this was a respite from art, and I developed a facility with materials and structure along the way that is now central to my art.

It was my engagement with color that provided the bridge between painting and sculpture, specifically the understanding of color as something that has three dimensions (light/dark value, hue and saturation). Color interaction happens within a three dimensional color space, it happens densely and all at once, and something analogous happens in reciprocal linkage.

I made the jump from painting to sculpture because I sensed that possibility. I had also recently become a father, and the tactility and vividness of holding this little living being gave an urgency to this transition to sculpture. It was a good moment for change.

Going back to Lygia Clark, she was bothered by the non-presence of the backside of paintings. She folded that empty space into her Bichos. She didn’t eliminate that void, but rather turned it into an active element of the work. That image—of contemplating the reverse side of the painting—also instigated me towards sculpture.

Wow, so your sculpture truly has a solid foundation in craft too. The S&M thing is quite funny considering Robert Morris’s famed poster in all the gear, but also something I would never have guessed you had done. At the studio I got a sense of the reciprocal linkage emerging, with your Peter Halley-like paintings demonstrating a degree of inter-linkage already. The transition to sculpture seemed quite natural, especially now that I’ve learned your experience in building and craft. Good deal. So, what do you have coming up we can look forward to? I know you just opened a group show at Nathan A. Bernstein & Co. Tell me more about this and other upcoming projects / events.

I’m working on several outdoor sculptures, including my first permanent public commission. And I’m painting again, after a hiatus of several years, preparing for a show next year that will have both painting and sculpture.

The show at Nathan Bernstein is a group show of light art, with Dan Flavin, Keith Sonnier, Anthony McCall, Jenny Holzer, among others, beautifully curated by Nicole Berry. I have a reciprocally linked neon piece in it, my first neon sculpture with multiple colors. The neon sculptures have these discrete elements in them, like my other linked work, but with one continuous electrical series running through them, and one continuous field of light.