ENTER THE WORLD OF BLAB! WITH MONTE BEAUCHAMP 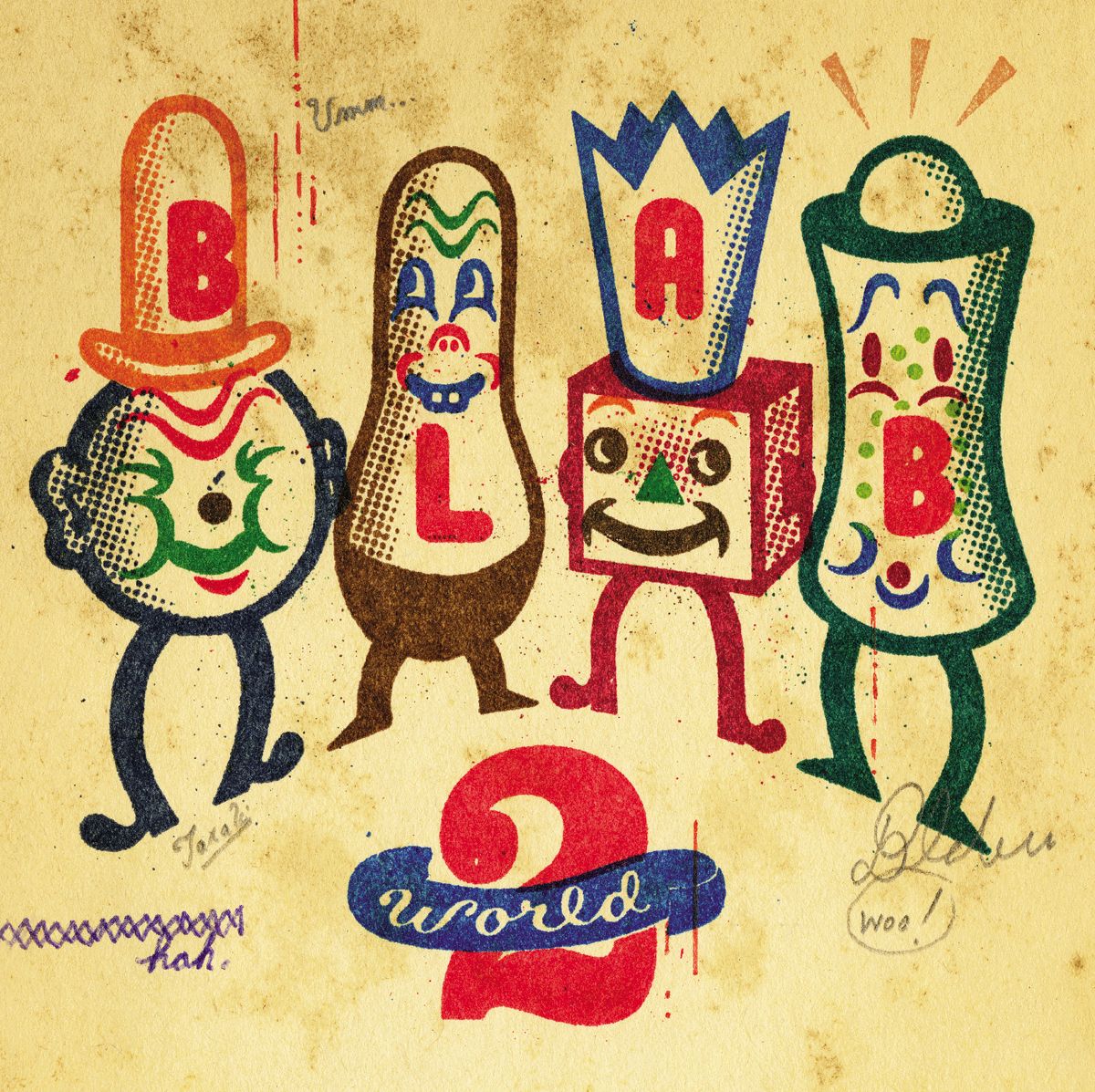 Monte Beauchamp is the award-winning, Chicago-based founder, editor, art director, and designer of BLAB! magazine, a comics anthology first published in 1986 as a self-published fanzine, with book projects including The Life & Times of R. Crumb (St Martin’s Press), Striking Images: Vintage Matchbook Cover Art (Chronicle Books), The Devil in Design (Fantagraphics), among others. BLAB!, in its current form of Blab World,  is now a highly-regarded venue for contemporary artists working in sequential and comic art, graphic design, illustration, painting, and printmaking—a love song to these underground worlds often placed on the periphery of the visual arts. Monte teamed up with photographer Paul Elledge to produce BLAB! magazine: Inside Out, a project in zingmagazine #21 in which the artwork within BLAB! finds its way out into the cold, cruel streets of Chicago. I met Monte for the first time in 2010 at the opening of the outstanding BLAB! exhibition he organized at the prestigious Society of Illustrators in New York. I’m now fortunate to once again get to opportunity to speak to Monte about BLAB!, his project in zingmagazine, the world of print, and his newest book, Masterful Marks: Cartoonists Who Changed the World, published by Simon & Schuster, which features top illustrators telling the stories of sixteen monumental figures in the world of comic art and pop culture, including Walt Disney, Dr. Seuss, Charles Schulz, The creators of Superman, R. Crumb, Jack Kirby, Winsor McCay, Herge, Osamu Tezuka, Harvey Kurtzman, Al Hirschfeld, Edward Gorey, Chas Addams, Rodolphe Topffer, Lynd Ward, and Hugh Hefner.

What did you set out to achieve in founding BLAB! magazine?

There were no grand plans whatsoever. How BLAB! came about was a total fluke. One evening after work back in the mid-’80s, I began bellyaching about shenanigans taking place at work where I was employed as an art director. To help take my mind off it, my wife at the time suggested I draw a comic book, which I didn’t have the desire to do, but several days later the idea of creating a fanzine about comics flashed in my head.

I had always felt that if it weren’t for MAD magazine, the sixties counterculture may never have happened. MAD ingrained in its readers the ruse of advertising and the distrust of corporate authority. MAD‘s publisher, William M. Gaines, also issued a very fascinating line of comic books known as E.C.’s, featuring incredible page-turners such as Tales from the Crypt, Weird Science, and Two-Fisted Tales, which were discontinued during the great comic book witch hunt of the mid-1950s.

So I decided to contact the counterculture cartoonists themselves to see if they’d write essays about what influence, if any, MAD and the rest of the EC line had on their work. And much to my surprise nearly all of them gave the project a thumbs up; they agreed to blab about it—which in turn gave way to the title BLAB!

So I self-published a one-shot limited edition of 1500 hand-numbered copies which I schlepped around to independent record, book, and comic book stores and placed on consignment. I also placed a few ads in several comic book publications.

Not long after, I went to the post office box on a Saturday morning and it was jam packed with orders; it was like this for a good solid month and then came a lull in orders—and then four to six weeks later, the post office box again became jam packed with letters, this time with letters from fans raving about BLAB! and inquiring when the next issue would be out, which in  turn inspired me to attempt a second issue.

The same week that BLAB! #2 was printed happened to coincide with Chicago’s big summer comic book convention, so I brought a handful of copies to show around hoping to drum up sales. Kitchen Sink Press—which published the work of several of my heroes: R. Crumb of Zap Comix fame; Harvey Kurtzman, the creator of MAD; and Will Eisner, considered by many to be the father of the graphic novel—was exhibiting there so I gave a complimentary copy to its founder Denis Kitchen, who flips through it, and immediately offered me a publishing deal—which blew my mind. Right then and there we sealed the deal with a handshake.

Denis tripled BLAB!‘s press run, expanded its page count, and we also reformatted it as a square-bound, digest-sized paperback. I began adding more comic book stories by the incredible Joe Coleman, Zap artist Spain Rodriguez, and a talented newcomer—Richard Sala. I also assembled a compendium on the influence R. Crumb had on popular culture (which 10 years later was expanded into a trade paperback published by St. Martin’s Press—The Life and Times of R. Crumb). That same issue also sported a magnificent cover by RAW magazine artist—Charles Burns. Partnering with Kitchen Sink Press put BLAB! on the map; from the incredibly brisk sales, I knew we were on to something. Four years later, issue #7 of BLAB! won a Harvey Award (the comics industry’s equivalent of a Grammy) for Best New Anthology of the year.

So that’s how BLAB! got rolling; it was never something I set out to do—it was just a matter of being in the right place at the right time. I had no inkling whatsoever that BLAB! would take on a life of its own and evolve into the full-color, hardback compendium of comics, illustration, found graphics, and articles that it is today.

How does a typical issue of BLAB! come together? Do you always have specific artists in mind for each issue?

Nowadays the process is very nonlinear, intuitive, one that starts with a single inspirational idea and builds from there. For example, I was walking around downtown Chicago one afternoon when a humongous storm hit. Massive gusts of wind were whipping all sorts of objects about and as I ducked for cover, off in the distance I saw a funnel of garbage swirling about in the air being sucked skyward. It was an eerie yet awe-inspiring sight, which set me thinking about The Rapture—and then a scene of people rising skyward interpreted by BLAB! artist Ryan Heshka flashed in my head. So I ran the concept by Ryan who dug the idea, and created a masterpiece. Ryan’s painting was so inspiring I began asking other artists to create “end-of-the world” scenarios that I compiled in a feature titled “Artpocalypse” for the first issue of BLAB!‘s sister publication BLAB WORLD, which in turn set the tone for the comic strips and feature that appeared  in that of volume.

You curated a project in zingmagazine #21 called “BLAB! magazine: Inside Out” which features various works that appeared in issues of BLAB! in different formats and mediums and photographed these in outdoor environs around Chicago. It’s sort of a magazine within a magazine—a peek into the world of BLAB! What inspired you to present BLAB! in this way?

Actually zingmagazine did. One aspect of zingmagazine that I always admired was it’s offbeat curatorial nature, which inspired photographer Paul Elledge and myself to present BLAB! in a similar fashion. Rather than shoot the artwork in a hoity-toity setting—such as a gallery—we took a less precious approach and photographed the artwork itself sticking out of garbage dumpsters, in alleys, and on the streets of Chicago. 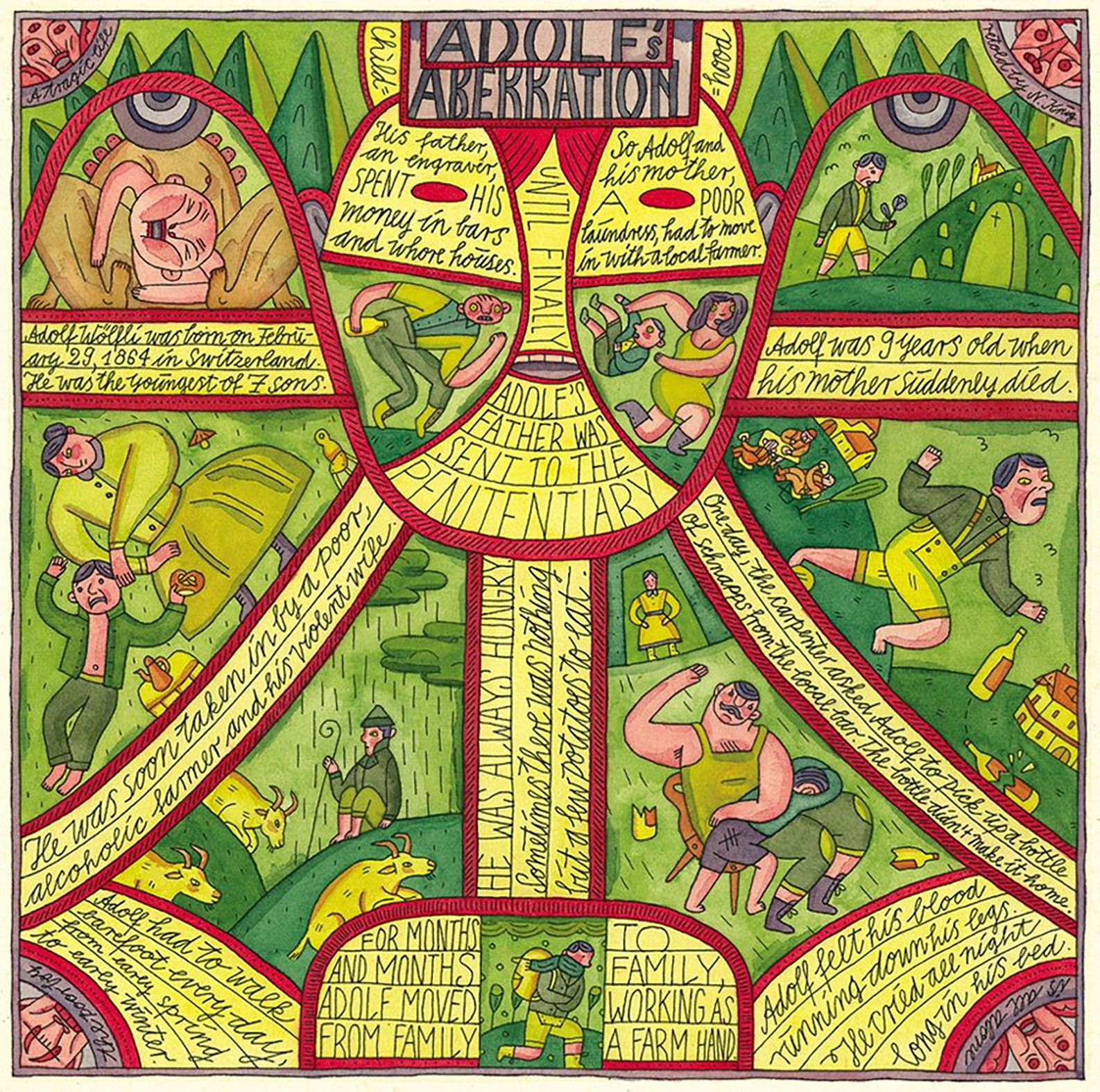 Your new book Masterful Marks: Cartoonists Who Changed the World is a collection of biographies of 16 legendary cartoonists presented through an equally graphic medium as created by other illustrators. There’s a double curation here—first the subjects, and then their corresponding artists. How did you conceive of this idea, and how did you select each group?

In late 2007, I was fishing around for an idea for a graphic novel to produce and the media blitz surrounding the release of the final Harry Potter novel earlier that year set me thinking about the far-reaching effects fictional characters can have on the world. I began thinking of popular literature equivalents from generations before. Mary Shelley’s Frankenstein came to mind as did Sir Arthur Conan Doyle’s Sherlock Holmes, followed by Edgar Rice Burroughs’ Tarzan—whose successful spin-off as a newspaper comic strip set me thinking about cartoon characters of equal iconic stature. Disney’s Mickey Mouse flashed in my head, followed by Dr. Seuss’ Cat in the Hat, followed by Siegel and Shuster’s Superman—the archetype for all superheroes. And then it dawned on me—had it not been for iconic comic characters such as these, the entire cartoon industry as we know it today wouldn’t exist. So I pitched my New York City agent on a collection of short-story biographies told in the very medium the industry itself had spawned—the comic strip—about the monumental creators who pioneered the entire cartoon medium—from syndicated newspaper comic strips to comic books, manga, graphic novels, caricatures, gag cartoons, children’s books, and animation. She loved the idea and that’s how Masterful Marks: Cartoonists Who Changed the World came about.

Any particularly difficult editorial decisions in this process?

Such a grandiose undertaking is an obstacle course, there are always editorial hurdles to get over, roadblocks to maneuver around. Fortunately my agent sealed a deal with a wonderful, seasoned editor at Simon & Schuster—Anjali Singh. Anjali, what can I say except that she is an incredibly insightful, intuitive, and brilliant senior editor who has a knack for signing fresh and original projects. For example, she brought the graphic novel Persepolis to America, which became a hit and was turned into a feature length film. Anjali turned out to be a dream editor to partner with; we really worked well together and she backed me 100% on the team of illustrators and cartoonists I assembled—fabulous seasoned talents by the likes of Drew Friedman, Peter Kuper, Sergio Ruzzier, Nora Krug, Arnold Roth, Greg Clarke, Nicolas Debon, and so forth. As Masterful Marks was nearing completion disaster struck—Anjali, along with several dozen other Simon & Schuster employees, were laid off. When the news arrived that we wouldn’t be ushering Masterful Marks into the world together, I was devastated. Completely. The very person championing my book was gone and all sorts of turmoil can happen when a book is orphaned. Fortunately, the project landed in the lap of a junior editor who got the project back on track. And then as we were completing the book, what happens? He takes a position with another publisher, and Masterful Marks landed in the lap of yet another junior editor, Brit Hvide, who did an admirable job ushering the book into print. After seven years, Masterful Marks was released this past September and received incredible accolades and reviews from the press. For example, it was included in Entertainment Weekly’s “The Must List,” plugged in USA Today, The Huffington Post, and Library Journal. A most wonderful and totally unexpected perk was receiving a letter from Hugh Hefner (also featured in the book) stating that Masterful Marks was “… a grand compilation.” 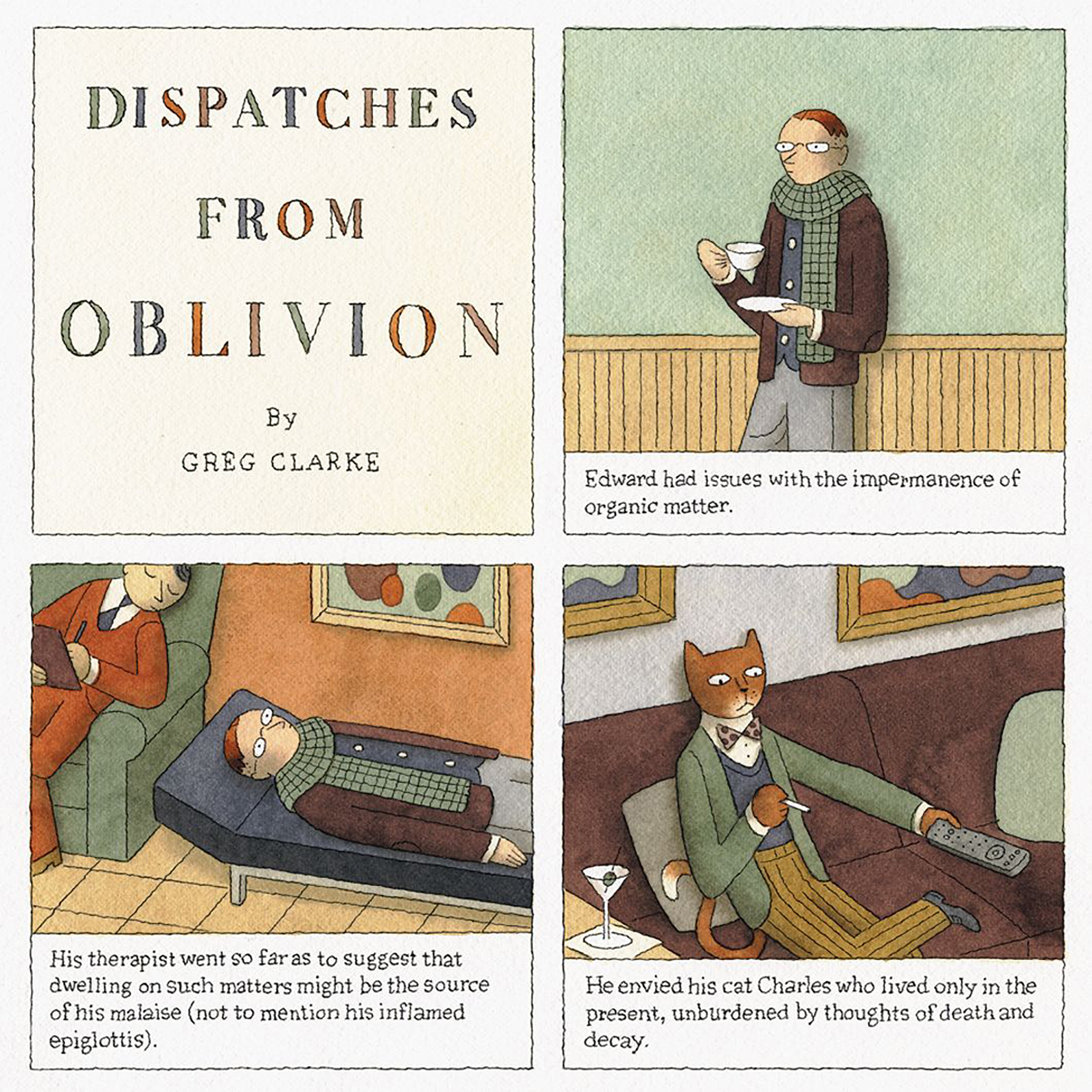 Why do you continue to make print books in this dematerializing world of media?

Well, there’s a caveat to all of this. As long as I’m allowed to edit, design, and package visually content-driven books that I have an intense passion for, that I believe in one-thousand percent, I will continue to create books. It was a long, arduous road to get here. Looking back on the unexpected twists and turns my professional career has taken, I sometimes ponder that had I remained in advertising, I’d have a house all paid off, a hefty savings account, and my dream car—a light green ’56 Chevy with a 3 speed column shift to tool around in. Yet, on the other hand, a rewarding career isn’t always about money, it’s about the love of the game.