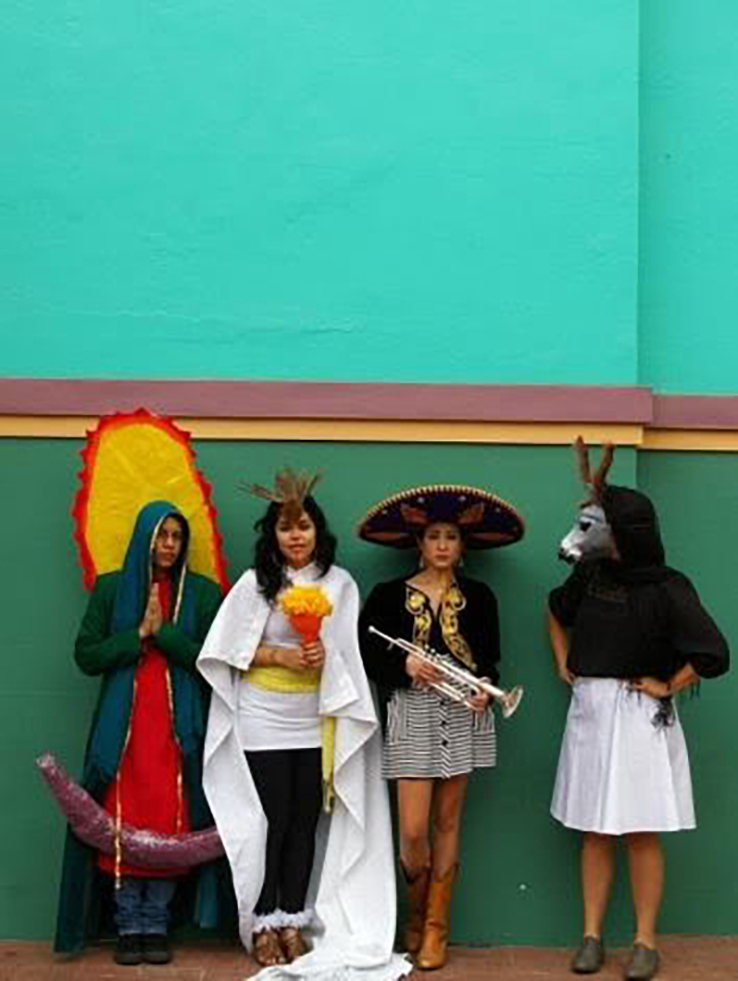 The San Antonio based Más Rudas Collective [MRC] is Ruth Leonela Buentello, Sarah Castillo, Kristin Gamez, and Mari Hernandez. “Más rudas” resists English translation. Instead, a demonstration: the four artists were recently kicked out of the Alamo by security—the strong arm of the Daughters of the Republic (of Texas)—for showing up there in costumes including a mariachi, an Aztec princess, the Virgen de Guadalupe, and the Donkey Lady of San Antonio (a local urban legend). Another act implied in their name is the simultaneous ancestor-honoring maintenance and radical revision of what it is to be Chicana/o. They refuse to relinquish identity to the altar of contemporary art. This tenacity has been rewarded in their short, rocketing career with a residency at Slanguage in Wilmington, L.A., installations and solo shows at the Mexican American Cultural Center in Austin and the Guadalupe Cultural Arts Center in San Antonio, the cover of Chicana/Latina Studies: The Journal of Mujeres Activas en Letras y Cambio Social, and in Fall 2012, the Window at Artpace San Antonio, to name a few.

I have been following Mas Rudas Collective since the “Quinceanera” show a couple of years ago now. I have questions I’m eager to ask about that show and the really rad projects that have happened since, but first, can you tell me how you all decided to come together as a collective in the first place? Do any of you still maintain studio practices on your own, or is this an all-in kind of deal?

Our efforts towards establishing an all female collective was sparked by Mari Hernandez. We started collaborating in efforts of having an all female DIY art show, “Our Debut,” in December 2009 in a friend’s living room. We all welcomed the opportunity since we felt the SA arts community overlooked Mexican-American artististas and because we didn’t connect to the majority of art being shown in San Antonio. Through our collaborative efforts in discussing, creating and organizing “Our Debut,” we decided to continue collaborating as a Chicana collective, which we solidified under the name, Más Rudas.

Individual studio practices are still kept while the collective works together on our collective exhibitions. Each form of practice, individually and collectively, ignites a flame in the other.

It is saying much to say that Mexican American artists are overlooked in San Antonio. I’m definitely intrigued. Can you specify what you all mean when you say “the SA arts community”? I am pushing this because many San Antonio institutions claim to do precisely just that: represent Mexican American artists. I’m thinking here at some radically different registers as well. The Smithsonian associated Alameda Art Museum and the grassroots San Anto Cultural Arts, to name just two out of perhaps a dozen, are obviously very different, but they do share that claim. But you are saying something was still missing. And I wonder if the crux is generational: our generation has such a tense insider-outsider relationship to the notions of El Movimiento and La Causa for instance (moments some institutions attempt to capture as their acts of “representation”, e.g., the Alameda’s Protestarte show of decades old protest posters). We weren’t there in the 60s and 70s, but the living legacies of those times are always very present in our daily lives, especially when living in a city like San Antonio. Or perhaps it’s a mix of that and gender. I’m thinking of the fact that some key pieces in “Our Debut” were premised on the recognition of an absence; that though the artists, some of you, are Chicanas, you had never had a traditional quinceanera. Each generation seems to undergo major shifts in how or whether Mexican traditions live in our US/Aztlan lives. We can think back to Pachucos and Pachucas for instance. What was not being represented before Mas Rudas began working in San Anto? And how is that absence addressed in your projects? It may or may not have anything to do with the issues I have raised here.

For us, to be Chican@ is to be Mexican American. From our experience, to be a Mexican American artist and refer to ourselves as Chicana is something, we’ve realized, is not readily acceptable in the art world. Identifying as Chicana has lead to some criticism. We’ve been told that we are pigeon holing ourselves as artists and limiting our opportunities. We’ve also been told in order to be successful we would have to make art that represents things outside of our culture and community. If our voice as Chicanas was represented than the fear of the label wouldn’t be as common. Because of this fear we feel as if we are overlooked.

While San Antonio has a large, diverse, and vibrant art scene it is rare that we are able to go out and see art that reflects our experiences. There are a handful of cultural art institutions that cater to Chican@ artists and we are thankful for that. The major art institutions in the city are predictable in the artists they show and represent. Rarely will you see a woman of color as a feature.

We realize that we owe much to the Chican@ artists and leaders that came before us. These individuals have paved our way and are a source of inspiration. Time and place set our views apart. We have different ideas and we were born into a different world, therefore the art we produce is different.

We know many artistas, many Chicanas who deserve as much, if not more, recognition than we have gotten. We are adding to the underrepresented Chicana voice in our community, not creating it.

How does the name Mas Rudas reflect this position?

Mas Rudas is a name that we created, embraced, and defined (because we can). With our name we take an unapologetic stance. It is the pride we take in who we are, where we come from, and the work we produce.

As an adoptive parent to a West Side San Anto dog,—shoutout to Gobo—I really appreciated operation canis familiaris. What was especially striking was the range of representations of dogs; the hagiographic portraits and altares, the crime-scene-esque floor piece, and the immersive, narrative environments, just to give some idea. It also made me look again at works like Francis Alys’ El Gringo and Helena Maria Viramontes’ novel Their Dogs Came With Them. There are some interesting conversations to be had there. What was it about dogs that enticed you all as artists? Did you get to know any dogs particularly well doing the project?

The city of San Antonio has a major problem with stray animals. While in recent years the city has created programs that raise awareness regarding the issue, it’s a problem that won’t go away unless the community becomes involved and takes action and responsibility. Sometimes we see dogs that are more like accessories, representing a level of machismo or affluence. Some are chained in a yard all day, acting like an alarm system, warding off possible intruders. Others are running around in our neighborhoods, neglected, hungry, dieing in the streets, and reproducing at alarming rates. We want to bring awareness and promote dialogue about the issue. Sometimes you have to be creative in your presentation in order to grab attention. There is a growing community of stray animal supporters in San Antonio.

These are people who have taken initiative and dedicate their lives to saving neglected, hungry, abused, and uncared for animals in our streets. They selflessly give their money, time, and energy to fixing a huge problem in our city.

Most of the dogs presented in the installation were strays. Mari Hernandez’s dog portraits concentrated on family pets that were rescued.

What was it like working on “Homegirls” in LA? Did any ongoing relationships or collaborations come out of that show?

“Homegirls” was based on work featured and inspired by another member of our collective. This gave us the opportunity to explore our relationships. Developing our relationships is essential in our collective process. It adds depth and cohesion to our work. Spending a week with each other and driving to and from LA was a great bonding experience. We even got a Más Rudas tattoo to mark that important moment in our lives. We are a family.

Homegirls has been our first and only out of state exhibition so far. During our time in L.A. we were able to meet and speak with likeminded artists. We feel as if the Slanguage community truly embraced us. It was a very welcoming environment. In retrospect we see many similarities between San Antonio and Wilmington. The warm people, the culturally thick environment, and the sense of pride and responsibility the people shine with reminds us of our own city. Karla and Mario (Slanguage) were excellent hosts and really provided us with an opportunity that has helped us grow as a collective as well as individuals.

Does the concept of rasquachismo figure into your conversations as you create together? I am wondering how, if, this idea has currency for young Chicana/o artists today.

It definitely does. We concentrate on producing in practical ways because we have to. We are just like any other individual trying to hold down multiple jobs, juggle work and school and pay the bills. Rasquache means to make the most from the least. It’s embedded in our culture and our way of thinking. It’s also something we are very aware of because we want to show that you don’t have to be rolling in cash in order to be an artist or to be creative. It’s nice and a definite privilege to have the financial means to support your creative dreams but it’s not necessary. There are ways to work around a lack of funds, that’s rasquache.

I am really excited to see what y’all will do at Artpace, where Mas Rudas will be in the Window Works artists starting in September. What was it like to receive that invitation? Can we get some ideas of what we might see?

Artpace is a leader in contemporary art and their invitation to us was a great compliment to us as artists. This opportunity will expose us to new audiences around the world. We hope that our (a small group of Chicanas whose first show was out of the living room of a friend’s house) invitation to Artpace encourages fellow artists in our community to reach far and wide.

In true Mas Rudas fashion our upcoming installation at Artpace will transform and activate the space provided. We promise our theme to be thought provoking y puro Mas Ruda.