MARIA ANTELMAN IS DISASSEMBLING NOTIONS OF TECH & SELF 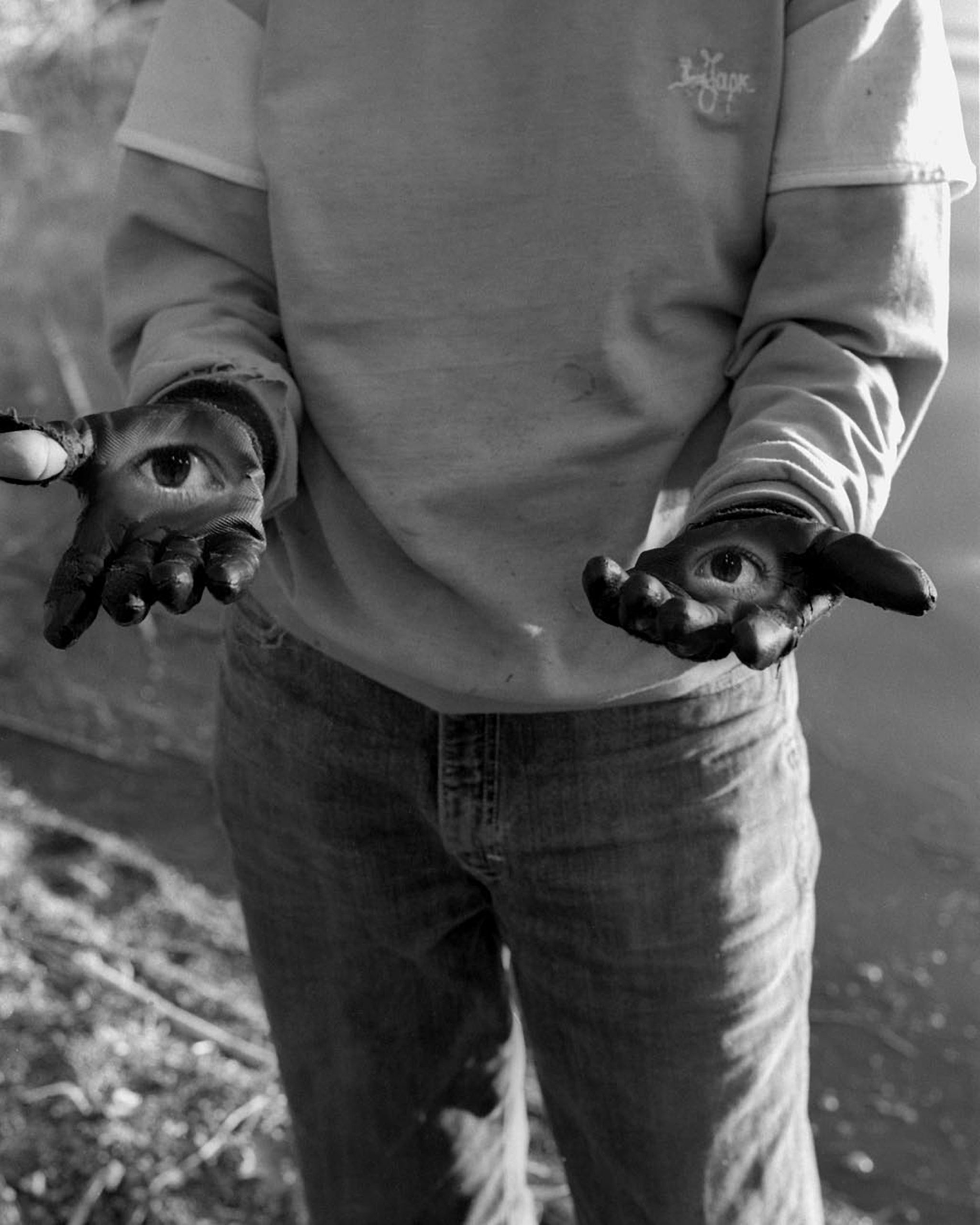 Maria Antelman is a New York-based Greek video artist and photographer. Her work focuses primarily on the relationship between humans and technology. Her project “The Spacesaver,” curated by Melanie Flood, appears in zing #25. Antelman’s solo show “Disassembler” is on view at Pioneer Works in Brooklyn until February 10th.

Your project “The Spacesaver” in zingmagazine uses similar imagery of eyes and hands as your current show “Disassembler” on view at Pioneer Works. What is the significance of using eyes and hands in your work?

“Spacesaver” is a series of photomontages, showing hands moving in and out of screens, touching information, specifically microfilm which is what big data used to be. In the video Disassembler, hands become one with a central system that controls them, like puppet hands. Here, rural workers hands are guided by the technical specifications of a wristband that Amazon patented for their warehouse pickers. I am thinking of hands as body parts but also as tools and as extensions of our technology How do the functions of the hand change, based on the technological evolutions? One example is how digital technology requires touching a lot of screens but at the same time touching becomes a less tactile experience as all media is digital. One touches to command rather than hold a physical object or medium like film, vinyl, printed books, etc.

In terms of the eye, we live in a panopticon economy. Surveillance and data collection are the hottest industry. At the same time, our eyes have become cameras, and we desire to capture and “share” everything we see (our social personas are the accumulation of what we have captured and shared). In my eyes, the “I” is an eye and how timeless the slicing of the eye scene from Buñuel’s film Un Chien Andalou! Our eyes or cameras produce and transmit images while at the same time these functions are recorded and analyzed by other, technical cameras and eyes. Technical vision creates this new awareness. Things and objects become smart and intelligent and their gaze is upon us. We create our technology in our image and in our likeness, and then it feels uncanny when we discover ourselves in it.

The title “Disassembler” stems from the name of the software used to transform code into a language that humans can understand. There seems to be a similar transformation that occurs when verbalizing visuals. As a non-American artist, do you feel that describing your work or translating it into English is also part of a process similar to “disassembler”?

I grew up in Athens and at the age of 18 I went to study in Madrid where nobody spoke English or any Greek. I was fully immersed and after a few years my thinking process was in Spanish, which at that moment felt like an incredible realization. Now, I have been living and working in the US for 18 years and I think of my work only in English. English is easy to work with because it has an administrative simplicity while Spanish is emotional and Greek is complex, wise, and sculptural. I am trying to maintain a multilingual situation, switching between the three languages and their different glossological idiosyncrasies.

Disassembling a language is understanding its syntax. To understand the syntax, one has to learn the grammar. When we were taught ancient Greek in school, we were given a text which we had to translate by conveying its sense (sense for sense). The syntax of ancient Greek is very dense and precise. The grammar has many rules and more exceptions, anomalous tenses, intense archaic roots and crazy compound words. Interpreting a small phrase was like deciphering a code and then magically it’s meaning made perfect sense. That process was similar to a “disassembler.” Future projects always include taking lessons of ancient Greek again.

“Disassembler” also raises important questions about how far technology can go in controlling and automating our behaviors. How do you consolidate this wish for a more organic world with the use of more technologically advanced animation methods?

Technology interprets and learns to predict our behaviors, functions and ideas. The word “organic” refers to something that has an organ (tool) that supports a living system but since synthetic organs are becoming available from biological materials, the traditional organic concept is challenged. The technological is the new nature and we are adapting organically. One of my video works in the show, The Wild West, talks about rewilding the American West by reintroducing extinct species from the distant past. It shows interiors of futuristic tech and scientific laboratories. The screen is sometimes superimposed by computer vision programming graphs, guiding the viewer’s vision and referencing machine-learning algorithms. The question is how something can be wild and designed, and how something can be controlled and become wild.

This duality between wild and controlled is eternally present in the art world. It poses the question of how something can be genuine if it is curated. As an artist, how does it feel to be making a piece with a specific audience in mind such as “Disassembler” which was commissioned by Pioneer Works?

I made my first video work (New Horizons) in 2002, without knowing what I was doing. It was wild and it still is the best video I have ever made. Ever since, I am fighting with myself not to control my process, but instead to recreate the feeling, the power and the result of the first creation. It was a genuine instinctive moment, almost mythological. With my practice, I am trying to get out of my comfort zone and take myself somewhere I have never been before. It is also a health exercise or mental workout with interesting ideas against existential anxiety and boredom. Then the work finds its audience, or the audience finds the work.

For your two pieces Darth Vader and I/Eye, what made you chose to use vintage monitors to display your work?

I think of myself as a sculptor who works with film photography and who makes electronic art works. The vintage square monitors have a body or depth as three-dimensional objects; they create a different viewing experience from the high definition flat screens with their liquid surfaces; they use an analogue aspect ratio (4/3), squarer and less widescreen.  In the I/Eye, the monitor becomes the organ which supports the eye, while Darth Vader is a monolith with a head and a body. I am interested in anthropomorphic structures and representations and analogue technology is more humanoid.

Your work brings us to a different time. One that is part of the past but also deeply rooted in the future. Archives and memory are the foundation for teaching us the history of the past. In what ways do you feel like memory comes into play with your work?

During my childhood in Greece, I was only exposed to antiquities. My mother was a teacher of ancient Greek and Latin and we often visited archaeological sites. I was conceived in Delphoi. Sometimes we travelled to European cities and saw Renaissance and Baroque art and architecture. The first time I saw contemporary art was as a History and Art History student in Madrid at the Reina Sofia Museum. Years later, I landed in Silicon Valley which is a science fiction experience. I was in a new planet without any old history, or reference to the past as I understood it. It was marble versus circuits and chips. Always interested in technical things, I discovered techno archeology in an old space exploration center (AMES) and the history of Silicon Valley’s first companies with their early information systems along with other local cultural oddities. The technological memory is still exciting for me, in all forms and mediums, conceptually, historically, as digital information or analogue data and becomes a point of reference. My work is the result of all these experiences, along with the memory of my grandmother’s smell, a Greek refugee from Asia Minor.