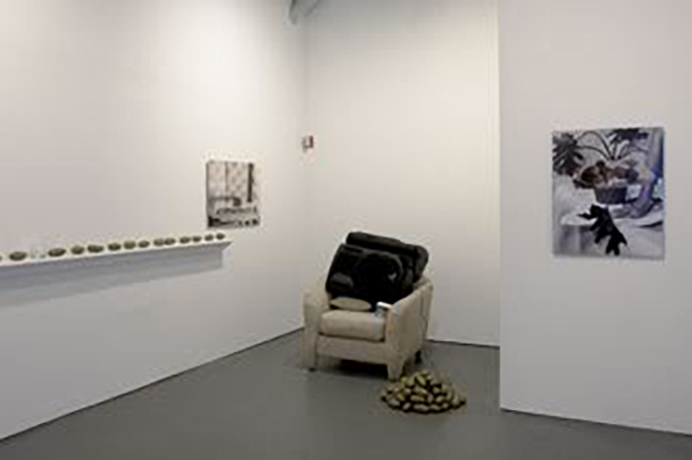 Devon Dikeou: Margaret, how did you come up with/organize the idea for the show, the pairings, the idea of collaborating and reacting to, well potatoes . . . and each other as artists, much less the curatorial combination of artists.

Margaret Lee: The title of the show is actually those 3 icons, camera, potato, cd/music note. When Matthew invited me to do something in a White Room, I drew a complete blank for a few days. I knew that I wanted to use my potatoes again. I had used them in two other installations but neither of those times did I think they were being used the way I thought I wanted them to be used. I originally started making the potatoes as a way of pairing down my practice into something really basic; I wanted to have something almost neutral to use in creating pairs or in coming up with absurd pairings between disparate objects.

With them as my base, I started thinking of artists/works I have seen recently. Michele Abeles and I met in the desert (Joshua Tree) while participating in a HDTS. I first saw her photos there and immediately knew there was some kinship—mostly because she took the kind of photos I would like to take if I had any photography skills—cold, almost dead, unnatural, with little emotion between herself and her subjects. There was a photo of a plant with a hand in front of it which I saw a few months before getting the White Room invitation and it was in recalling that image that I knew I wanted to work with Michele. I really wanted to see my potatoes in her photos (or that photo specifically) but did not want her to take portraits of them as singular artworks. Rather, I wanted them to disappear into the background or be featured in an arrangement of her liking. I wasn’t sure what would come out of this fusion, which I wouldn’t call collaboration. First off, I told Michele that she would have full control of the image and could do as she pleased with the potatoes. With that, we decided to meet in a few weeks/months and see what came about. I then sought out Darren Bader, who I barely knew but felt as though maybe we approached art making in a similar way, or at least looked at art making in a similar way—since I had just gotten into curating and using other artists’ works within my own pieces and Darren, well read his book James Earl Scones and you will understand. We met and talked a bit about the project, though no specifics were exchanged. I again made sure Darren understood that I was not handing him an assignment or asking to collaborate on something, although in the end we did end up collaborating on the chair/speaker/potato sculpture.

Neither Darren nor Michele had any communication during the process. They had never met. I wanted each artist to have a relationship to the potatoes rather than to each other.

DD: How did your thinking as both an artist and organizer influence the other artists and vice versa?

ML: I think Michele, who doesn’t collaborate, had a difficult time with this at first. But she was really familiar with my last curatorial project, “Today and Everyday,” and understood where I was coming from. Though I invited her from a curatorial standpoint, we discussed the show as two artists. She didn’t need to ask me for permission to do anything and I told her to continue making the photos she was in the process of making but try to subtly insert the potatoes into her compositions, without having to make them the focal point. When Michele was done with her photos, I passed them along to Darren. At this point, I still wasn’t sure what the final installation would look like or what Darren would bring to the room, which I think we all felt OK about because of my dual role as curator/artist. There is something about that hybrid that I think makes the wide-open and unknown doable because the show was not curated in a traditional sense; it’s not based around a formal or thematic statement. I wasn’t trying to push artworks into a story that I created before hand. Rather, I wanted the story to unfold while we moved ahead. Also, in working with other artists, especially one like Darren, you know that you can’t force your agenda onto them and their work and how it is organized.

DD: How orchestrated or incidental was the outcome?

ML: I was absolutely devastated when Michele sent me her two first photos. Both of them featured a naked male body part. It’s funny, because although I told Michele that she could do whatever she liked, I never considered that she would use male nudity, mostly because I would never, ever in a million years consider using male nudity since I never include the human figure in my work. I laughed and told her I was having difficulty with them. She understood but asked me to sit with them and also sent me some others. In the end I chose one of the two difficult images. Actually, I chose the more difficult and graphic one. Darren only told me that he wanted to include the song “No One” by Alicia Keys (a song I’d never really liked before). Darren and I met repeatedly, talking about possibilities but we both knew that we wouldn’t really know until the installation started. Part of the project was working with unknown elements, the outcome was supposed to be incidental or at least I wanted the elements to be incidental. My goal was to take these incidentals and pull them together into a really tight installation that looked like a solo show.

DD: Speak about the application icons that appear on the invite, website, press material, as well as alongside the actual images of the show: camera, potato, tunes . . .

ML: I wanted to come up with a title for the project but since it was a non-thematic three-person show, I found myself resistant to coming up with a catchy title.  Recently, I’ve been obsessed with emoticons on my iPhone, these cute little icons that stand in for words. I find myself sending messages like “balloon, wrapped present, champagne glass, cake” to say “Happy Birthday”. So, for this project, I reduced each artist and their included work down to an icon, basically to convey who was bringing what. I liked using this “new” language. It seemed web 2.0 to me, as did the actual project. Not in that we were using technology in any way, but in approaching the project using: interactivity, collaborative authoring, and a move away from individuality, the last of the three points being the most important to me. In reducing an artist and their work into these icons, that could be interchangeable and reused, I felt like it was a nice move away from the idea of the singular artist as genius concept. Also, the title of the show is also an artwork. I made the icons myself and the grouping is now a wall piece in an edition of 10.

DD: We can all imagine from experience what the tune icon implies, as well as that of the camera. What does the potato application do, or what could it potentially do.

ML: It’s funny because there was no other option but to have the potato icon, since that is all I brought to the project. It’s the most absurd of the icons and I like the way it is something very “natural” in between two “technological” implications. The potato icon, nestled in between, also conveyed to me something really human and basic. These potato sculptures connected the works and the artists. It is an unlikely function for them, but a good one!

DD: There are elements of tension between realism and photorealism, as well as a dialogue between constructed space and literal space. These dichotomies are the thrust of several divergent artists whose work seems to be not just influential, but is almost echoed or specifically cited and twisted in the work of all three artists. This range of artists—from Rachel Harrison to Frank Stella, Robert Mapplethorpe, John Miller, and Richard Estes—even Magritte comes to mind in varying degrees. Please speak about your influences, as well as the mark that the mentioned artists might or might not have on your communal strategy as well as the individual strategy of each of artist in the grouping.

ML: This is a hard one for me to answer. I don’t like thinking of the trajectory of art in linear terms anymore. Part of the Web 2.0 mentality that I like or identify with is you are bombarded with images/ideas that you really could not process in a rational, linear sense. You take bits and pieces and they come together in ways that are unexpected. You find yourself looking at say, a Magritte (who, of the artists you list, I think would be the strongest influence), and then find yourself thinking about some funny video you saw on youtube, rather than what came before or after the Magritte in art terms. I could say supermarkets, interior design, Madison Avenue and the museum gift store, influence me just as much or more than artists who have influenced me in the past. But if I were to mention anyone, it would be Louise Lawler.

The communal strategy comes out of a desire to contextualize work again, after years of Art standing as luxury good and galleries showcasing work as such. It’s an attempt of my part not to make or showcase work for the mid-century modern home. The shared authoring of the project stands in complete opposition to artistic genius and curatorial wit.

DD: Onto something a little less, less or more . . . What do you think about ketchup or catsup . . .

And about steak? What do you think your collaborators think of it?

ML: Ah, Darren would LOVE this question. I don’t eat steak but love ketchup, though I’m trying not to eat it since it’s so salty and kills your taste buds for hours. But French fries without ketchup is a sad thought; I’m too American to give it up. [Editor’s note: Jonathan Swift coined the spelling “catsup” in 1730.]

DD: There is a balance between trompe l’oeil and found objects that is both coolly obscuring and hotly obvious in this show. Brillo vs Ballantine Ale, or rather Brillo and Ballantine Ale vs Hans Haacke.

ML: THANKS! I want the Brillo and Ballantine Ale. I’m hoping that we are moving in a direction when artists realized the limitations of making “political” art and see that the politics are actually in your movements and actions. I just don’t see the point of making political art and showing it in a commercial gallery nor do I think I am making political art at all. It’s never my intention. I don’t want to comment on institutionalism, I want to move away from it, without strong rhetoric. It’s not so complicated for me. I want art to live in a space and feel alive for the duration of the exhibition.

DD: Where do potatoes and you go from here?

ML: Hmmm, dunno really. Potatoes may be retired for a bit. From now until the end of May, most of my energy will go into trying to keep 179 Canal going. I think I will try to practice playing the piano and work on my cake decorating skills.

More info on Margaret’s non-profit space 179 Canal can be found at http://www.179canal.com.