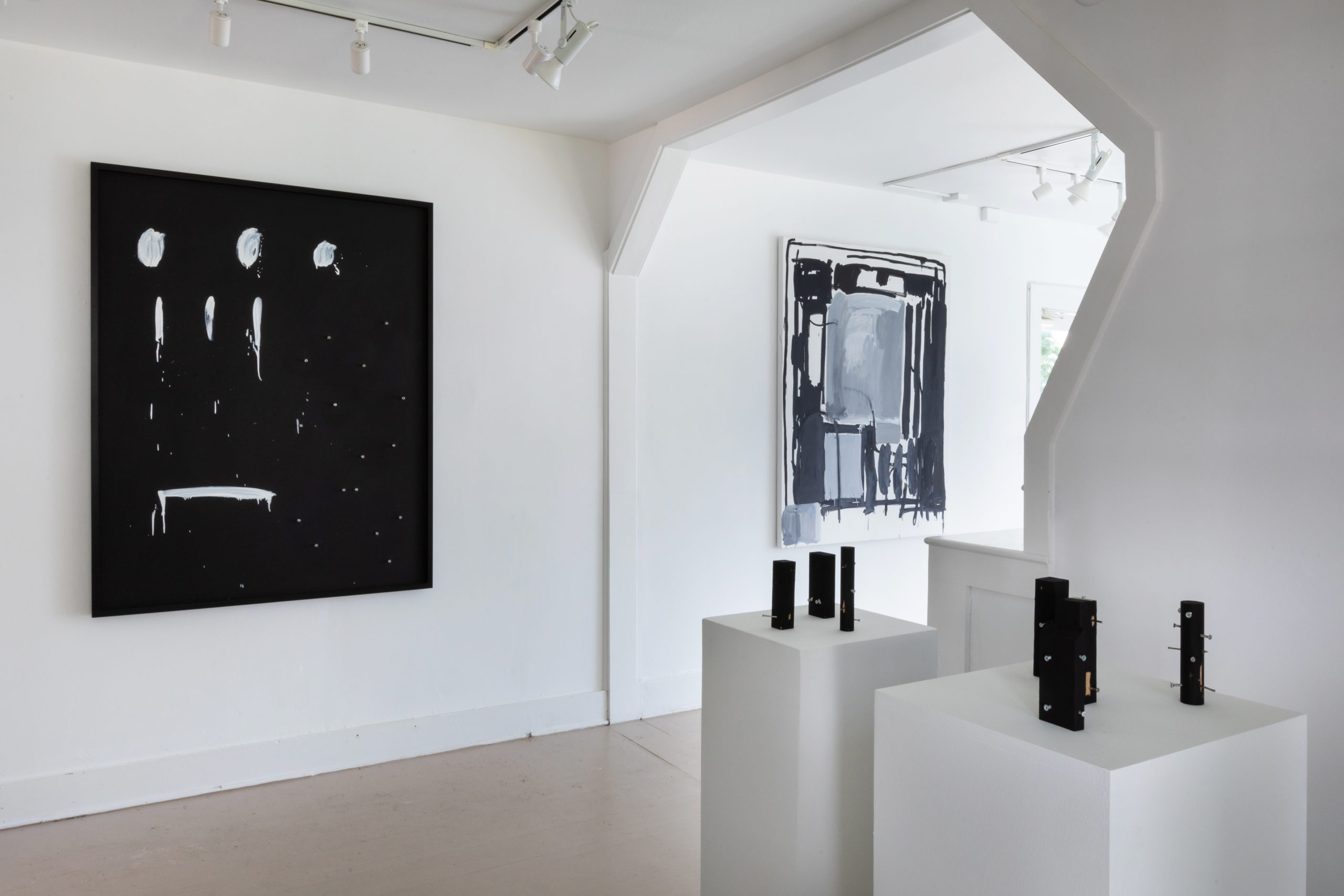 The title of your show “Summer Discutio” seems to open up conversation—root of discutio is discussion, but “discutio” also finds itself akin to shattered, strike down, dissipate which are the opposite of discussion. Could you talk about how the title and the word discutio effects and affects the reading and making of this recent body of work.

I came across “discutio” while reading an older text, although funnily can’t remember where specifically. While prepping for this show, I found a note in an older sketchbook where I had written the word very large and circled it, which meant I should look into the meaning. And yes, while looking into the etymology, I saw this contradiction which confirmed my wanting to make my new work with this contradiction in mind. My move towards abstraction was spurred on by wanting to sit with contradictions or seemingly oppositional forces. Very simply starting with black and white, 2D and 3D not through a “verses” lens but a relational lens or a reciprocal relation.

There is a very pared down palette and material use in the four paintings and four sculpture groupings, black, white, silver, gray (paintings) and wood scraps, nails, and screws (sculptures). No jars or loose change, disbanded rubber bands—that junk drawer described in the press release is curated and edited to a minimal amount of variants . . . Please elucidate on these decisions.

The process of narrowing down my choices is generally how I get to making a new body of work. I’ve never been drawn to the “everything is possible” fantasy but do think if consideration and care are applied to the given parameters and context, most things are possible. Conditions are always changing and so things in the past might not apply to today, so before I start working I take an assessment. Looking through my jumble jars/drawers is a simple, highly controlled, low-stakes mental exercise in assessment. Rather than tossing the whole lot out at once or using it all at once, I dump it out and see if things start to click with the ideas I’m mulling over. In this case, it started with scrap wood. The off-cuts were already all the same size creating an instant grouping without me having to decide scale. The uniformity of those pieces of wood informed my decision to stay rigid in my pallet and material use. It is always a relief when the materials give directions so clearly. 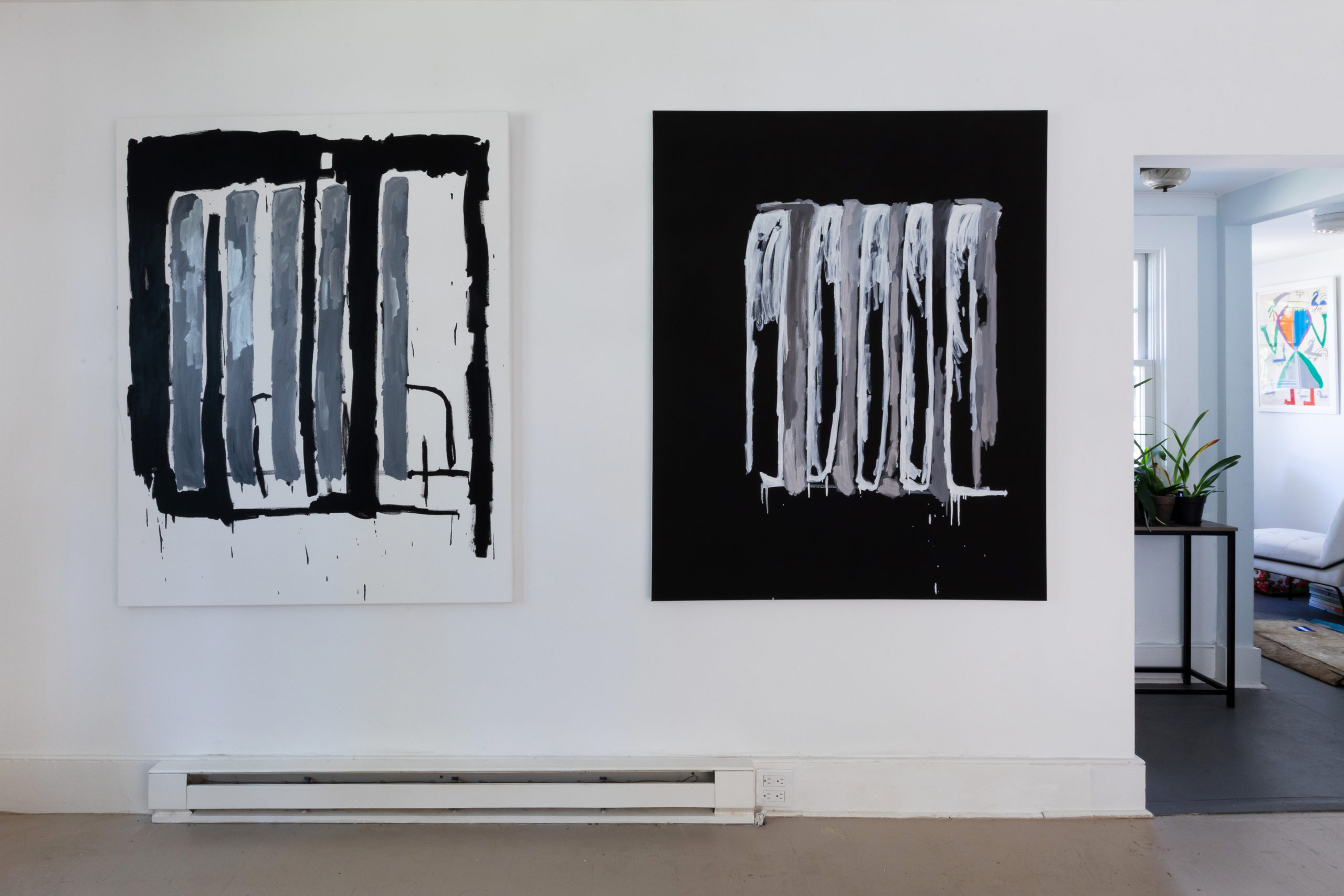 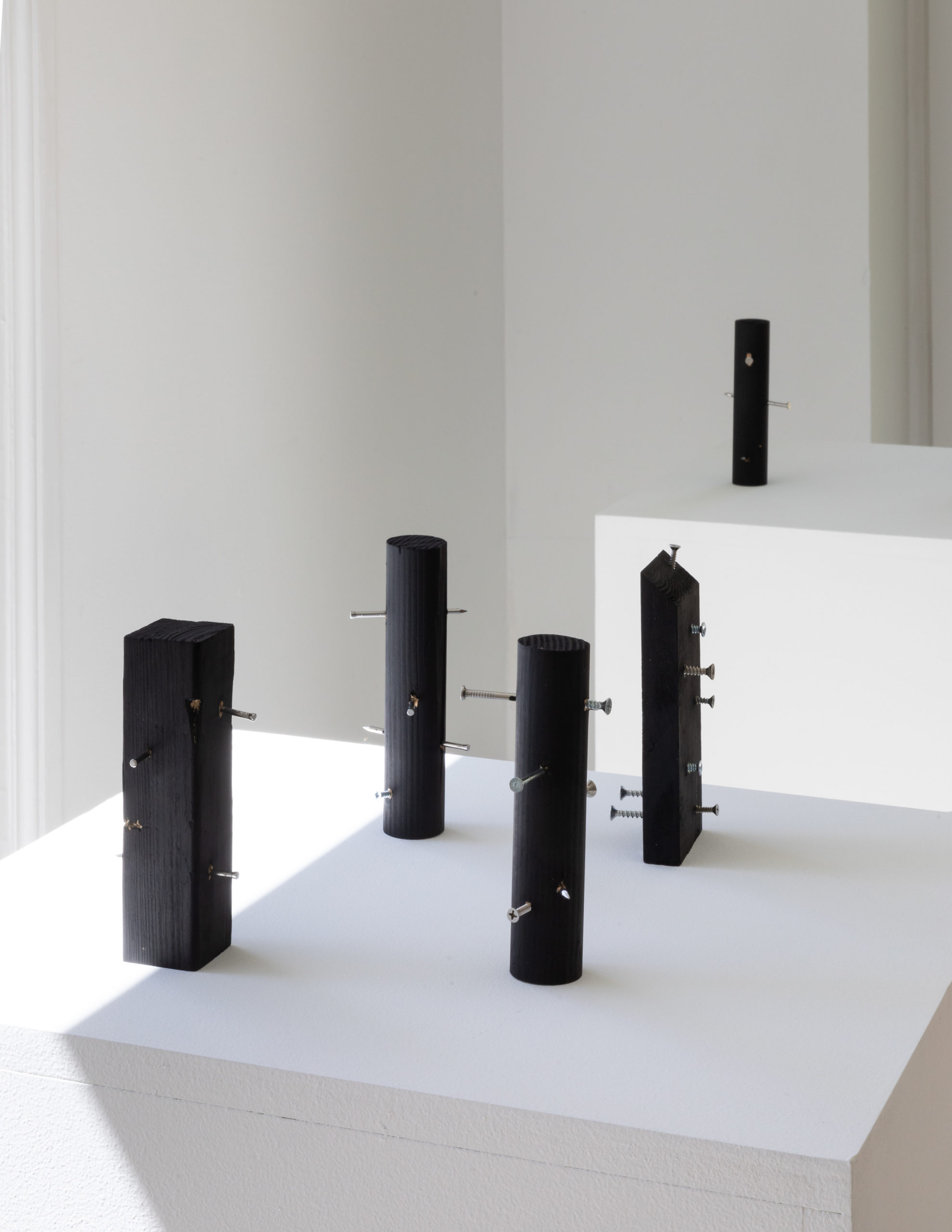 Previous bodies of your work take on/cite artistic movements, trends, practices as varied as the Pictures Generation, Surrealism, outright trompe l’ouille, even collage. The work in “Summer Discutio” is more staid . . . I feel like it’s channeling some era, a summer era oft thought of in terms of the Hamptons, as so many ab ex or action painters called the Hamptons their studio/home. Did locale have any influence on the work exhibited . . .

It’s hard for me to separate the location from its history and from its present form and I have mixed feelings on both, as I’ve had mixed feelings about all the other movements/trends I’ve cited previously. There is so much romanticism around painting and especially painters who have left the city. That narrative often ignores or erases previous histories as well as privileges the singular genius mythology. When given the opportunity to exhibit my work in a very specific context that perhaps I’m not 100% comfortable existing within, the process of conceptualizing, honing down ideas and the actual making of the work helps. I don’t feel the need to make that extremely personal process explicitly legible within the works themselves but hopefully materiality, form, palette and repetition come together to convey not resolution but an expanded inquiry, which I hope continues indefinitely. 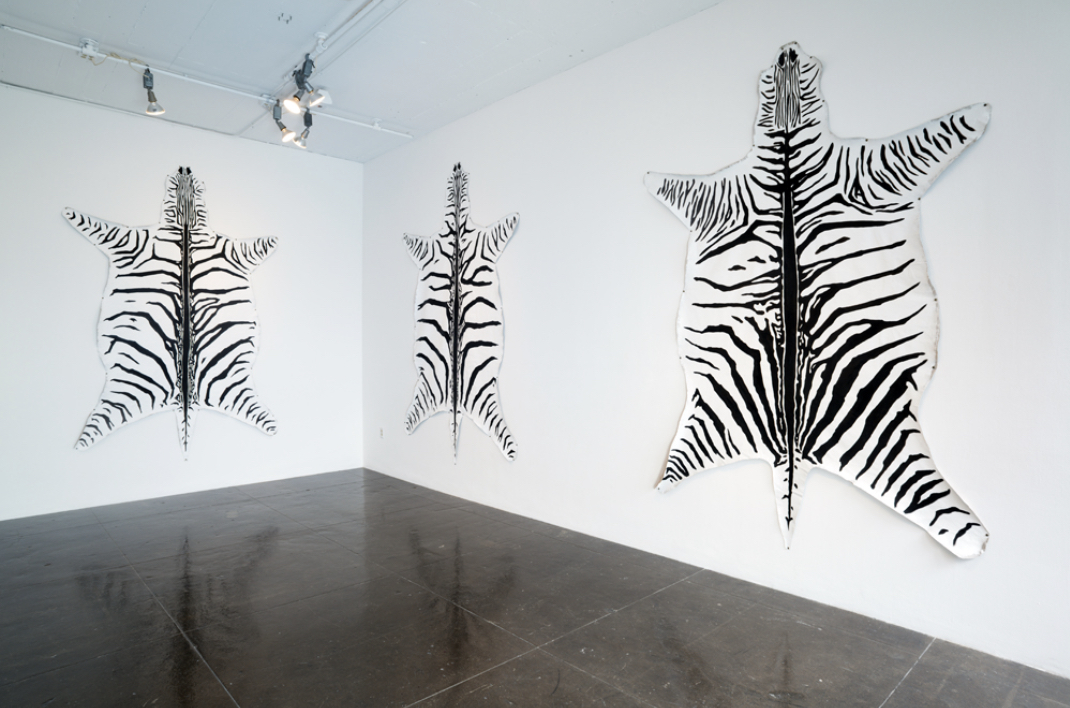 So this idea of context in terms of studio practice and exhibition is of a personal nature, but there is some discussion/discutio that happens naturally between conception/execution and conception/exhibition . . . what about context when a work or body of work is collected. There an artist has no idea in what context their work will be exhibited or seen, or equally importantly, in the reading of their exhibition history present, past, and future. It’s an uncontrollable known, or maybe a controllable unknown. How does the work in “Summer Discutio“ relate to say specifically, the series in the Dikeou Collection, Zebra (Huh, What) 2009-12 . . .”

Those Zebra “paintings” are works I have consistently returned to as I make stretched paintings on canvas. I think when I made those works, I was trying to set certain parameters for how my work would be contextualized and what type of conversation the works would elicit. I wanted to question value and how it is created and the role of reproduction and authenticity within that process. The zebra acted as a ruse that allowed me to work with black and white paint without having to commit to or be placed within a Painting dialogue that I did not necessarily belong or wanted to be placed. Ten years later, I still committed to working with a limited and stark palate and less concerned with controlling context. Resigned and accepting discussion does not always result in understanding and consensus. 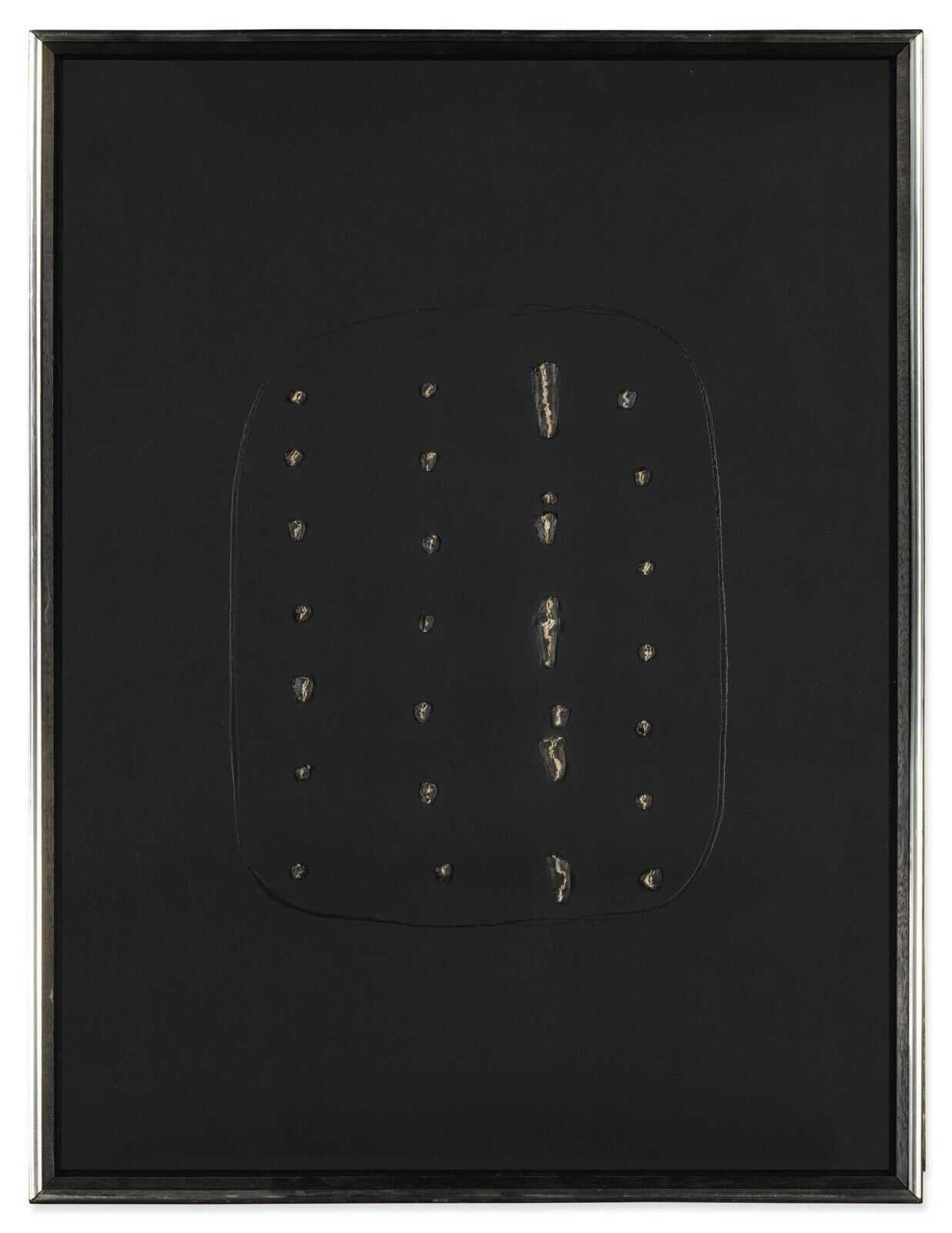 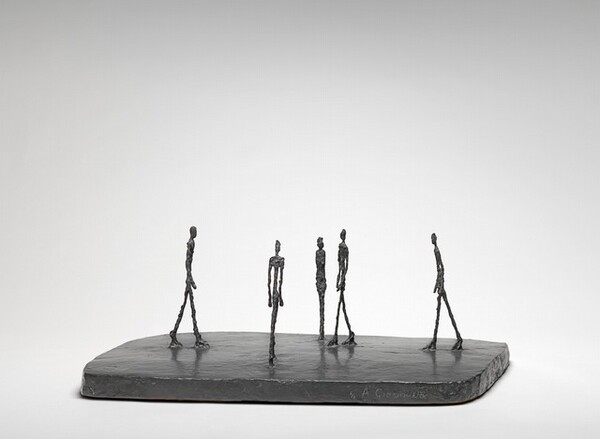 Pedestals, well they aren’t really that are they, plinths would be more accurate. How do these plinths interface with the work . . . of “Summer Discutio”. A perfect exhibition structure to present the imperfect . . . I kinda want to see one of those nails break the plane of the surface of the plinth that presents it . . . The same goes for the white cube gallery, which seems to be a cottage, and has cottage like cut out walls that follow the pitch of the house rather than the scrutiny of the white cube . . . And one of the wall hangings is referred to as sculpture . . . Very “Working Space”/Frank Stella-ish . . . Oh and Fontana . . . Screws certainly pierce the picture plane there . . . Thoughts . . .

I wasn’t able to do a site visit to the space before making these works but once they sent me a floor plan and photos, I realized the space felt somewhat divided in two, rather than a traditional white cube. This probably led me to wanting to include pedestal works to help balance the proportions between wall space and floor space. Whether or not I was successful, my intention was to seamlessly transition from the 2D painting surface to the surface of the sculptures. The paintings sit on white walls so I wanted the small sculptures to sit on an equivalent, which to me meant white pedestals. I definitely was thinking about piercing the plane, which was more easily achieved via sculpture than painting. I’ve been thinking about holes, punctures and the objects that get placed in said holes or do the puncturing for a few years now. I guess I’m still thinking.

Numbers . . . Three and four . . . Do they have any significance . . . In “Summer Discutio” . . . The groupings of both paintings and sculptures literally are in groups of three or four, often the compositions themselves in the paintings and sculptures favor groupings of three or four . . . I think I even count three or four windows . . . It speaks certainly of rhythm and balance, sometimes symmetry . . . Sometimes asymmetry. Are these threes and fours lonely soldiers or walking Congress in palazzos . . . Discussing or Discutio . . .

When I number my works, I think it’s in the mindset of getting one foot in front of the other, slow and steady, one step at a time, don’t get ahead of yourself. In my earlier work, I could set myself a task of making a plaster form look exactly like a watermelon. It was very obvious when the work was done and if the transformation was successful. With abstraction, it’s such a battle knowing what I’m trying to achieve and also knowing if I’ve arrived at the place I think I was trying to get to. Start with #1 and seeing how far it goes allows me to work without setting an overly ambitious agenda or thinking in grand epic proportions. But also, yes in regard to being in relation to the windows, I try not to fight against the space where I’m to exhibit new work but to allow the space to inform my decisions. And yes also to this idea that the works are talking or in discussion with one another, especially the sculptures. There is an internal dialogue between all the objects in the space, with each other and with the environment. It would be impossible for me to transcribe into words all the back and forth that is going on but also maybe that’s not the point.