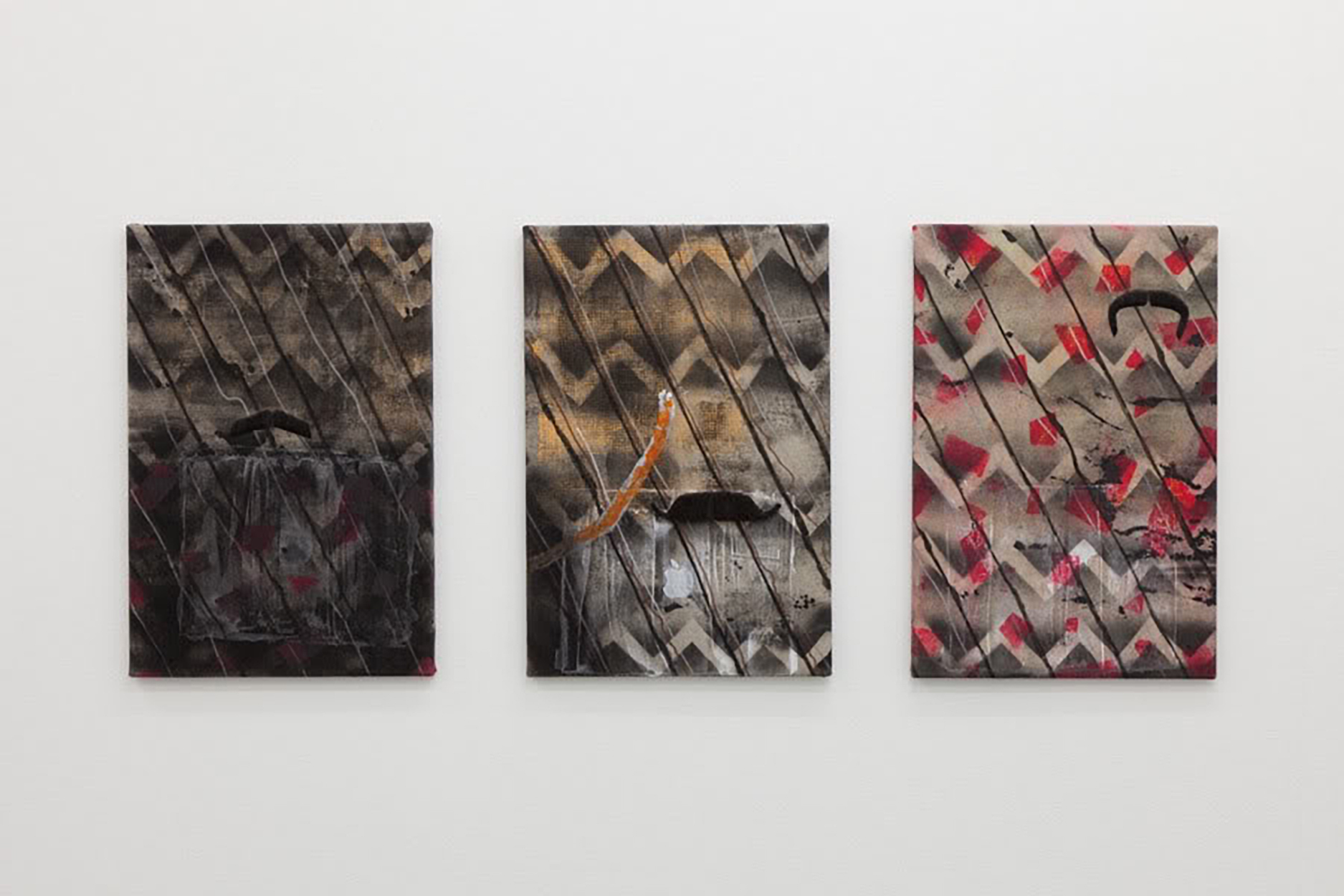 Lucky DeBellevue is a Louisiana-born, New York-based artist most well known for his voluminous yet delicate, textured sculptures made of colored chenille stems (aka pipe-cleaners). Lucky has exhibited widely, including many one-person shows—most recently at John Tevis Gallery in Paris. Lately, Lucky has been focused on 2-D work, such as his collaboration with John Armleder for DISPATCH.

We just published a project of yours titled Collaboration in the new issue of zing, #22. It’s one of the most printophilic projects of the bunch—xerox, collage, black-and-white, hand-cut, typewritten—all the qualities of a low-budget ‘zine. Do you have a history of ‘zine-making or is this your first go in the aesthetic?

I definitely wanted to reference zine making, but it was my first actual go at it. However, I have been planning to make a zine named “Choicez” for many, many years. I always had the cover mapped out in my mind, a sad hand-drawn font, a photo of a woman with a pitchfork I found in a book entitled “Weavings you can Wear”, but I never got around to actually making it. Now we live in a world of blogs, maybe I will finally make it that way, but I love zines, so maybe both? Probably never happen.

As you say in your curator’s note, the project involves a reinterpretation of documents from a scrapbook made by women prisoners convicted for murder in the South. You mix in images of your own work with newspaper articles letters, and forms to create a “forced collaboration.” Do you feel that there is a degree of affiliation with your work and the documents from the prisoners’ scrapbook or is it a more happenstance juxtaposition?

A little of both. I wanted it to be kind of absurd. After all, this was a record of these peoples’ lives in this amazing scrapbook, and I was being kind of a vampire, just plopping my work on top of it. So there is a bit of subtext about how one’s life can be used for someone else’s purposes, bringing attention to themselves by association. I also identify somewhat with their marginalized status. What could be more outsider than being a lesbian cop killer in the South in the 1970s? I still want to believe somewhat in the outdated romantic idea of the artist as outsider, so that is part of it too.

Your work, Otter, was recently installed at the Dikeou Collection in Denver. It is a large, teepee-esque sculpture made of your signature material, chenille stems. What first attracted you to this material and why have you continued to use it?

At first, I thought it was a kind of dumb joke. I was at a point when I wanted to clear my head and start from zero as far as my practice. I was thinking of the pop artists and how Lichtenstein drew from comic strips as a platform to explore other things. So I went with something that was very basic and memorable to me as a child, something I assume others had used in their arts and crafts classes as children or had some kind of experience with.

I don’t use chenille stems exclusively as a medium anymore. In the last few years my process has opened up to include other mediums. I still make some work with them, and use them in printing methods, but it isn’t quite as central to what I make as it once was.

You explained to us previously that otter was gay slang—something along the lines of bear. How does the title relate to the piece?  Is sexual identity important to your work on the whole?

Originally this piece was in a show at the Whitney Philip Morris, and the titles of the works in the context of that show were important. But usually my work is untitled. I was interested in what goes on underneath the facade of appearances. The setting of the show was a public space attached to a corporate office, and I wanted the titles to reflect either the machinations of power through alluding to historical figures who grasped for it, or by using coded references that categorize interests within a particular community. So in this exhibition the titles functioned as objects kind of hiding in plain sight.

I was going for the trope of a sub-set within a set, and Otter refers to a kind of body type in the gay bear community, not the hairy/stocky/chubby/football player build that many of the bears fetishize, but a thinner body type that is either hairy and/or is self identified as being part of that community. Anyway, this sculpture entitled Otter is phallic-like, fuzzy, and becomes thinner as it rises in space. I wanted there to be some humor in the title, and the color gets hotter as it rises. While I think we should own what we are, I’m not so into being reductive about it. So usually I want titles to be more suggestive if there is one. I like that quote by Kierkegaard: “To define me is to negate me.”

In your artist statement, you say you consider Otter sort of as a drawing in 3-D due to its linear quality and gradations of color. Is this your approach to sculpture—through lines?

Mostly I was just thinking of using materials I hadn’t used before, just exploring. Initially I wanted to create a “thing” in the most economical way, so most of the earlier works were more minimalist, then became progressively more layered as my interests evolved. Part of it was a decision to make objects that were more porous and textured, not just flat massive surfaces that signified strength and stability.

What’s on your horizon?

In December I am in an exhibition entitled “December” curated by Howie Chen at Mitchell-Innes & Nash Gallery in New York. The artists in the exhibition runs the gamut from me, to Jean Dubuffet, to David Hammons, so I am looking forward to seeing what kind of dialogue is created with all of the different artists in the show.