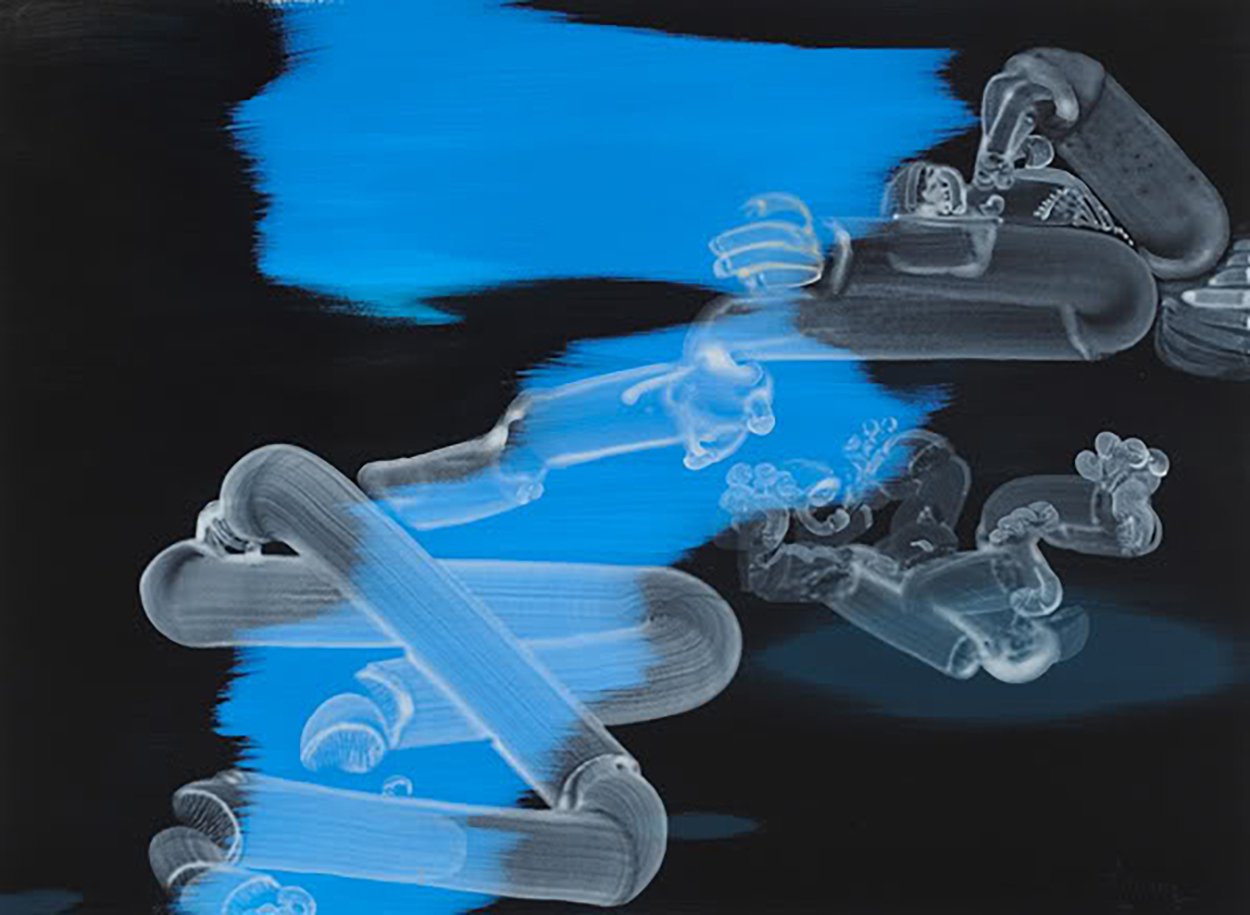 Juan Gomez is a New York-based painter and long-time friend of zingmagazine. He stopped by the office yesterday to discuss his upcoming solo show at Charlie Horse Gallery in Williamsburg, Brooklyn, which opens this Thursday, Oct. 28 and runs through Nov 13. Here’s what he had to say . . .

Brandon Johnson:  I came to your work through zingmagazine, when I first started here. Issue #21 featured a project by you tilted “Rhythm,” which was a series of watercolors.

B: And then later I saw your work at the Dikeou Collection in Denver, an earlier series of drawings, which was also featured in zingmagazine, issue #10. These were line drawings, similar subject as the project in issue #21. But I would say a little less expressive, they’re subtler. Now you have work coming up at a show in Williamsburg at Charlie Horse Gallery, and I just had a chance to look at these. They’re definitely different than you previous work, or at least your work in zingmagazine, but at the same time not so far off. How would you say you came to working in this way?

J: I’ve always done two things: abstractions and figurative work. When my first project with zing, with Devon, came out I was just starting to show. And that’s what I was showing—abstractions. That’s all I was really pushing out, was the abstract paintings. At the time, I knew Devon was running zingmagazine, and I had an appointment and I thought maybe I would bring her something more graphic friendly because my paintings at the time were black on black abstractions . . .

Juan: It was something that was kind of difficult to translate. And they’re large. Not just black on black and abstract, but they rely on size to give you a physical effect, the textures and everything else. The opposite of something you would want to attempt to reproduce in print. So, I thought maybe I’ll bring photographs of other work. I’ve always had this way of working. I always draw a lot. But back then I didn’t consider them to be a part of any body of work or related to anything particular of interest. I thought maybe they would be good to bring along, as a back up plan.

B: So it was a bit of a leap to publish them in a magazine with international circulation . . .

J: At first I was afraid she was going to react strongly to the sexual content.

J: Graphic, violent, sexual, in a way. So I told her, she was there with Geraldine [Postel], I told her before I showed the slides that they might be a little . . .

J: I don’t know how you feel about, but let’s see how it goes. It’s sexual and this and that. And she said “Yeah, sure. Go for it. Let’s see it.” I was surprised by how she reacted to it. She was very receptive.

B: Obviously she liked them well enough to acquire them for the Dikeou Collection, which was probably pretty amazing for you.

J: Yeah, that was a double-whammy.

B: You’re in a collection, in a magazine, with something you never really thought you would show. So, for issue #21 you were doing watercolors, similar, I would say, to the first series, “Share” in issue #10.

J: Those had more aesthetic elements than “Share”. “Share” was more straight pen or pencil, charcoal on paper like taking notes. The second series, “Rhythm” was composed of watercolors, in color, and in that way was a little different in that I put more attention into what they said to me.

B: Now looking at your newest work, I see a progression of how “Share” was just line drawing, black and white, then with “Rhythm” there’s the watercolor, but with a limited palette, still between line and color. Now you’re using strong background colors, bringing it to the forefront. Could you comment on how you came to this?

J: For this show the pieces are more integrated in terms of the abstract and figurative parts. Each piece has a balance between the two. One is just as important as the other. If you go back to the first project I did with zingmagazine, it was all about the figure. Very literal. The second one is less literal. There’s still no background, just atmospheric color tones. In these, the background fights for the foreground and the figure recedes or comes forward depending on which on it is. I’m very excited about them.

B: Yeah, definitely. I would only really recognize the figure just from my experience with your previous work, as opposed to others who would walk up to the painting with no context.

J: For some people it would just be abstraction. The figure would not be present.

B: Exactly. Some show more figure than others, but you could definitely read any of them as abstract painting. That’s one quality I liked when I saw these images in a preliminary sort of way. So this is bringing abstraction back into the fold, especially in this series of figuration. This is an interesting progression. And “progression” was a word that I was thinking of in considering these three series. But going back to the beginning, what was this impetus to use this erotic subject matter for these drawings and paintings. You said your main way of working was abstraction, but also had this going on. Is there a story behind this?

B: You were in your studio, drawing, and it expanded out into something bigger.

J: I usually have a very systematic way of loosening up to get into a painting. Because the paintings, I never plan them. I just go onto the canvas and come up with a painting. But before I had to channel my energy with some kind of structure to get started. They became sexual. They were charged. I tapped into something that I had never explored, just opened a door and it became fluent.

B: The figure has always been a classic form for a painter. This work inherits the figure as form, because you are really stretching the figure, modifying it and bending it and it is all very obvious when you’re doing it. You can look at the painting or drawing and it clear that you’re distorting the figure to explore ways of using the medium, the brushstrokes and textures of the paintings. The title of your project in #21, “Rhythm” gives a good sense of that. There is definitely flow, a rhythm to your work.

B: Yeah, they seem like variations on a theme. There are lines, the limbs are very thin, curving and bending around the picture. You also take that into the new set of paintings. The figures boil down to these sets of lines in a similar way, but are more detached now.

J: They’re a language. They are intuitive and subconscious in a way. I try to let them be themselves. But they also became . . . when you write, you can write but a certain way. The way you write is just the way you write. So, the work does have that look of using certain formal structures.

B: Having just gotten back from Buenos Aires, my first time in South America, I wanted to discuss your Colombian background.

B: And you came for school?

J: Yeah, as a student. I had a student visa. Sort of a runaway from home kind of thing. Actually I had been out of my house for a while already and I had a chance to take the leap here.

B: Would you say coming from Colombia has influenced your work in any noticeable way?

J: I don’t make many conscious decisions about influence in my work. I’m not very thematic or intellectual or conceptual.

B: Would you say maybe as a cultural product . . .

J: I hope it comes though, filters out into the artwork and somebody would say, “Oh yeah this guy might be Colombian.” Latin America has a lot of richness. It’s something I’ve been into lately. Latin America absorbs elements. For example, Colombia is not one unified group of people. It’s very regional, so it depends if the people are more Spanish, Indian native, Black. Even America is like this. Everything is allowed in, in a way. It is not a very selective cultural environment. Let’s say you go to France. They have a very strong cultural heritage and they hold it very dear, which shapes their cultural identity. Latin America is open to different things. They make it their own and then it comes out as something unique.

B: Yeah, I went to MALBA while I was there and really enjoyed the work by Argentine artists on view, which I haven’t had much exposure to previously.

J: It would be good to see more representation by Latin American artists in New York.

B: I agree, especially in the museums. Let’s discuss the show coming up a little more. I wanted to flesh this out before we finish. It’s coming up, happening now at Charlie Horse Gallery in Williamsburg. How did you get involved with Charlie Horse?

J: A friend, Catherine Ahearn. She’s a young painter friend of mine. We’ve known each other for a while. Just recently, in June, she opened a project space and a gallery [Charlie Horse] and she asked me if I wanted to put up a show and give her some pieces for a group show, which was up in July. After that she said she was thinking about giving the gallery a one-year run and said if I was interested in having a solo show, she would put it up. So, that’s how it came about.

B: Was the work selected for the show things you were working on anyway, or did you make this work for the show?

J: I’ve shown there before. At Momenta and Pierogi. I like the scene there because it doesn’t have that institutional feel. There are entrepreneurial artists starting spaces. But it’s on more of an eye-to-eye level. Less commercial, institutional. I’ve always liked that idea and I’ve always seen good shows there. I knew people there before the galleries started popping up, too.

B: Anything in particular you wanted to discuss about your show? I mean, from what I’ve seen it looks like it’s going to be a good one.

J: I feel great about it! I have a good feeling about where I’m at right now in terms of painting.

B: Thanks for the time, Juan. Can’t wait to see it installed!