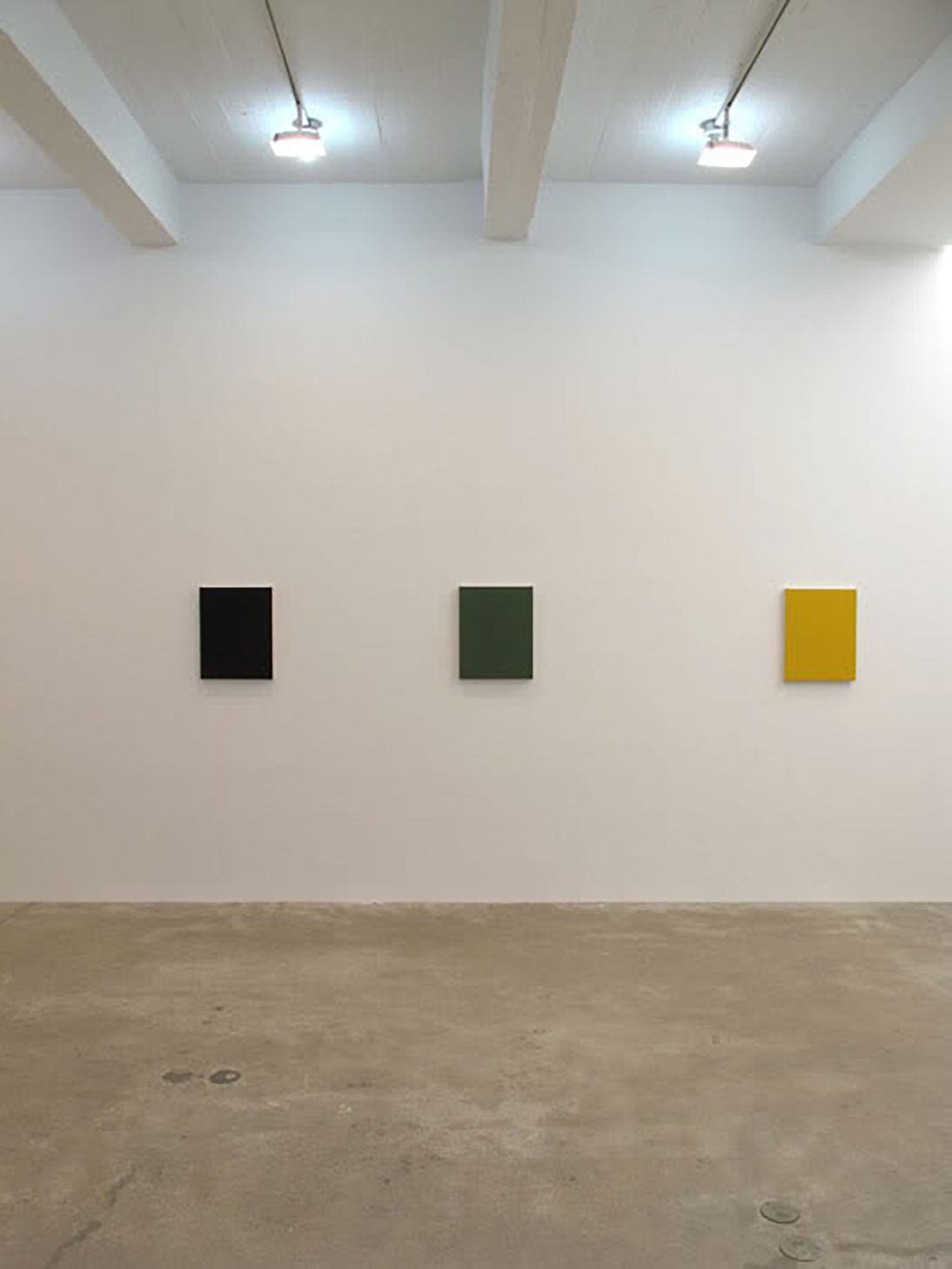 “Untitled (Speakers)” at the Dikeou Collection is one of the first pieces Brooklyn-based artist Joshua Smith showed in a gallery setting. The sculpture, a stack of custom-made speakers gifted by his grandfather, croons Ray Orbison’s “Only the Lonely” and nudges playfully at the selfishness of artists and a melodramatic need to be loved. Though Smith has abandoned sculpture for painting, he continues to analyze and critique the artistic persona with his work. We met for an interesting discussion at Shoot the Lobster in New York City where a show of his recent monochromatic panels was on display.

What are some recurrent ideas in your body of work?

I don’t know . . . love, longing, discomfort, being-lost, hope, elation, lust, sickness, shame, soda, terror, pizza, cats, dogs, death, Printer-Registration-Errors, The Tyranny of Context . . . all of the big issues. And the small ones too. I used to try to illustrate different feelings, trying to depict what it felt like to be a person, to move amongst a network of feelings and things to think about, but I stopped that because I’ve realized that all of the feelings and the things are already always in the air, or just bubbling in the background of our minds, and that abstraction can actually summon these things and feelings, one by one to the surface, they can reveal themselves. To try to illustrate what everyone already knows or feels is pointless when we’ll all just continue knowing and feeling it either way.

You’ve been producing monochromes for an extended period. What continues to draw you to them?

I actually like the paintings, myself. I enjoy looking at them. I am not nearly as orderly and contained personally as the paintings are, so they really feel outside of me. Left to my own devices I would just make a bunch of garbage but for me this body of work really demands some isolation and commitment, so I’m going to honor that. And the works are really meaningless unto themselves, so I’m able to step back and look at them, myself, as part of the audience. It’s nice to wonder what makes some of them successful and others failures.

You said that the works themselves are meaningless. How has this affected your development as an artist?

I don’t have ownership of what the works might mean, or over how they are to be interpreted. All of that is very personal, and in that sense I of course have a massive attachment to the works for personal reasons, but how I see them, what I think they mean, that’s mine and I don’t think it’s right or correct to try and force that on anyone else. The point is that Red and Blue don’t mean anything concrete. Either does Painting, Sculpture, Performance, so forth.

What personal resonance does this sort of “ahistory” carry considering you don’t come from an art historical background?

The press release for the my most recent show mentions that there isn’t such a thing as “ahistory”, which is to say that of course these paintings are from a specific place and time, and that they are informed by the history that precedes them. But I thought it was necessary to say that, in light of my hopes that viewers not necessarily feel the burden of knowing art history or the history of monochrome painting before seeing the show. Of course I can’t shake off certain histories personally, but the point is that there isn’t one correct history within which to place the paintings. The point is that the paintings aren’t jokes or lamentations about the history of painting, and that there’s nothing to “get”. I just want viewers to place the works within their own histories. Which really goes without saying. They’ll do that anyways.

You mentioned that you think artists should strengthen their attachment to practice. Can you describe any experiences that influenced your adoption of this view and elaborate on what exactly you mean?

I’ve definitely read some very suspect press releases, that are then copied and pasted into very suspect reviews and articles, so I think most artists specifically don’t share enough attachment to their practice. I think that they often ascribe their own interpretations of what they do with far too much authority, and I think it’s shocking how many people in the cycle are willing to repeat whatever artists say of themselves and their work. Every artist will tell you that they’re ushering in the revolution. Almost none of them are, right?