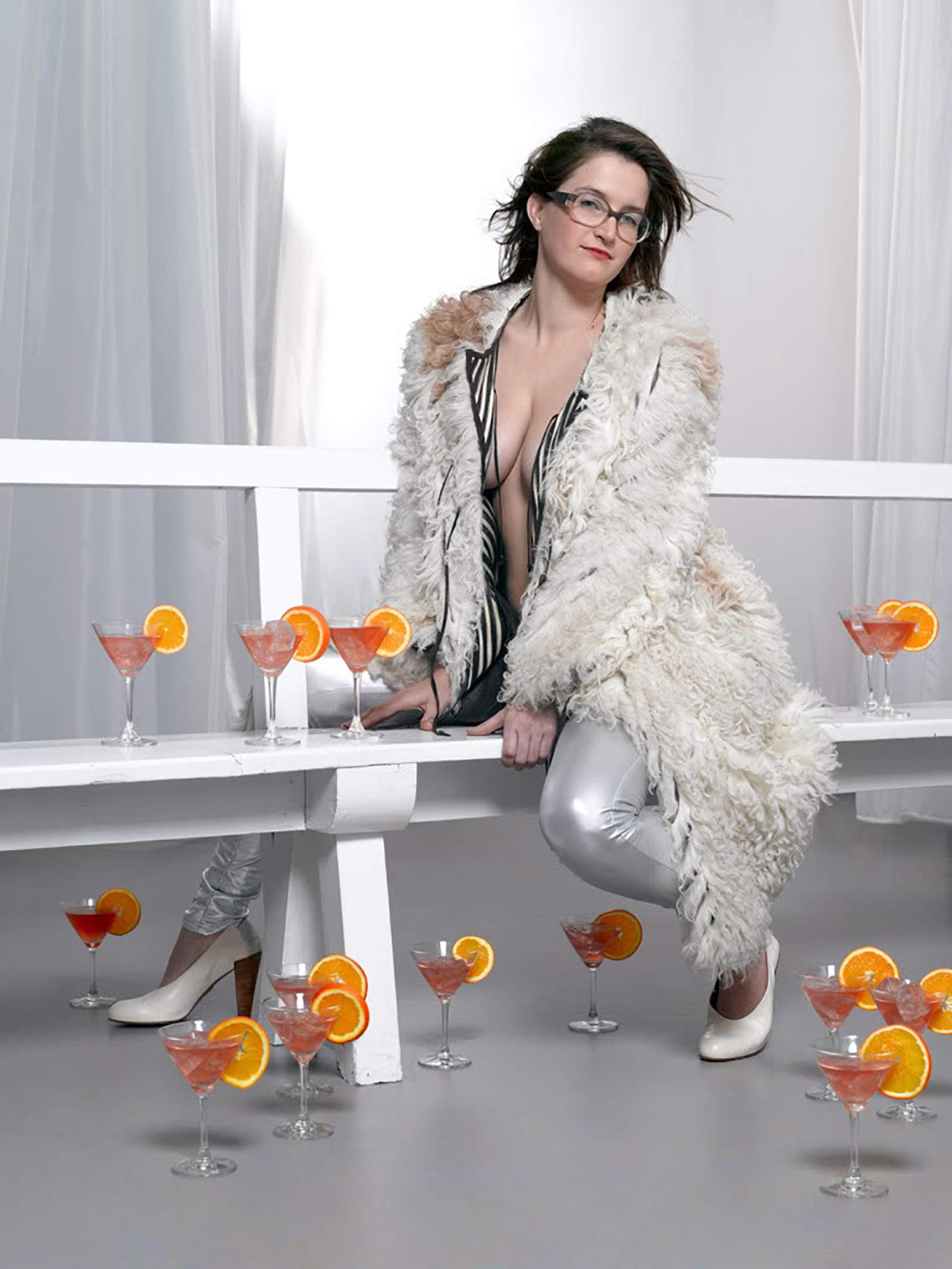 Some time back photographer Jeronimus van Pelt contacted us about a project he was doing with welfare artist Daan Samson featuring women working in the artworld framed within a sexualized context. The photographic series features eight female curators, theorists, artists, critics, museum directors, and others who agreed to participate, working with stylist Margreeth Olsthoorn to stage the scenes. “Art Babes” debuts today as part of Torch Gallery’s booth at Art Rotterdam 2011.

How did your collaboration come about?

Jeronimus van Pelt: A few years ago, I visited Daan Samson’s exhibition entitled “Showing One’s Colours” in TENT, the Rotterdam art centre. Almost excusing my enthusiasm, I mailed him that his work made me feel cheerful. I felt a kind of ‘direction’ in his otherwise unsettling art projects. The self-proclaimed art celebrity turned out to be surprisingly simple to approach. Almost immediately he was prepared to make an appointment in a museum in my hometown of The Hague. In the museum restaurant we ate cheese croquets with toast.

Daan Samson: There, in that restaurant, I met a photographer with an artist’s soul. Jeronimus showed me portraits of top civil servants, patricians, close friends and ministers. His shots were all characterized by splendid, sophisticated lighting. He talked comprehensively about the way in which, during his shoots, he establishes contact with the personalities in front of his camera. His stories and photos do indeed show that he manages to ‘disarm’ people.

Jeronimus: After a while, Daan raised the concept of the Art Babes. He invited me to collaborate on a photographic series within which we would give professional artistic women the opportunity to immortalize themselves as ‘sexy creatures’.

How exactly did you select your subjects?

Daan: What followed was an extensive search through the realms of emancipated art fields. We approached attractive artistic women at vernissages and art receptions. We sought models in all layers of our domain. I looked not only for artists and influential exhibition-makers, but also for vital art restorers, reviewers, and even cloakroom girls in museums. Websites such as Facebook are also very suitable channels to check photos and backgrounds. Correspondence with the potential Babes was often followed by a meeting with the artistic women in question. We spoke about sexuality, liberation, looks and lingerie.

Jeronimus: Daan regularly sent me profiles of artistic women who had agreed to give a glimpse of their most sexy side. After that I, too, sought contact with the Art Babes. Within this kind of photo project, it is important that the model and the photographer manage to get on the same wavelength before the photo shoot. I wanted to hear the voices of all the participants, in order to gauge the way in which they approached the theme.

Daan: Jeronimus is a person who relies on emotions. During the project I observed that he wished to reach some sort of communal trance. For example, in the preparatory discussions he tests the degree to which a kind of energy could be released during the shoots. During those discussions, he promotes a situation that structures this eventual trance.

Did you have to approach many women to find participants, or were your candidates generally open to the idea?

Daan: We live in confusing times. Concepts such as ‘conservative’ and ‘progressive’ seem to have become unstuck. As a result, the self-image that women have has also undergone a paradigm shift. Therefore it was not very difficult to find participants. To the Art Babes, our request probably just came at the right moment. Often the artistic girls had to admit, albeit coyly, that they found it quite flattering to be seen purely and simply as a sexy chick. Other women indicated that they were furious after reading the very first e-mail. Nevertheless, they too wished to participate, even if it was only to come to terms, once and for all, with the feminism of their youth.

Jeronimus: The Art Babe concept gives provocative commentary on our times. To me personally, it was not a goal to supply a specific male view of the concepts of sexuality and beauty. I often spoke with the models about a kind of softness that we could reveal. This softness has little to do with eroticism, it is more about a sort of energy—the softness of female energy. Recently I read an interview with the singer Antony Hegarty and I was rather impressed. I would like to explore with him, in a photographic context, what he calls the ‘softness of the cross-gender principle’. It is not clear whether Leonardo da Vinci painted the Mona Lisa with the aid of a male or female model. I experience a deep source of inspiration in this idea.

Daan: Nevertheless, the Art Babe photo series has a certain macho character. We show influential artistic women within the context of sexist role models. And it is fine that present-day women apparently have the spirit to display some of those traits now and again.

Jeronimus: Sexual clichés versus ‘lipstick feminism’ . . . it is a curious and interesting mix of impossibilities.

Is this a reaction to what can sometimes be a dogmatic intellectual insistence on political correctness, especially in the world of contemporary art?

Daan: Yes, I believe so. The masks can be dropped now, even within the world of the arts. The concept of ‘shame’ is now only for those who are actually ashamed.

Jeronimus: Both Daan and I are post-hippie children. Perhaps the Art Babe project is also a personal means of reflecting upon the feminism with which we were raised in the seventies.

Daan: And our fathers and mothers can be proud of us. We have created, with love, an attractive environment in which the Art Babes could break out of their culture-driven straitjacket. Stripped of intellectually representative expectations, the girls could emerge as seductive sex kittens.

Jeronimus: Women liberators . . . that is what we are.

Daan: Hahaha. Princess Máxima Zorreguieta will be delighted to hear that. Didn’t you make a portrait of her recently?

I’m enjoying the settings of the portraits—particularly those that suggest the artworld—Jantine surrounded by cocktails littered about at an opening, Anne sitting on crates presumably containing works of art, Eva among foam and bubble wrap in a storage setting. It’s disconcerting to see these banal work scenes become sexualized. How were these scenes selected?

Jeronimus: After pioneering work with the first two photos, we reached the conclusion that we did not want to offer true anecdotes. The energy that I like to experience in a photo is released when you offer a model the comfort of leaning upon both the fictional and the real.

Daan: With our photos we expose the true ambitions within the art scene. We allow dreamed aspirations to run wild in front of the camera. In the choice of locations and ambiences, we occasionally pounded hard on the loud pedal. And the women showed themselves to be seemingly at their ease within our décor of top hotels, smooth vodka and tasteful lofts. Fashion guru Margreeth Olsthoorn dressed all the Art Babes in creations of international fashion designers, such as Martin Margiela, Hussein Chalayan and Veronique Branquinho.

Jeronimus: Whereas I seek the power of a photo in a kind of immaterial intensity, Daan is more initiated into the world of luxury and comfort. Within his artistic calling, he pleads for a revaluation of the material. In contrast to many other artists he will not sneer at earthly possessions.

These photographs are like pin-ups to art dealers—a fantasy specific to the industry. Who is the audience for this work?

Daan: First of all, photo-lovers will be delighted by such marvelous images. Jeronimus has shot amazingly refined pictures. And the more general art collectors will also be astonished, not only by the scintillating photos but also by the Art Babes we have liberated. And finally, the less involved citizen is also welcome. We realize that there is a gap between the artworld and society. However, with this photo series we offer a hand of friendship. The most seductive Art Babes are presented on a platter.