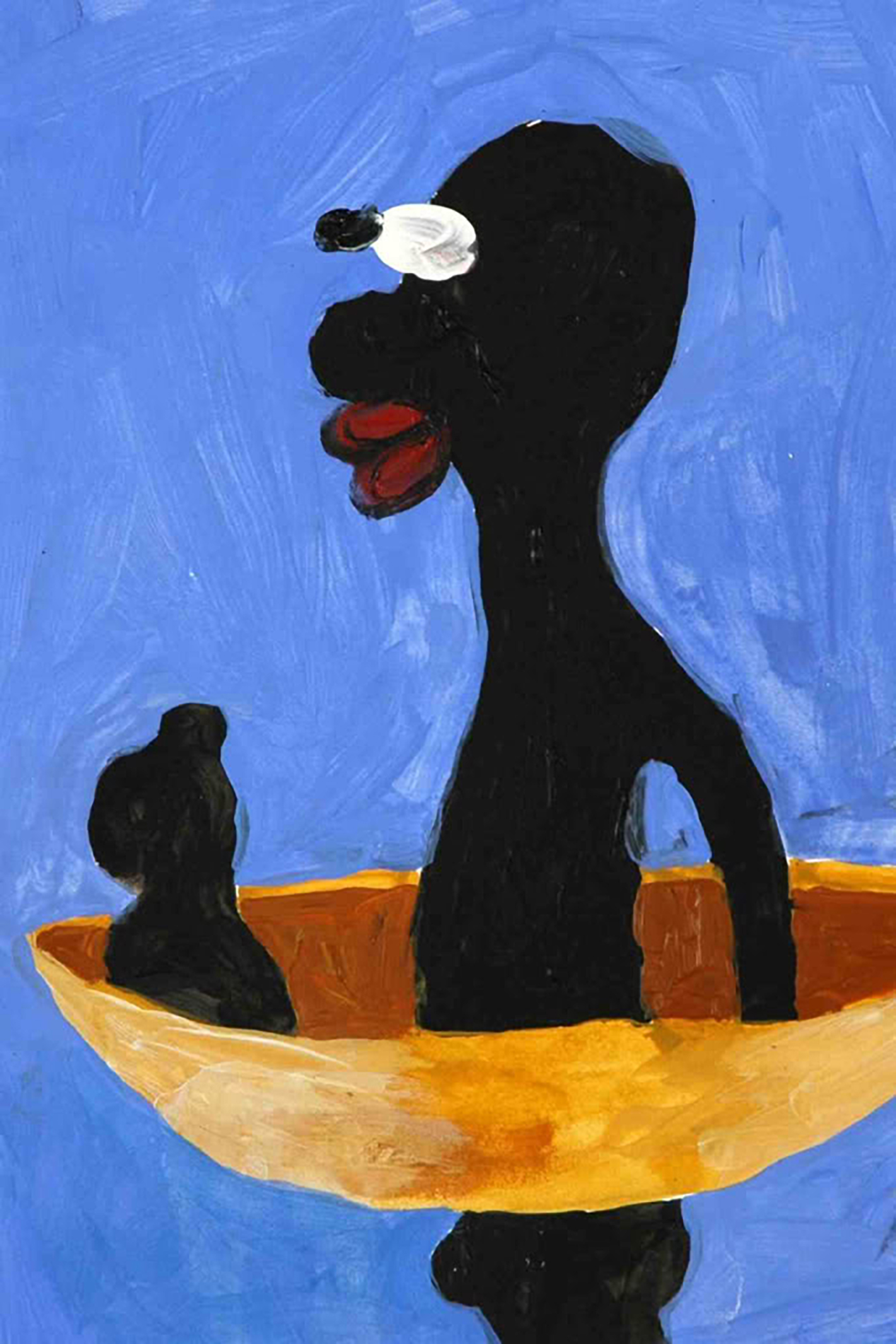 Nobody drops into the zing office out of the blue anymore. The late, great Dan Asher used to, but no one since.  Except Jeffrey Hargrave. I first met Jeffrey when one day he randomly buzzed. Expecting the mailman or UPS, I must have looked disconcerted because as he walked up the stairs he announced he was just stopping by to pick up a couple copies of zing #21 (in which he has a project). Since then Jeffrey will stop by occasionally, when least expected, to grab some magazines. But isn’t that what a magazine office is supposed to be? People moving in and out, a center for thought, discussion, debate, and sharing? That’s beside the point. Jeffrey Hargrave is an African-American artist from Salisbury, North Carolina. Now based in New York, Hargave deals with representations of African-Americans, often putting them in the context of art history, remaking works by artists such as Matisse to include black figures, with stereotypical imagery. He currently has an exhibition, “Know Meaning,” up at The Phatory in the East Village.

Hi Jeffrey. Good to see you earlier. We’re going to make this ZINGCHAT quick since your show closes on Saturday. The title of the show is Know Meaning and the work is pleasingly expressionistic yet deals in the imagery of racist stereotypes. What are you trying to say with these paintings?

That racism is alive and well, and although humorous, the paintings, drawings and video have an element of the macabre; which is interesting in itself because these Jim Crow-era images were used to degrade African-Americans, but there was a level of vaudeville comedy apparent in the illustrations.

Your first video piece is included. It’s of you singing a Lil Kim song. What song is this and what about it attracted you?

I love this rap because of its brazen use of sexuality and materialism. Kinda like a Warhol reinterpreted into a rap.

All of this work is concerned with representation—racist Jim Crow representations of African-Americans, Lil Kim representing herself as a powerful black female (which is then put in your context as a gay black male). Why is representation important to you?

That’s a very good question. Representation is very important to Lil Kim, African Americans, and myself as a gay black man. Society judges a person by what they represent and put out into the world. Lil Kim is a black woman talking about her sexual organs. She’s my hero. As a black gay man rapping the words of a black woman, I’m appealing to everyone: gay/straight, male/female. As a man having sex with another man, I’m both the husband and the wife. In all relationships gay/straight, male/female, one is dominate while the other submissive.

Your paintings are visually similar to examples of folk or naïve art. Is this a conscious choice or just your personal style?

Both. I am very inspired by naive and folk art. I also love children’s drawings and I’m influenced by them much the same way Debuffet and Twombly were. Drawing at its most simplistic and honest nature.

Paintings by your mentor, James Donaldson, are included in the show. How has he influenced your work?

He is constantly reminding me that the sky is the limit in regards to your life and artistic endeavors. He also showed me that nothing is impossible when it comes to art and following your heart.

Are there any other artists that have especially influenced you?

Interesting that you mention Walt Disney. At the gallery, you brought up the banned Disney cartoon, Little Black Sambo. What kind of influence did Disney have on you?

There weren’t too many characters of color in Disney movies and if there were they were usually singing songs with animated animals about how great life was or swinging from vines in the jungle. I was always glued to the TV whenever a Disney movie came on. My fav was The Sword in the Stone. The Disney charisma reached out to all. I have always been into the science of magic. Merlin was my own personal Houdini. But Walt was the greatest magician of all, and his magic was the ability to reach us all. That’s what I strive for in my own work.