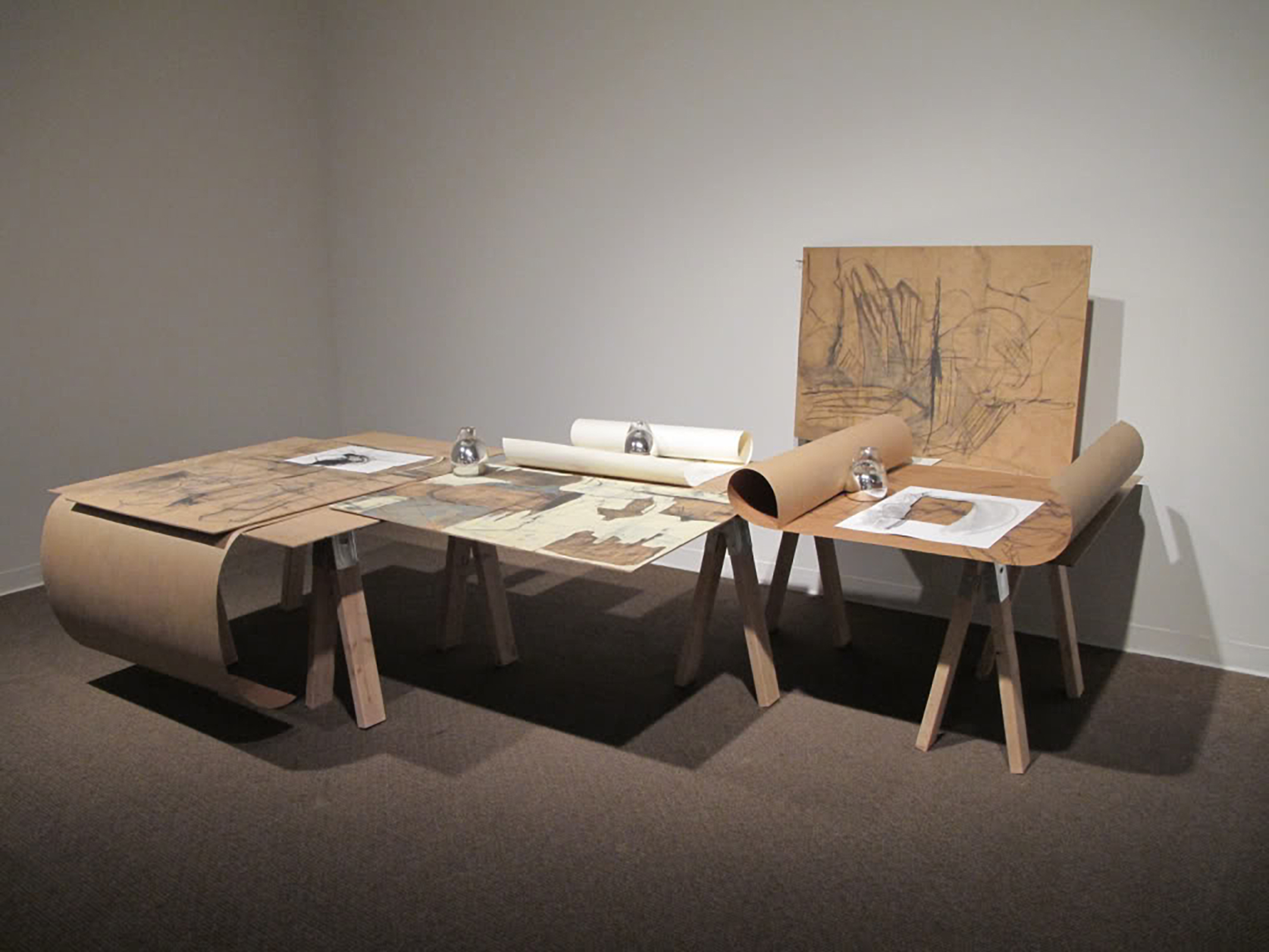 J Parker Valentine’s work whispers: but her whispers exude cackles of thunder. Installations made of drawings negotiate a special place between the practices of both traditional works on paper and works of installation and object making. And in doing so they challenge the way these practices support and reinforce each other. The “drawings” are unrolled, cover one another, lean, are attached and weighed down, rest on other objects including tables—walls themselves are surfaces to be reckoned with, and drawings are even regenerated from other projects. These drawings in situ create assemblages of much larger presences that envelope, engross, charge, and frequent the space they inhabit—installing themselves in and around the viewer and the space. This flurry of quiet activity challenges gravity, loudly announcing a different language while demurely allowing for a different voice. We exchanged emails . . . Here is what transpired.

Frank Stella’s On Painting makes a case that his “literal painting” is “pictorial”—that the physicality of the work has little to do with anything but the sum of its “pictorial” existence. Whether these aims are achieved in his work or not, I think it a useful way to approach your work. You make drawings that “literally” invade the realms of sculpture and installation, even performance. Will you speak about this . . .

I do see what he’s claiming as one way to perceive something. I’m also working in this intersection between physical form and image. For me it is often between drawn lines and the physical linear forms created by simple planar structures—for example the curve or bend in a piece of paper, or the angle of a panel. However, I’m trying to bring attention to the opposite of his case—that the physicality can’t be ignored, and a sculptural experience can and often does coincide with an image-based one. In my work, the three-dimensionality typically arises out of the process of making the drawings, more than as a point to be made.

Speaking of performance, one thing I find most interesting in your work is what you don’t show, the drawings that are hidden, the installations that seem interrupted, the gestures the viewer has to guess at, and those edited and not shown. How does this kind of performative improvisation process come about, studio to exhibition?

In the same way that frames are edited out of a film, some of my drawings are hidden. The difference is—you can see that I am hiding something from you—this is a sculptural property that creates a performative relationship between us. In the same way that I use erasure in my drawings to create an image, the blatant covering of an image with another creates yet another image. There is a recurrent push and pull of additive and subtractive processes.

The end product is often a palimpsest that reveals the evidence of time and action. Everything is improvised because the structure is based on discovery. 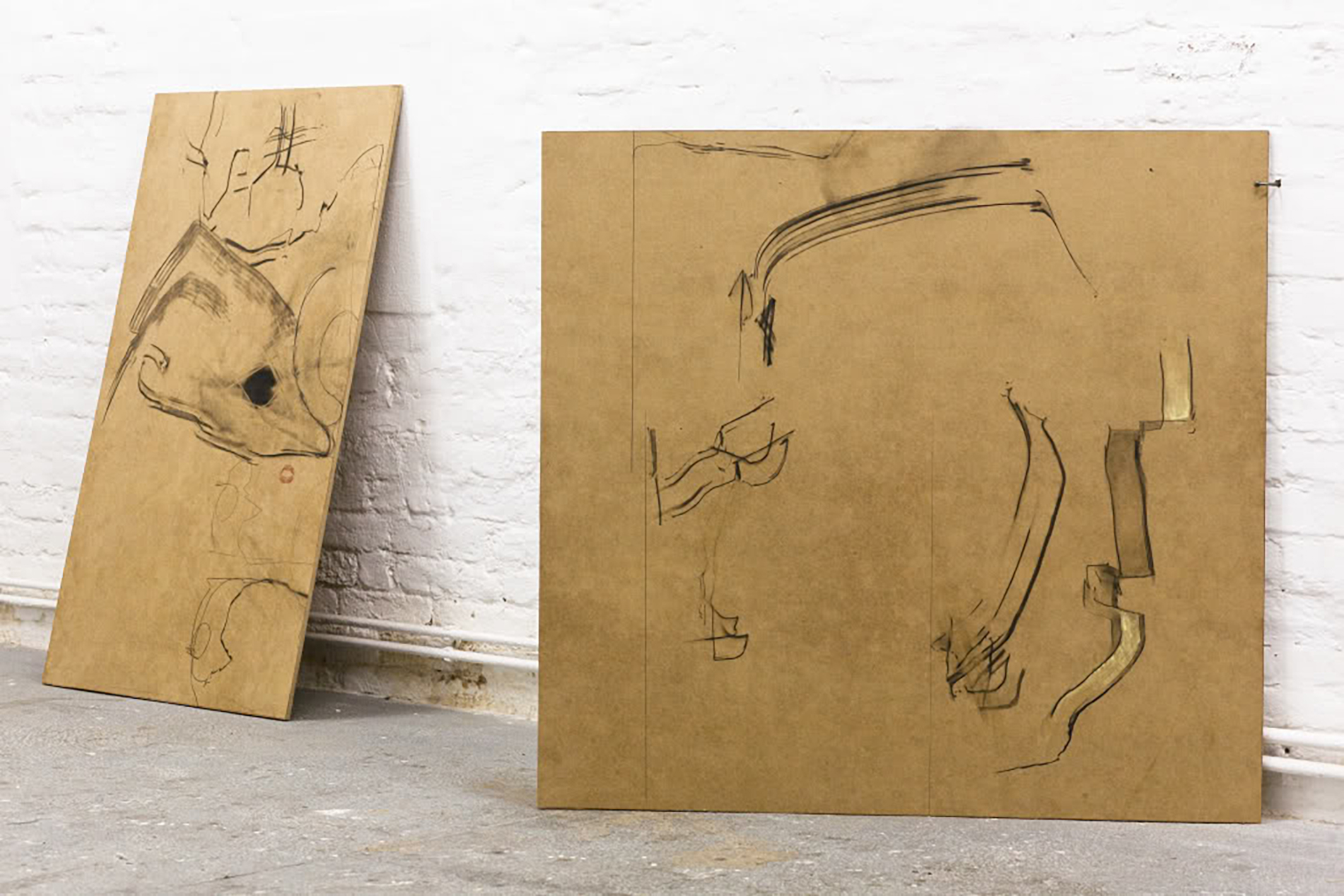 The materials themselves are often mined from previous works of yours and/or are recycled. This practice in turn creates a funny Nietzschian “eternal recurrence” in your work, each work exists as part of several works, both past and future. Will you speak about recurrence, eternal or otherwise, and the use of recycling as a strategy and a medium . . .

As I approach an art object as a problem, there are often many potential solutions to resolve that problem. If the artist has anything, it is the authority to make a decision on the resolution/non-resolution of a work. I am very interested in the poignancy of this decision.

When something leaves my hands, it’s finished and it’s frozen in time in its determined orientation, but if it has not yet left, I can continue to look for alternative solutions. This can be by combining it with something else. This might give the work an unfinished character—an openness to resolve, hence my interest in abstraction, which by nature, is open.

As I work on drawings, I photograph them. I collect these images in a folder on my laptop whether the works are finished or not. There is no apparent organization to this—something might be photographed once or many times in it’s process and nothing is labeled. There is really no delineation between separate works, there is no “right way up,” and the hierarchy is obscured between “good” and “bad.” This is not to say that I don’t choose particular successful drawings out of many to exhibit, but looking back at these photos and seeing how they relate from one to the next helps me to learn what a successful drawing might be.

I’m A-OK with fate. There is nothing precious with how I treat my objects. If my cat bites into a sculpture, fantastic. I often travel with a tube of rolled drawings. The edges do not stay clean, they don’t lay flat, the drawings have rubbed off onto each other and this is usually how I display them.

The way Mondrian used black & white as color—because of the sharp juxtaposition to the primary colors in his compositions—or how Impressionist palette was based on the juxtaposition of one color playing off the presence of another—is useful to think about in relation to your use of color. You use the intrinsic materials’ colors and juxtapose slight differences and nuances between and among them to create and achieve similar color connections/juxtapositions. What is the role or how do they, materials and color assemble, create, and dance through your compositions/installations?

Limiting myself to the intrinsic colors of materials allows for less “work” and thus more immediacy.

In certain ways, I think about image and color along the same lines. For example a found image of, say, a sunset, is similar to found piece of yellow fabric in the way that I do not need to draw or recreate that sunset or paint the color yellow, because they already exist. For me, drawing is not about recreating something, it is about finding something. The use of a particular image or color would most likely be due to the fact that I found it (or photographed it myself), kept it around me for a while, re-looking at it over time, and finding an importance in it, and thus a juxtaposition most likely to something I have drawn.

I’m very attracted to color brown of the mdf panels I use and the richness of graphite against it. Graphite is reflective and depending on the light or from what angle you look at a panel, it can look black against the brown, or silver and hard to see. The dichotomy between image and material is one of many in my work—the archetype being that I constantly look for form, while at the same time avoiding it.

It is as if you undertake drawing, and its intrinsic limits, and screw with all the Big Wigs that began to screw with drawing in the first place. Serra, Twombly, Tuttle make drawings by way of their final product, be it sculpture, painting, or installation, and in doing so, dismantle our traditional notion of what drawing holds. You make drawing scenarios—sculptures, installations—that use the implicit practices that drawing encompasses. At the same time you negate the essential rules associated with drawing and in the process create a new definition of drawing by way of installation and sculpture. Please give us your thoughts about this . . .

Yes, I think I do make drawing scenarios. In art school, I had no real interest in any prescribed issues, so I decided to create my own. I found that I needed constraints to work off of, and I found these in the intrinsic limits of drawing and drawing materials. Also, I have a strong interest in time-based media but wasn’t content solely dealing with the consistent technical problems of film and video and looked for more basic materials that could allow me to explore a shifting image with more flexibility.

My drawings naturally moved into the realm of sculpture when I started drawing on MDF panels. The panels had to be constantly moved around, cut down, and stacked particularly for a lack of space. The activity was physical and so were the materials. There is a sculptural property to the way I make the drawings (adding and subtracting), to the drawn images themselves, and furthermore in the presentation of them. 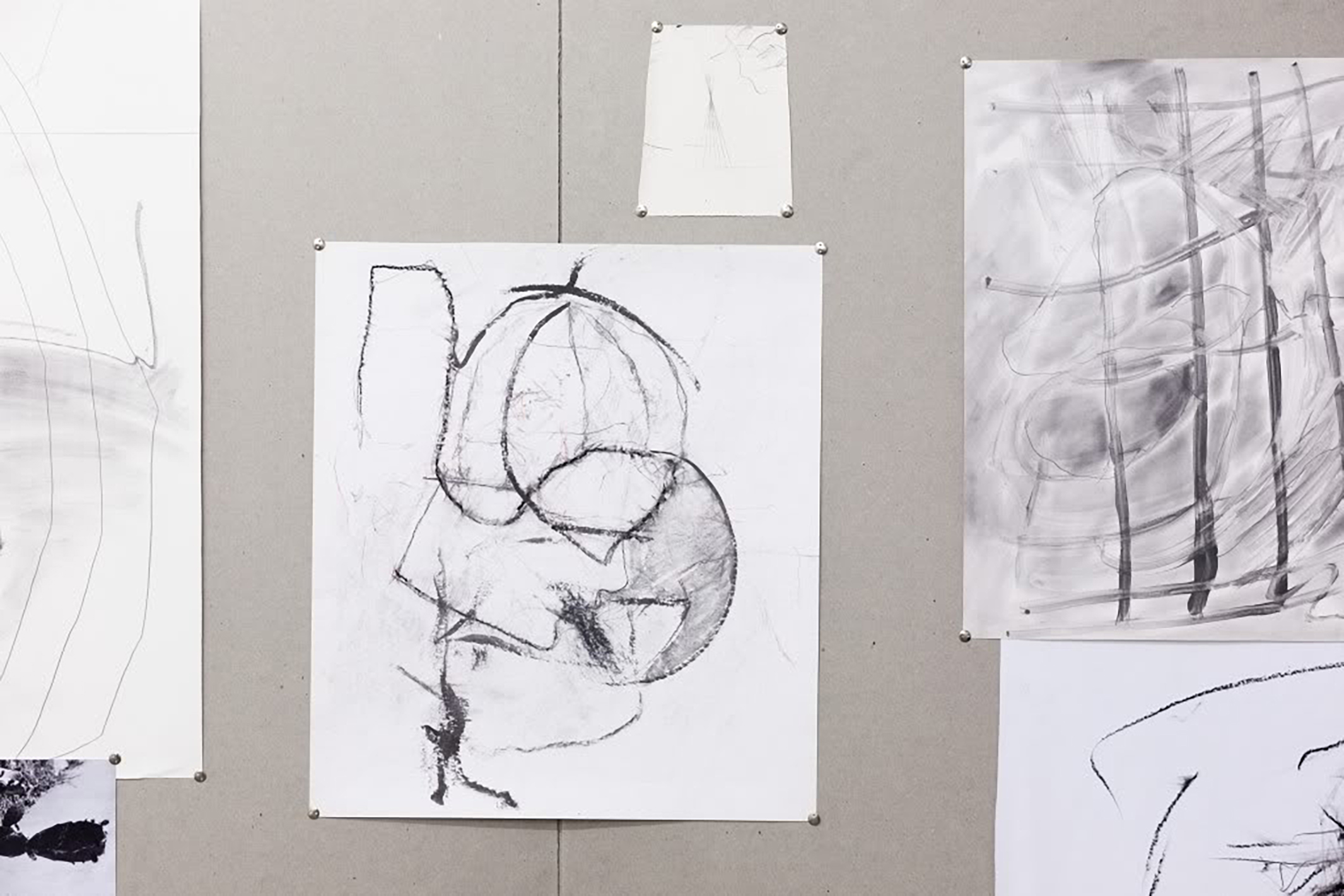 The use of found objects, like the paper weights in your work (Untitled with Paperweights) at AMOA . . . they both function literally holding down drawings and visually becoming reflective mirror orbs, compounding the space and the visual and literal implications by their presence. Luis Barragan, the Mexican architect, used mirrored orbs in a similar way. What are the architectonics of your installations and especially the found objects, like the orbs?

My structures are set up to create intersections and associations between drawings. Their relation to the architecture of the room is primarily one of support, but also to create an active viewer that necessarily has to move to see things.

The reflective mirrored paperweights acted in the same way a body of water might act in a landscape, expanding and manipulating the visual space and drawn environment. But I also chose to use them for the contrast between the near perfect reflective forms and the povera-type materials.

You also use gravity to express the architectonics, in the way you lean an MDF Board against a wall (Untitled 2010) or balance drawings on work horses (Untitled with Paperweights 2011). Can you speak about the role of gravity in your work?

I use gravity as an intrinsic material, like others that you mention earlier. It always works perfectly, its symmetrical. It’s the glue of our world.

What’s on the horizon?

Right now I’m working on a book of drawings in collaboration with Peep-Hole Milan to be published by Mousse Publishing, and a solo show next spring at Lisa Cooley.