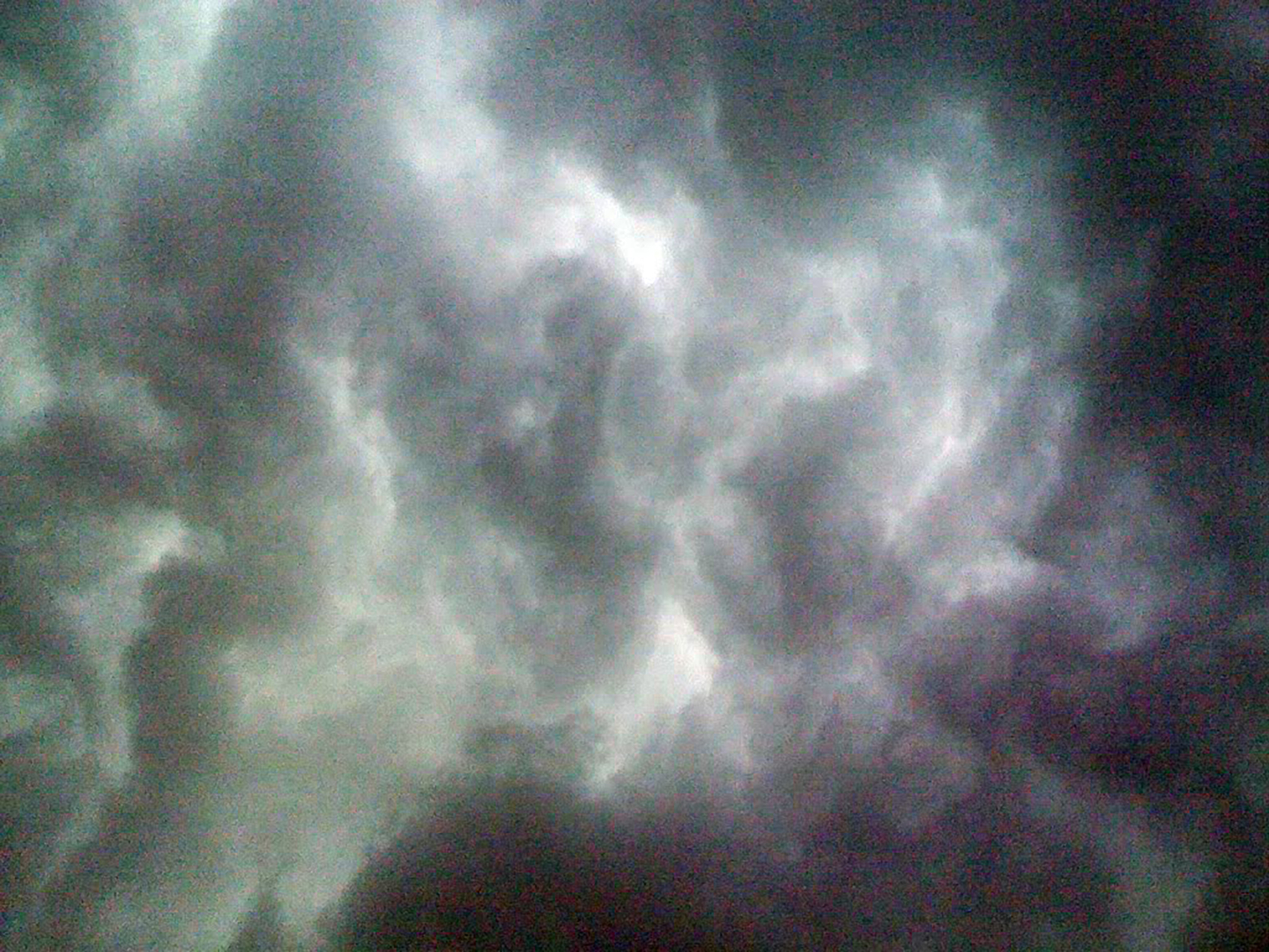 Devon Dikeou: You haven’t shown in 15 years. How did you get back to making work and how did this exhibition come about?

Geraldine Postel: I didn’t expect to do anything with these pictures, it just happened that I took them as I was struck by a storm, at a special moment of my life, where the elements matched my emotions: I was equally devastated and inspired by the sky roaming above me. I really felt a special connection with my surroundings and at that specific moment, the sky and I were in tune, in synchronized revolutions. It lasted three hours, and I was literary blown away by the spectacle above, the strength of the elements, the rain pouring, soaking me wet, the thunder bursting everywhere . . . I was alternatively amazed and afraid, time had stopped.

I took these pictures as I take many others on a daily basis, when I feel a personal relationship to what I see. I keep some of the photos for myself or to share with close friends, and I throw the rest away. The next day as I was still reveling from the spectacle the night before. I realized how specific this moment was. I could not erase any of it, nor could I erase from my memory what realizations I had personally or visually in the process.

When I made these pictures, it was a true moment of decision-making and awareness. It was time for me to make a new step and take charge of my destiny again. I was convinced the voice of the elements reinforced my energy towards this new direction, although I did not think for a second that this was going to lead to my first exhibition in 15 years. In fact, I was terrified when the gallerist, Serge Perkowsky, proposed an exhibition a few months later at Galerie du Singe en Hiver, but I could do nothing but accept the challenge.

DD: Talk about the historic relationship the Normandy locale plays in your work.

GP: Normandy is my small paradise two hours driving distance from Paris, which I have a personal relationship with; I have been running there for shelter to a small fisherman’s house I have there—to escape the rhythm of Paris for the past few years. It is located between the cities of Deauville and Honfleur, but my home is removed in a small village on a very quiet beach . . . World War II bunkers leave two sporadic concrete shadows, and everything else is raw nature.

I love Normandy for the light, and the peculiar landscape of the shores, the wide movements of high and low tides which transforms the landscape constantly. This area has also inspired many creative types for centuries—writers, musicians and artists including Flaubert, Marguerite Duras, Eric Satie, Eugene Boudin, Monet . . .

DD: Talk about your relationship to the following artists. Say as much or as little as you like. Turner.

GP: Well, Turner is truly an amazing painter to me, he has painted countless seascapes and situations where the skies are amazing, he also was often inspired by the struggle of mankind to face the strength of the elements and its inherent fatality, with philosophical and historical references. It seems that a sense of tragedy is also recurrent subject. I could have a connection with Turner, in the movement of the skies and the landscapes themes, but I’d rather associate with Emmanuel Kant’s “Aesthetic Judgement”: I admire the beauty of the sublime as opposed to suffer from it.

GP: If there is a way to reproduce the light, the wind and capture a sentimental perception of nature and time passing by, Monet is a master. Monet was also very much inspired by Turner for the way he painted the fog over the Thames, and he did a large series of paintings on this subject. I have to admit that I found myself referring directly to the specific series of Monet’s paintings of the London Parliament, in which we see a tower fading in the corner. It was painted at dawn, and the tower dissolves in the night. It is very dark and Monet captures the accurate light of a landscape after sunset. I saw this piece again recently, as it is part of the permanent collection at the Andre Malraux Museum. The Museum is in the harbor of Le Havre, located in Normandy, and I went back three times to see it again. Monet was born in Le Havre by the way, that’s also where he painted Impression Au Soleil Levant . . .

GP: The natural phenomena reproduced by Veja Celmins are very interesting. Often I sense that emotions are somehow removed from the images, it feels like she is quietly witnessing the waves of life.

GP: I have read the review in zingmagazine, but am not familiar with the work.

GP: I love the way images are decomposed with all kinds of accessories breaking it into sorts of large pixels and “a plats”. There is a lot of strength emanating from Vik Muniz’s art. It’s beautiful.

GP: I really admire him as a photographer and artist. His landscapes and all his work around cinema strike me the most. Somehow there is an incredible quietness in the witnessing, a raw capture with a distance from feelings, a sort of mind game. He also did a large series on clouds, in color, which are very light, playful and, of course, this book, Clouds Don’t Care, but this book does not have anything to do with my work. Things happen for a reason . . . I can say that among the many reasons that lead me to do this series, he had a direct cause and effect on my work and my life, and what followed from that.

GP: For some reason I have a hard time with the religiously inspired decorative painting. Most of it is so beautifully executed, and full of life and lightness, but I really have a strange relationship with it. It’s probably because of my religious upbringing, I’ve had enough religiosity from Catholic School . . .

DD: Why the iPhone medium?

GP: It was the only thing I had at the time. I have a strange relationship with photography. Every time I have made pieces involving the photographic process, I used the process and mediums current to the time—disposal cameras and Xerox machines in the ‘90s, and an iPhone today. Since I am not a photographer, I like to use these popular everyman devices as a medium.

DD: Why the necessity to make them into objects?

GP: The iPhone is too small of a format to show more than one person at a time. The enlarged format as it hangs in the gallery is beautiful as it is now. It is digitally printed on glossy paper, mounted on aluminum and covered with a Plexiglas. The enlarged pixels have a strong effect—it is almost Pointillistic. I wanted to make it into high gloss photographic wall piece, where the pieces show that they are neither a painting nor a photograph: they integrate codes from both.

DD: They recently discovered a new kind of cloud in Iowa and elsewhere and it was just someone taking pictures of the sky, somewhere near a tornado. I think the cloud form is called asperatus. Tell me your feeling seeing these kinds of clouds.

GP: I had to look it up on the web, I had no idea what asperatus were . . . But yes I think I have seen this kind of cloud, I continue to be impressed everyday by clouds and light . . . I am not a cloud expert, but find myself attracted to the cloud watch associations and all related websites, in fact the NASA website pictures are some of my favorites—that’s how much I like to look at the sky . . .

DD: Were your shots from this series just a one-time explosion of picture making or edited from a long ongoing series.

GP: All images were edited from a larger series, but they were all made during the same storm, on the very same beach. It’s also where I happened to have the exhibition. It all happened in Normandy.

DD: Do you try to see things in clouds, like children see a bunny?

GP: All the time, I see things in clouds, on buildings, in water, in shadows, in architecture, I see things everywhere as soon as I let my imagination go . . .

DD: Where do you see your work going?