Edgar Serrano: Rumors of My Demise 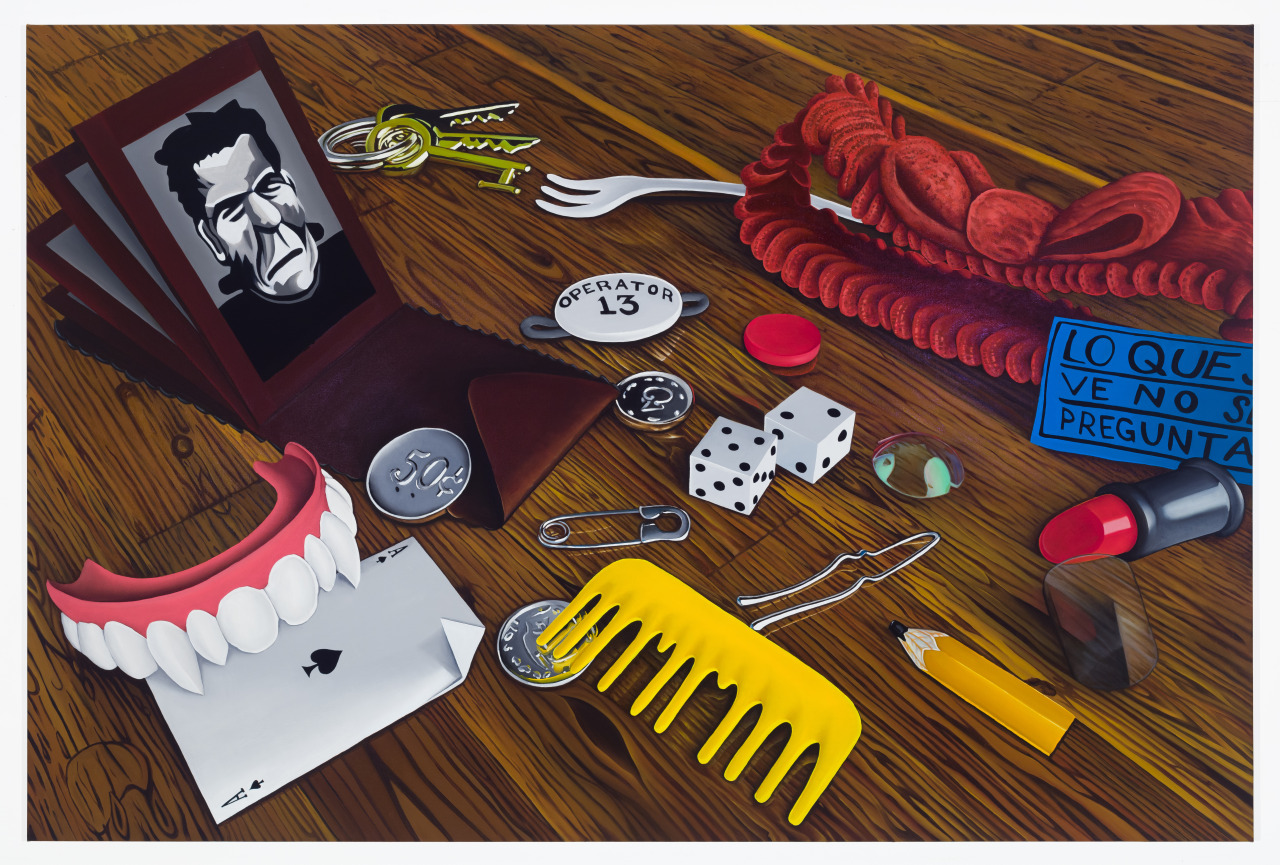 Edgar Serrano is a painter whose work integrates a range of visual aesthetics, iconography, and even materials, dissolving unstable borders between popular culture and fine art, analog and digital, self and “other,” while challenging xenophobia and reductive representation through appropriation and complexity. Born and raised in Chicago, he now lives and works in New Haven, CT where he earned an MFA in painting and printmaking from Yale University School of Art. His solo show Rumors of My Demise is the inaugural exhibition at Brief Histories’ new space on the Bowery in New York. Rumors of My Demise runs through January 8, 2022.

Where are you from, where do you live now, and how has your environment affected your work?

I am originally from the west side of Chicago and lived there until 2008 when I went away to graduate school. After graduate school I lived in Brooklyn for a few years doing art residencies and trying to maintain a studio practice. The stimulating thing about Brooklyn was how everything was mixed up, different ethnicities, different cultures, different perspectives all interwoven and in tatters but beautiful, nonetheless. This is vastly different than the environment I grew up in Chicago where the city itself is designed to keep everyone segregated, isolated, and in place.

I currently live and work in New Haven, Connecticut. Connecticut is interesting because it prides itself in being socially progressive and inclusive environment. From my experience it’s also very segregated but in this invisible and unspoken way. I grew up amongst unseen but ever-present borders that have sharpened my senses and shape my practice. Looking into different worlds, either through art history, or Saturday morning cartoons, to wider political, economic, and societal issues I am drawn to the borders and peripheries dividing these worlds. 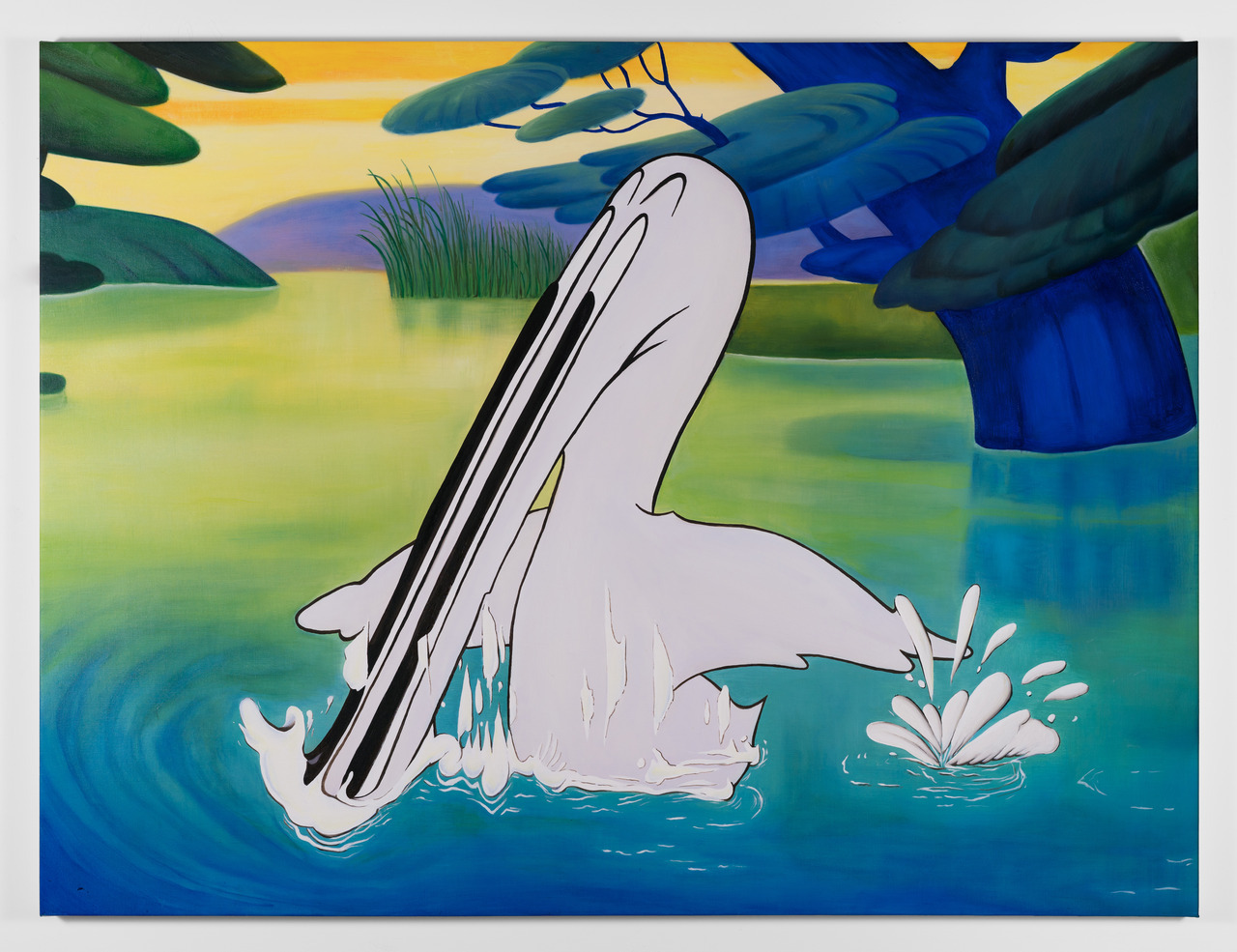 Could you speak on how these borders and peripheries manifest in your paintings, whether in terms process, form, and/or subject? For example works like “Eternal Artifice” appear to be in a moment of flux or transition…

Recently, I’ve been interested in the hand drawn “animation smear” which depicts one quick blur of motion in a single frame and the illusion of movement found in cartoons from the Golden Age of American Animation (1920s-60s). By using video editing software, I can analyze video files frame-by-frame, isolating and excavating normally invisible moments of transition or blur.

“Eternal Artifice” for example was initially excavated from various childhood cartoon sources using my personal archive of VHS tapes and video editing software. Resulting in images that are both familiar and strange, showing well-known cartoon characters in states of transition that are usually undetectable to the human eye. Due to the speed of film and the sequential duration of these short states of transition.

In my research I found that these in-between “blur or transitional” movements in cartoons from my childhood, mirrored my own trauma of not knowing English initially as the son of Mexican immigrants and that of migrant children in detention centers. The blur acting as a state of being caught in-between two realities, flux, or a limbo state. My relationship to these images is both symbolic and contains a dark narrative subtext.

A few of your paintings, such as “I am an Enigma, Even to Myself,” “The Sun Doesn’t Set It Just Goes Away,” and “Encyclopedia of Invisibility” include a Frankenstein-esque figure or silhouette. Is this a self-portrait of sorts? How do you relate to this misunderstood “monster”?

I sometimes evoke the tropes and aesthetics of villains and monsters as a metaphor for marginalized identities. Cartoon monsters as abstract representations of how people might perceive me or others that resemble me. For example, the werewolf, the intruder, or the Frankenstein monster, operate as proxies. The Frankenstein monster in particular is a monster with compassion and who also suffers from a complex identity. Feeling misunderstood, he causes fear due to his appearance, and that same fear makes him afraid. This sentiment is mirrored in the social realities of contemporary America: the fear of the unknown and xenophobia. As we know through great literature and perhaps in art, humanity’s irrational perceptions and fear are the true monsters.

I am still interested in imagery grounded in reproductions, like cartoons, postcards, and comics. But I am also clearly interested in and responding to the political and social context around me.

Some of my visual influences range from postwar/contemporary German artists who moved from abstraction to figuration in a new way like Gerhard Richter, Sigmar Polke, Albert Oehlen, and Georg Herold.

Recently I’ve also become attentive to the inadequacy of abstraction to clearly delineate meaning, which leaves room for a fresh perspective and to make new meaning. Some of the other artists that I see as exploring this territory are American abstract artists like Rochelle Feinstein, Mary Heilmann, and Jessica Stockholder. This inadequacy leaves the door open for invention and opportunity in painting, which appeals to me.

I am also invested in Carroll Dunham’s work. As I see it, he disregards the boundaries between high and low art and gathers diverse vocabularies into one picture frame to create immediacy and impact. Ideas and feelings come from one direction and social and political conditions come from another direction. I try to approach painting from a similarly messy hinge point. 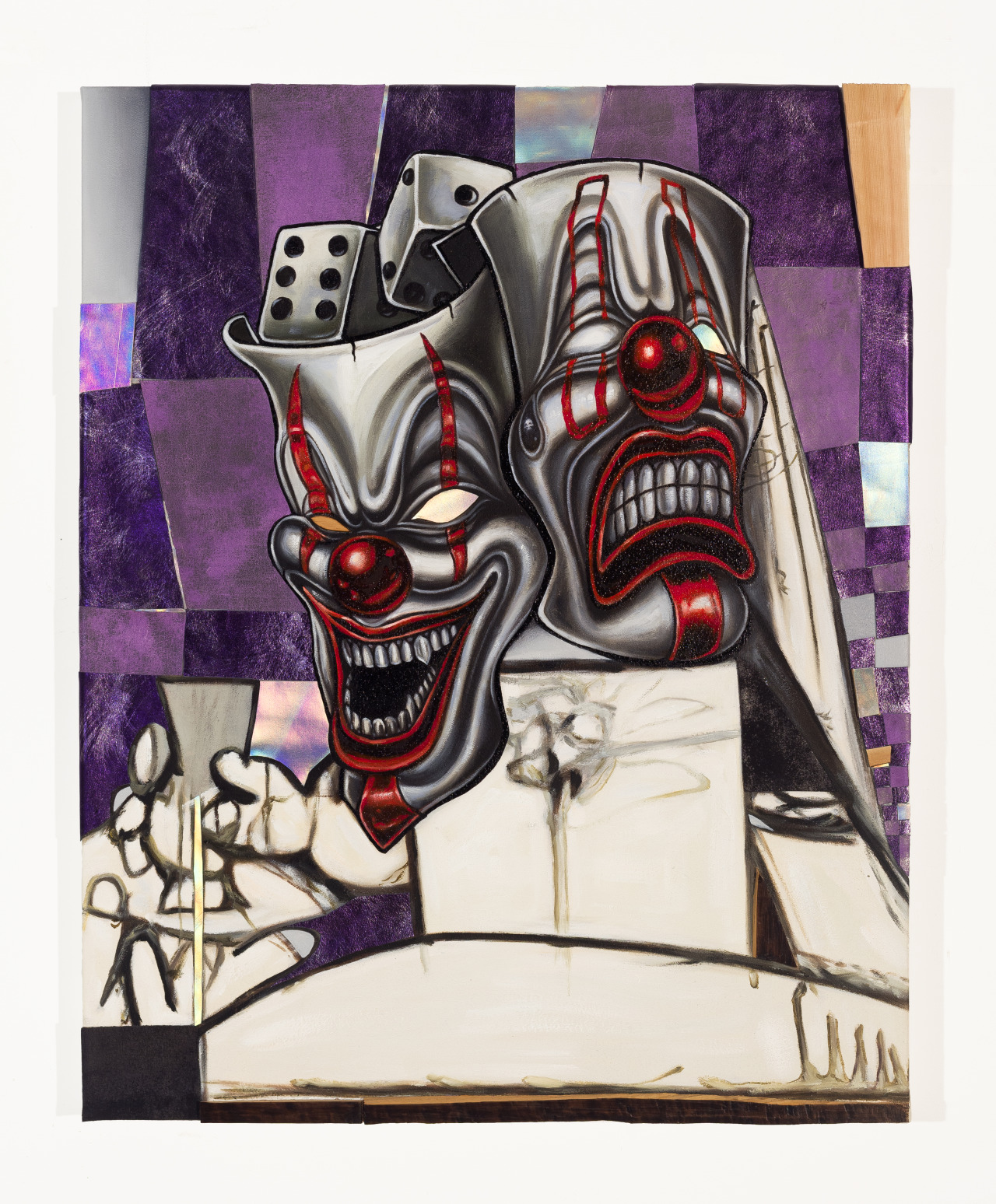 This hinge point is interesting in relation to some of your newer work, which incorporates pop cultural imagery based in Latinx culture, including photorealistic depictions of cholos, clowns, masks, and low-riders, with art historical references, abstract forms, and materials such scrap leather and wood. What is it about the dynamic between these elements that appeals to you?

We are all molded by our environment, more so when we are young. My early life seeps into the work. But I am not interested in replicating the conditions of my upbringing. Instead, I want to infuse these memories with my present self and contemporary issues. My hope is that these dichotomies of Latinx culture and art historical references that hinge in my lived experiences demonstrate my willingness to be open and vulnerable while also leaving room for subversion.

Regarding materiality, I use wood and leather to index a kind of Primitivism which I hope also subtly conveys issues of cultural power.

I am curious about the idea of Primitivism as it relates to Modernist Art that has appropriated artifacts, carvings, and images produced by ancient native cultures. Primitivism is of course a condescending term coined by so-called enlightened civilized Europeans to refer to the art of the “uneducated and uncivilized tribes of Africa and Latinx America.” The word Primitivism presupposes a lack of evolution in these cultures and the art that they produced.

I’ve been thinking about self-taught art as a kind of primitive mask that both obscures and refracts representations of the Latinx. The kind of contemporary “primitive” masks I am talking about can be found in stickers distributed in low-income communities via vending machines that are meant to appeal to young children. I am interested in how these images facilitate identity formation as these unflattering mass mediated images circulate stereotypes within and outside of Latinx culture. In contrast, my work attempts to use these images to construct subjects that contain their own complexities and agency. 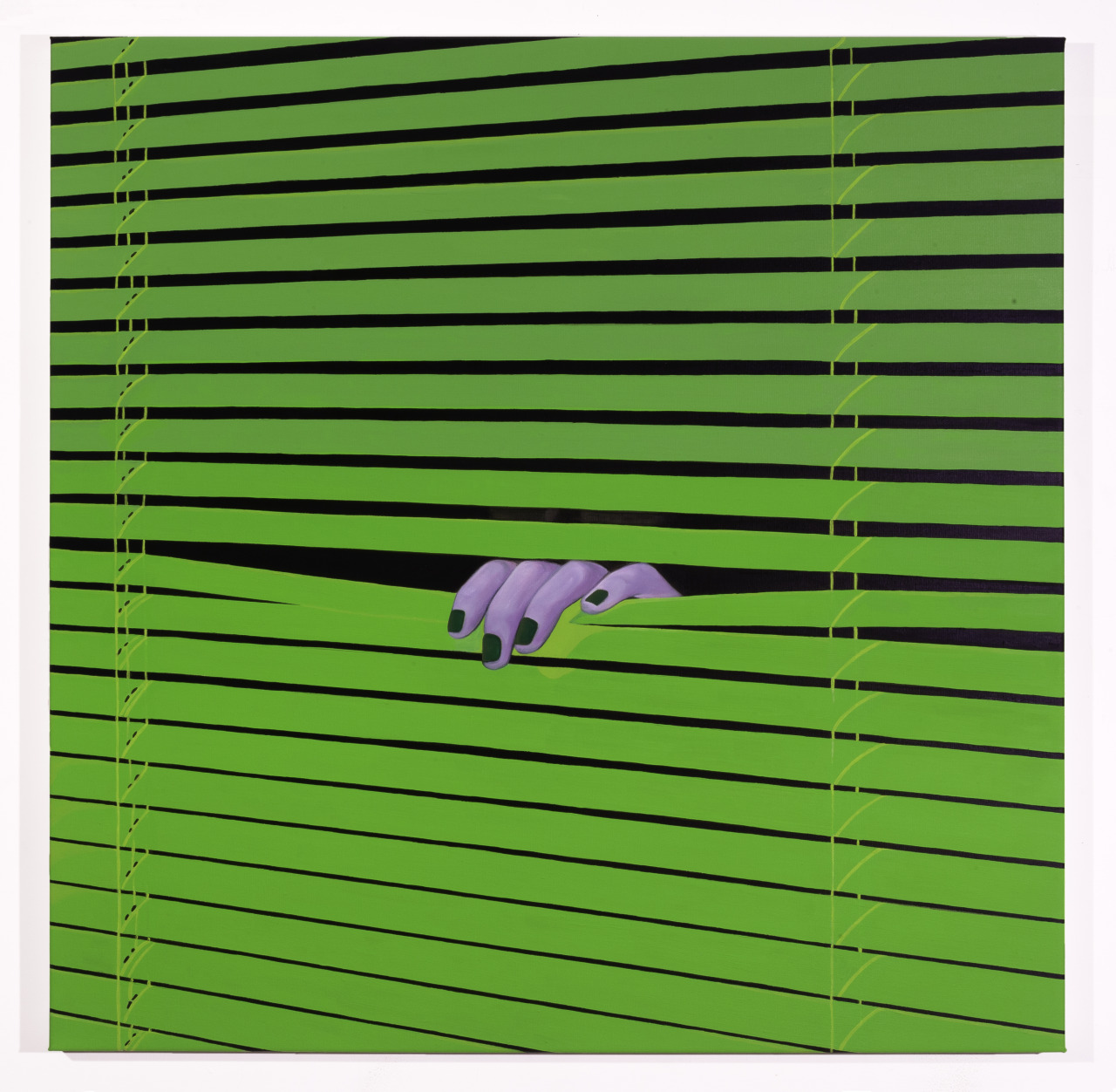 One of my favorite paintings (or series of paintings) in the show is “Intruder,” the first version of which appeared in your issue #25 zingmagazine project. What does this image of a hand pulling apart blinds signify to you? And why haven you chosen to make multiple versions of the painting?

For the “Intruder” series, I considered how the window has been used as a metaphor for painting: a transparent screen that offers a glimpse into another world. This series began with an image I found on the internet that I then digitally manipulated. Combining the metaphor of art as a window to the social imaginaries of xenophobia in contemporary America, the window also works as a metaphor for screen culture, translation, the flattening of information, and a border or boundary between worlds. I use the Internet as a window to an eternal present and intermediate space, separate from lived time; it offers me both a way to understand our present and a chance to see a future beyond oppressive traditions and hierarchies.

I also like to think of the window as a transitional space: It offers me both a way to understand our present and mirrors my own experience of existing in-between cultures as a Mexican American. I see the hands pulling apart blinds as abstract representations of humanity. Are we looking in or looking out?

The reason for the multiple versions is the limitless possibilities that are available by using digital image editing software. Also, my renewed interest or perhaps permission in seriality stems from recently reading, Van Gogh The Life by Steven Naifeh and Gregory White Smith and also The Andy Warhol Diaries. Both artists drew repeatedly from the same subject matter. Like a meme, this reliance on a single source opened the possibility to create endless and imaginative iterations from a single image.