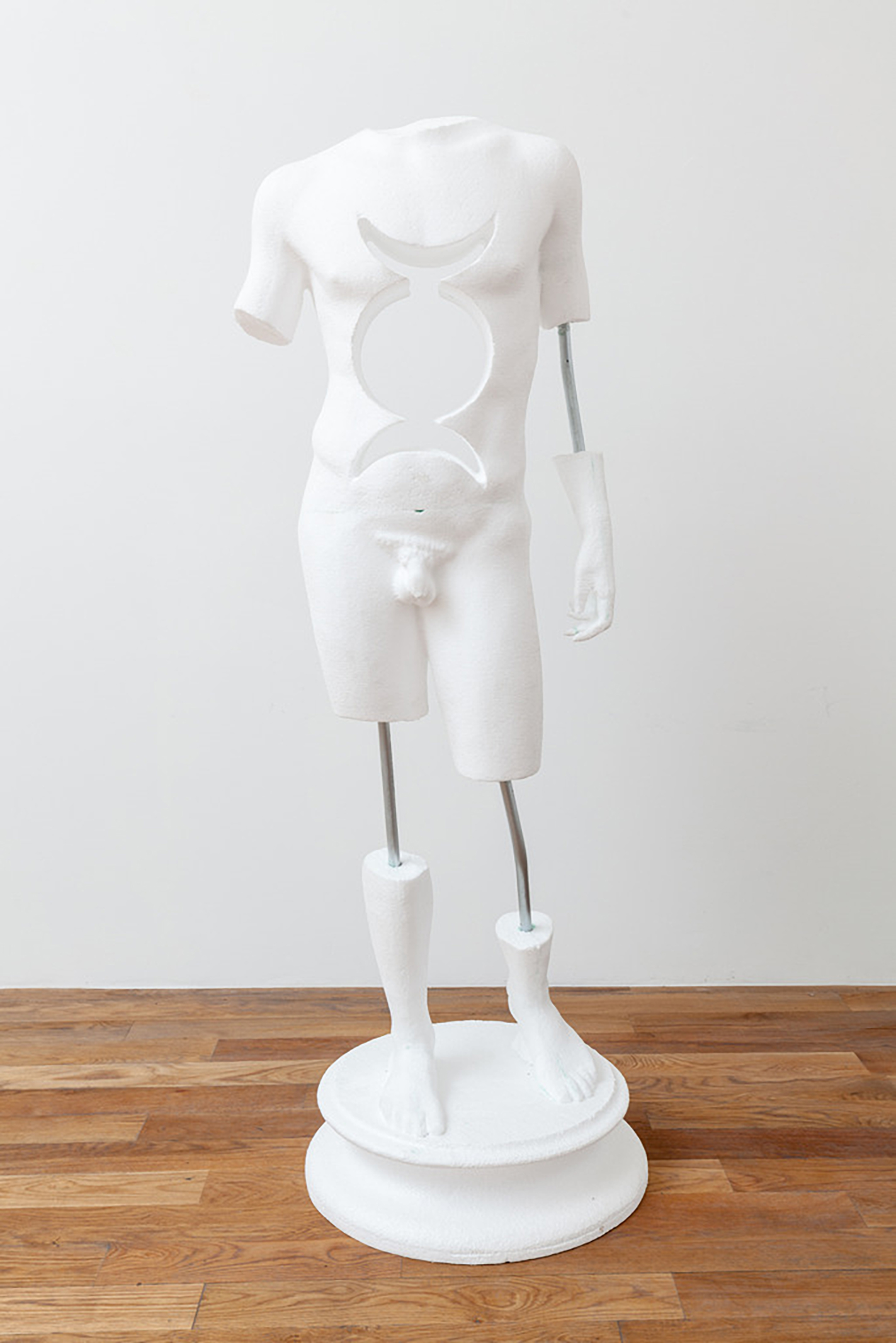 Dmitri Obergfell is a multimedia artist from Colorado. He received his BFA from Rocky Mountain College of Art and Design in 2010. Obergfell has exhibited in Denver, Chicago, Los Angeles, Rome, and the Czech Republic. He currently is showing work in both the Denver Art Museum’s Mi Tierra: Contemporary Artists Explore Place, and a solo show at Gildar Gallery, Man is a Bubble, Time is a Place. Obergfell’s solo show continues themes of classicism and considers concepts of time. Man is a Bubble, Time is a Place is on view until May 6 at Gildar Gallery in Denver.

Initially you studied photography and video art at RMCAD, correct? At what point did you shift into sculptural work? How does your video/photographic background inform your current practice?

I have always made sculpture. Yes, I do have a degree in photography and video art, but the program I attended encouraged exploration. One of the reasons I focused on photo/video is because I could continue my interest in other mediums. I am happy with the basic knowledge of photography I maintain as it has helped me train my eye and hone some software skills, which I use in art fabrication nowadays.

Could you explain the process of fabrication that went into creating your sculpture Moonwatcher?

The fabrication process for Moonwatcher is an important part of the concept. This artwork would be totally different if it were carved out of stone by hand, rather than CNC routed out of polystyrene. Moonwatcher’s Greco-Roman form is used to create a contrast between ideas of the past and contemporary means of production. Moonwatcher’s fabrication process started as a 3D scan from the creative commons of the Internet. I downloaded the 3D form and then augmented it by cutting the limbs and cutting out the negative space in the torso. After I made my changes to the form, the file was sent to a CNC router, who carved it out of polystyrene foam. I am excited to continue with this process because it has a lot of possibilities moving forward. Projects like the Institute for Digital Archaeology are inspiring because they use similar techniques to resurrect artifacts that have been destroyed in places like war-ravaged Palmyra.

Moonwatcher has an ancient symbol cut out of its torso, the Triple Moon, and like the figure it is cut out of, it rather instantaneously signifies to the viewer that it is something ancient. To my knowledge, that symbol is associated with pagan goddesses. Embedded in a sculptural body that basically encapsulates the male ideal form, I can’t help but think that you are getting at some sort of ideal gender binary within your sculpture. Was this at all intended? Most of your sculptural work that I have seen contains male figures. Do you consider gender at all in your work?

No that wasn’t my intention, but I see how it might be read that way. It’s an interesting interpretation and question, but I can’t say that gender is my first consideration. I have picked figures based on gesture more than gender. Keeping that in mind, there is probably to be said about how women and men are represented in antiquity. I would be remiss to pretend to know what that is, but it would be interesting to research it more.

Not just in your current solo show, but in general, your work seems to link different important movements or imagery in art to present day, making them, in a sense, relevant once more. You are engaging with Greco-Roman art and its pervasive aesthetic, and subverting—at times—expectations and meaning that such an aesthetic inherently carries. Because of the process in which you fabricate your work, you are also dealing with the modern concept of the readymade. How do you go about reconciling concepts and imagery that seem inherently at odds?

I don’t believe the imagery and concepts are at odds. The history of Greco-Roman sculpture extends to mass reproductions being made today. I use the Greco-Roman forms in a present-day sense, they are devoid of their original color and are often displayed with limbs missing. These reproductions present themselves as ontologically charged ready-mades, which simultaneously reinforces the Greco-Roman aesthetic and erodes its original meaning.

I enjoy the way you employ ancient statuary. In your exhibition at Gildar Gallery, I felt almost as if the classical aesthetic of ancient sculpture is for you so reproduced and ubiquitous that it has become a recognizable object or sign. You use other ancient and contemporary symbols throughout the show, most of which are part of works that are coated with chameleon automotive paint. What are you trying to accomplish by embedding these different symbols into one piece of art? Are you trying to build on the associations and meaning that they carry, or are you trying to render them meaningless?

I am reflecting on the the symbols’ similarities despite the different times they were created in. I like to speculate on symbols from this period that might carry the same resonance as those from ancient times. Symbols like corporate logos and emojis may become our society’s version of hieroglyphs due to their wide-ranging distribution in commercial, cultural and social settings. One symbol that interests me in particular is the hashtag, because it has been around since people were drawing on cave walls in ancient Europe. The hashtag is one of 32 symbols that were found throughout ancient caves all over the continent. Today the hashtag is one of the most prolific symbols of our time because of its significance and function in social media. It is fascinating that the hashtag transitioned from a basic form of communication in ancient caves to one of the most prevalent technological symbols. It’s hard to say what the original meaning of the hashtag was, but this form has endured time and adopted new meaning over the course of human history. It is not hard to see how contemporary symbols like the Nike swoosh might carry the same potential. 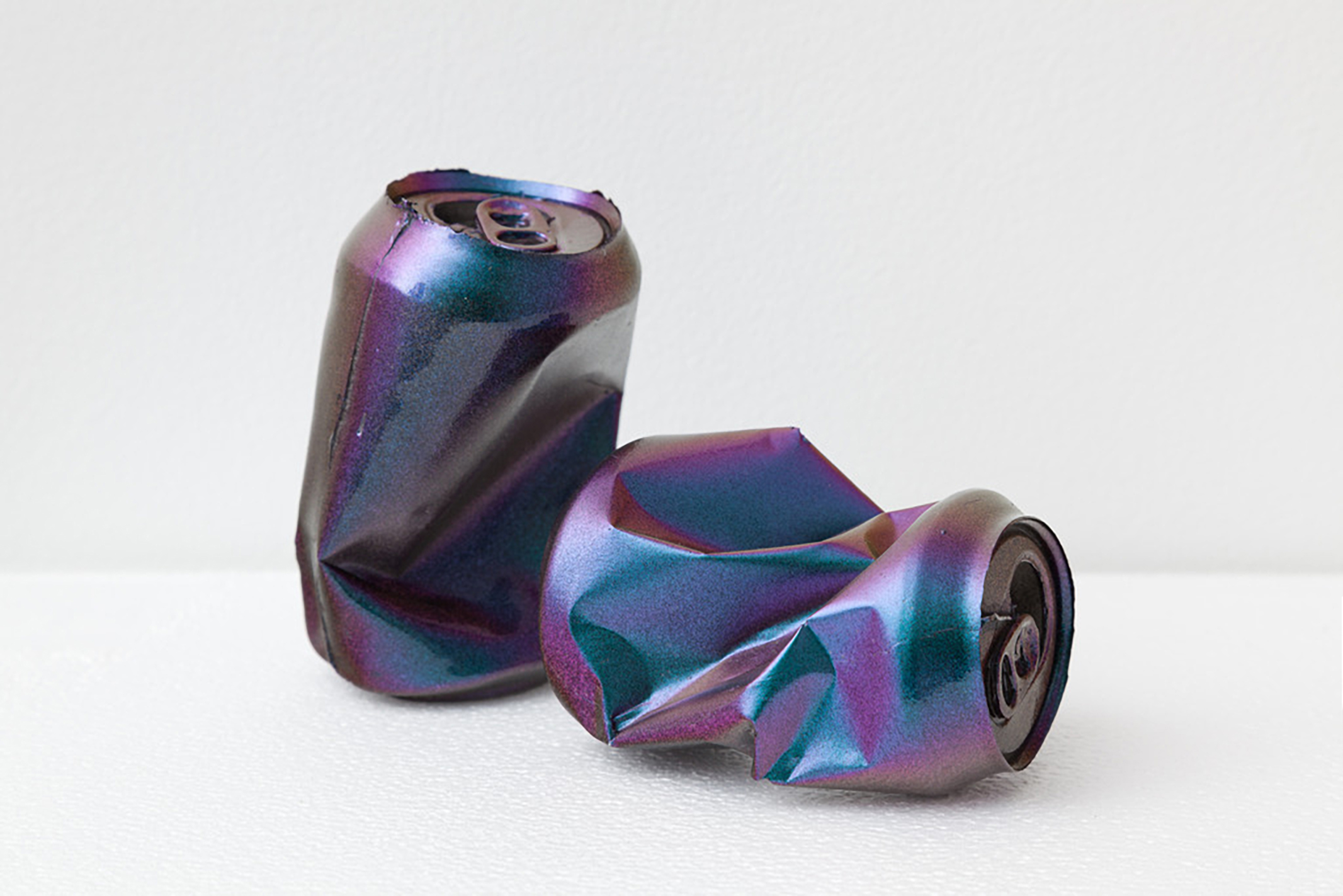 When I teach an introductory art history course I typically assign David Macaulay’s satirical children’s book, the Motel of the Mysteries, in the first week. The book is set in the future and serves as a cautionary tale to students of art history/archeology about how easily one can misinterpret objects of material culture from the past when they are removed from their original context. In the book, mundane and humorous objects are misinterpreted as objects of veneration . . . I couldn’t help but think of that text as we were walking around the space at Gildar Gallery. Among the intrinsically monumental figurative statue, and sculpted mantel, are aluminum cans which you’ve coated with chameleon automotive paint. In consideration of the dazzling surface material you’ve given these objects, and their purposeful placement in close proximity to a classical-looking sculpture, it seems like you’ve set out to give these cans an intentional significance that they don’t typically possess. Am I onto something there? Can you tell me about your intention in placing these cans throughout the gallery?

I am interested in the commonality of aluminum cans and the fact that approximately a half million cans are used a day. This level of production and consumption reminds me of Monte Testaccio. Monte Testaccio was a garbage dump for olive oil vessels that was used for 250 years during the Roman empire. It is a testament to the consumption of olive oil during that period. It is estimated to contain the remains of 50 million vessels. Monte Testaccio is so large that on the surface it now looks like a large hill in the Roman landscape, rising to 115 feet tall. At the current rate of production, it would only take 100 days to create the same amount of aluminum cans. By comparison, aluminum cans might have a similar effect in creating a legacy like Monte Testaccio, scattering future artifacts of our societal consumption across the planet.

When we were walking through the gallery you were talking about concepts of “deep time,” or an allusion to “victory over time,” and the title of your show deals with time, too. The title Man is a Bubble, Time is a Place, to me, evokes the idea of Vanitas and memento mori—symbolic art that serves to remind man of his own mortality. With consideration of concepts of time and mortality, I felt that your use of materials here was particularly savvy in that Styrofoam, or aluminum cans, are inherently disposable consumer materials—we discard everyday objects comprised of aluminum or Styrofoam without a thought. And yet, those objects, particularly those made of Styrofoam will never break down, and are in a sense going to outlive all whom dispose of them. In a way, this material culture, what is basically considered trash, is what will be left of our existence to posterity. Thus, your work gets at this idea of “victory over time” through use of materials as much as it does in the appropriation of a hegemonic classical aesthetic. Are you trying to make any overtly political or poignant statement through the pairing of imagery from antique sculpture with a contemporary material of a mass-produced nature? Is the juxtaposition meant to make the viewer ponder the significance of their own contribution to the infinitely sprawling expanse of history and time?

Political or poignant, I don’t know. For me this exhibition is a way to process the information I have consumed. A lot of that info is about long time arcs and eternity. I have been studying both versions of 2001: Space Odyssey, Timothy Morton’s Hyperobjects, Matthew Arnold’s poem The Future, Karel Dujardin’s painting from 1663 Boy Blowing Soap Bubbles, and theories like Time Dilation. One passage I found particularly moving is from Arthur C. Clarke’s version of 2001: Space Odyssey,

“And somewhere in the shadowy centuries that had gone before they had invented the most essential tool of all, though it could be neither seen nor touched. They had learned to speak, and so had won their first great victory over Time. Now the knowledge of one generation could be handed on to the next, so that each age could profit from those that had gone before.”

The artwork is a more of a manifestation of my thinking process than a prescription for others. I see it as a presentation of information that the viewer can decipher how they see fit. The work in the exhibition isn’t encouraging people to recycle more or drive a Prius, but simply consider existence over a relatively long period of time.