REMEMBERING TO FORGET WITH DIKE BLAIR 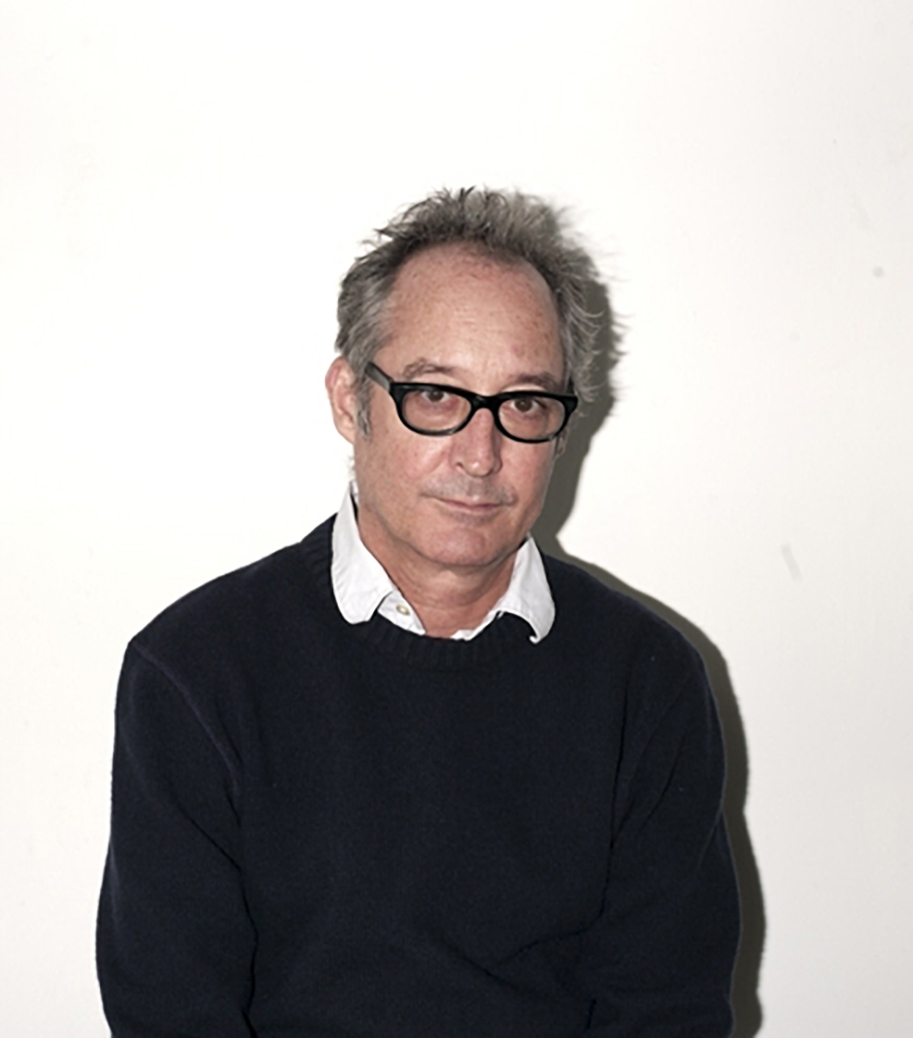 As an artist who started his journey in the 1970s by initially dropping out of college, later earning an MFA from the School of the Art Institute of Chicago, and who became an arts professor at the Rhode Island School of Design and an accomplished writer, Dike Blair has had an opportune view of the contemporary creative landscape for several decades. He has exhibited his paintings and sculptures since the 1980s, and a comprehensive showing of his gouache paintings at Karma Gallery this past spring gave not only the public but also himself a panoramic perspective of how much this one area of his practice developed from 1984 until now. In zingmagazine issue 24, Blair brings together the work of four artists and hones in on their harmonious yet distinguished use of color and form in the arc of abstraction. With his range of experience I was interested in his thoughts about the past, present, and future of art and how he blends together his work in writing, painting, sculpture, and education.

Your project in zingmagazine issue 24, “Ash Ferlito, Steve Keister, Bobbie Oliver, Arlene Shechet,” represents a gathering of four artists whose work you admire and “would look great together.” These are also artists you have worked/exhibited with before, but this is the first time everyone has been involved in a single project together. Any plans to take this from the magazine to the gallery?

I’ve known Steve and Bobbie since the ’70s. Arlene is a prominent artist, but I only got familiar with her work and met her in the last 5 years. Ash was in residence at Skowhegan when I was faculty in 2012. I “curated” this group for Zing (almost 2 years ago) thinking the pages are the show, but it would certainly transpose to an excellent (if I do say so myself) bricks and mortar show. 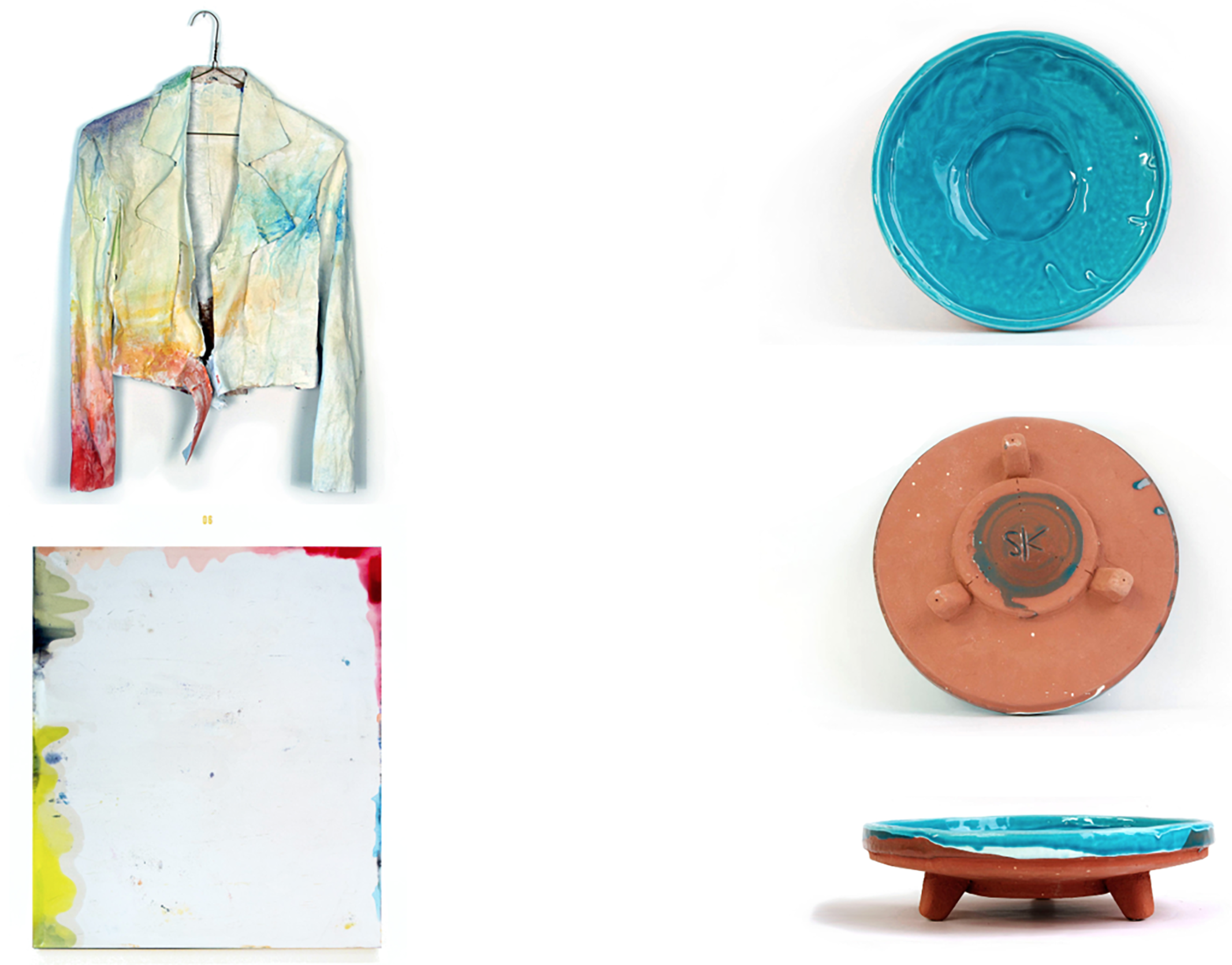 Last year you contributed to Ferlito’s Time Capsule 2014 project at the Marjorie Barrick Museum at the University of Las Vegas, in which all contributors agreed to reconvene in 2044 to open the capsule. It’s a long way off from now, but is there anything you see happening now in the creative world that could have a lasting effect on the future of art’s place in society? What do you anticipate it to be like to open that capsule?

I rather doubt I’ll be alive for the opening of the capsule, but Ash probably will, and I imagine it will be an emotionally rich experience.

As to what’s happening now, culturally, that might shape the world, it would certainly have more to do with technology than things like painting and sculpture. One of the nice things about those latter activities is that they are part of a continuum that evolves, and like evolution, there are periods of accelerated change. I don’t think we’re currently in one of those periods.

Art and technology seems a somewhat different story. In general, since more people have tools and venues to express themselves, it does seem that the web of cultural expression has gotten richer and more complex—more and more domains are created. I’m not certain about the quantity to quality issue . . . bad art can be made in any medium. And it worries me a bit that because of technology we can no longer forget. If one personifies culture, the inability to forget may not be a healthy thing.

That’s interesting you bring up evolution because critic Christian Viveros-Faune made a comment earlier this year saying that the art world is now in the Jurassic period, where teeth and claws are necessary for survival in the financial jungle. He suggests that development in contemporary painting has stalled, though, because artists and the venues that show their work are trying too hard to mimic what was successful in the past to please collectors. Do you think this is partly why painting and sculpture are in a “slow” period? What might be some other potential reasons?

Despite having just done so, I’m hesitant about negative judgments about the state of the art world. It’s so age appropriate for the old guy to grumble about how things were once better. Certainly more artists, particularly young ones, have the opportunity to sustain a practice. I remember other bull market periods when the art world attracted clever, lesser talents who enjoyed success and why not? There will most likely be some kind of correction, but I’m not necessarily wishing for that. 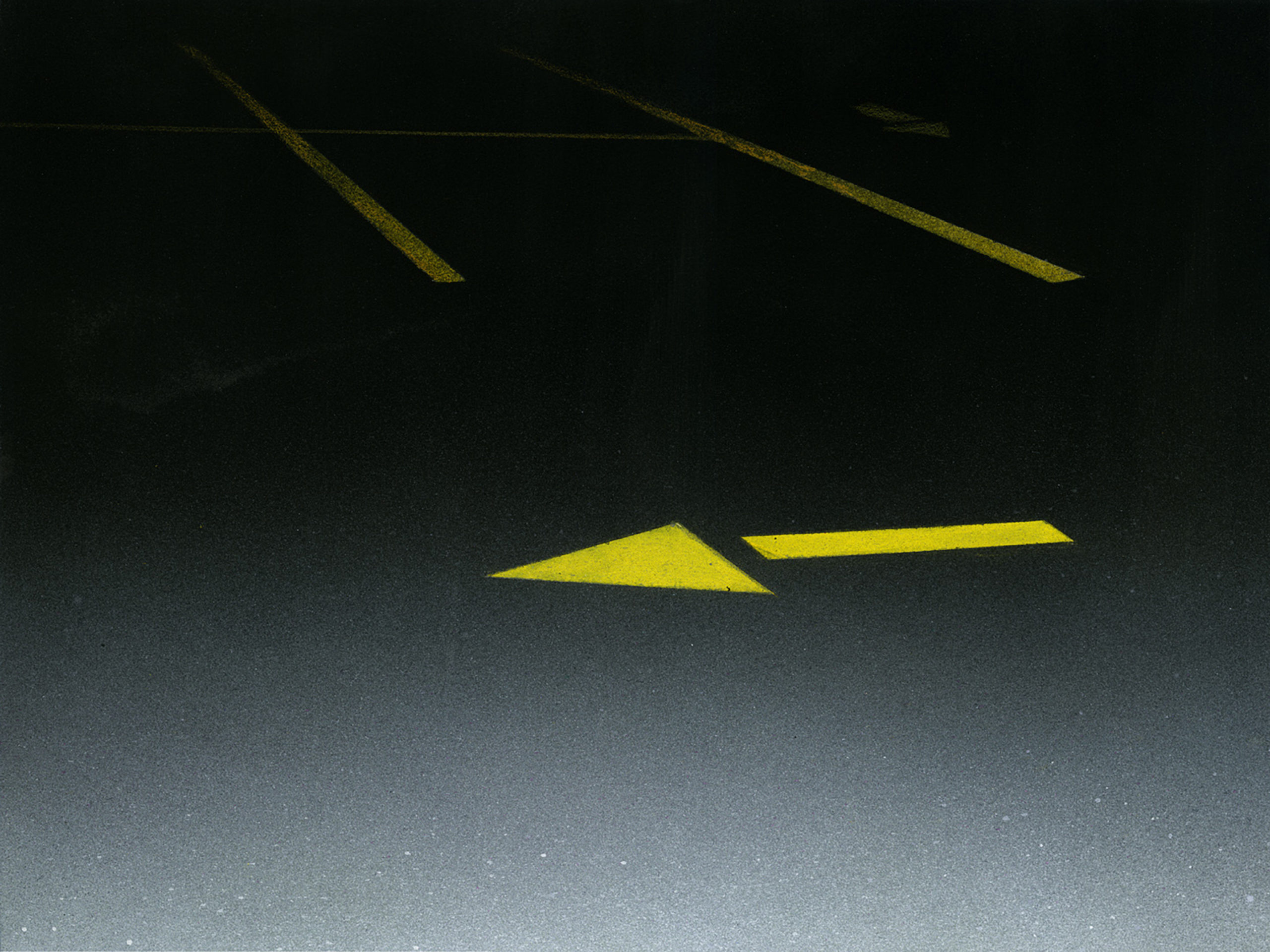 Earlier this year Karma exhibited Gouaches 1984–2015, and, from what I understand, the paintings were exhibited chronologically. What was it like seeing 31 years worth of just your painted work at once?

Yes, chronologically, and I have say, the whole experience was edifying. We organized the show and book in a very few weeks, so almost all of the work was from my studio, including stuff from the mid-80s that had sat on a shelf, untouched for 30 years. Those were covered in dust and because I made the very primitive frames with hot glue, they literally fell apart when I picked them up. Showing those first gouaches was a little difficult for me. I didn’t really know how to paint when I did them; but Brendan Dugan of Karma and Dan Colen, who brought Brendan over to my studio, were so enthusiastic about them I decided to include them. I was a little surprised that people responded so well to them.

Your apprehension showing the early paintings . . . does this relate to your worry about the inability to forget?

Not directly. I think most artists like to think the work they’re currently engaged in is their best. Of course that’s not always true, so one needs to delude oneself.

Your paintings are mostly untitled, except for a few that note a person’s name or a location in parentheses, whereas your sculptures have enigmatic titles like “a seagull suddenly submerges.” How do you name an artwork?

I think the representational don’t need titles. It’s a cocktail, or a sunset, or something. The sculpture is more enigmatic and something suggestive can encourage poetic readings.

How do you balance your time between making paintings and making sculptures? Do you work in the two media simultaneously or focus more on one and then switch after a while?

I have two studios. A small one in the City that is only appropriate for the small paintings on paper, and a larger one upstate where I can work on sculpture and other large projects. So I tend to work on sculpture in the summer, and paintings during the school year. 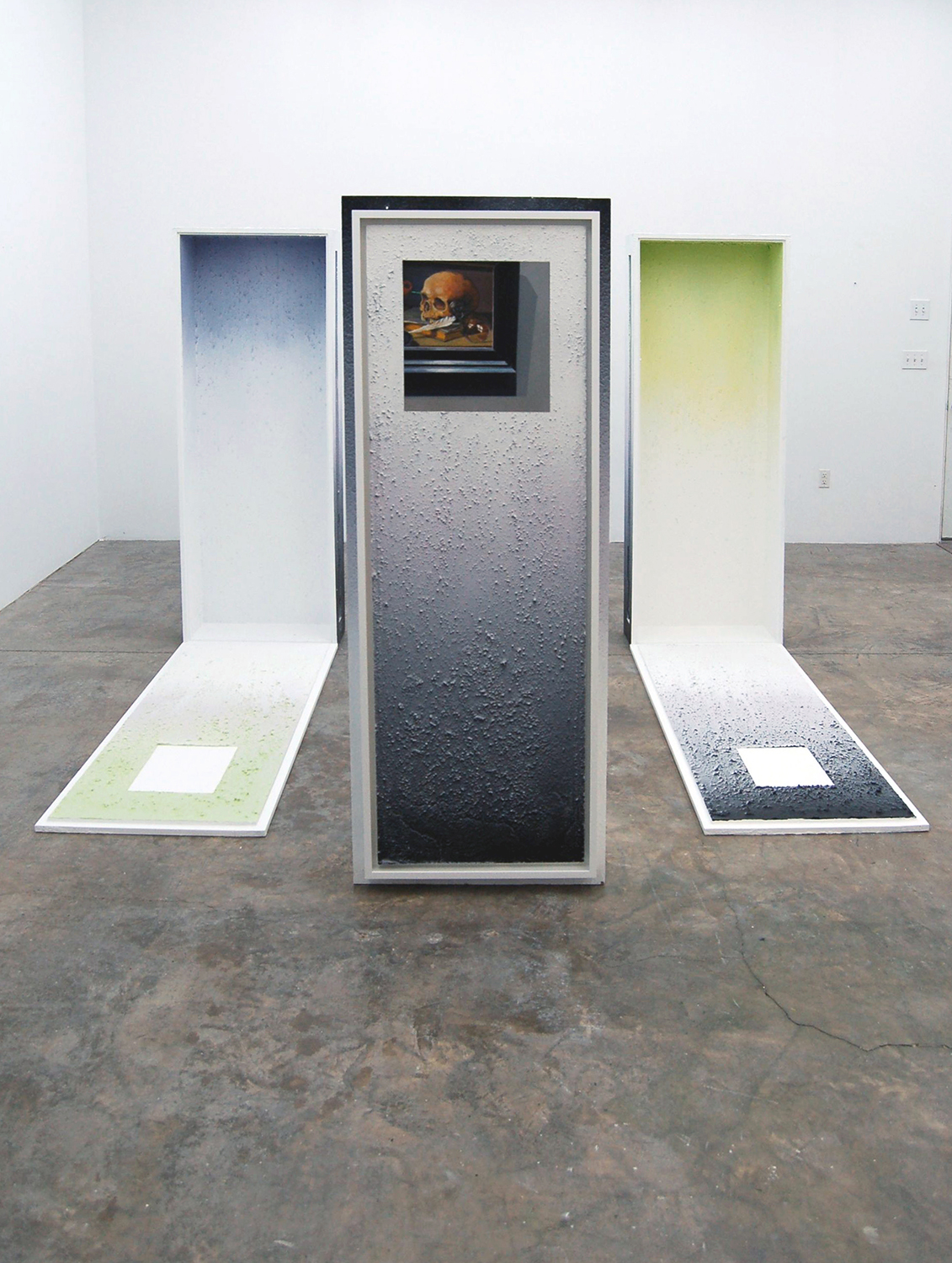 What are some of your favorite galleries/museums/art venues? Any recent exhibitions that really caught your eye?

The Noguchi Museum in Queens is probably my favorite museum. He’s one of my favorite 20th century artists, and the space is serene. I saw an exhibition in LA of Archibald Motley’s paintings that blew my mind. Somehow I was ignorant of his work and it’s amazing. That same show, I think, will travel to the Whitney this fall.

You attended a number of different art schools in the 1970s and are currently a painting professor and Senior Critic at the Rhode Island School of Design. How would you compare what art school is like now to when you were a student?

Schools and the art world were obviously very different back then. Of course the scale of everything was smaller, and theory wasn’t so predominant. Professors were generally less demanding, and some (and I emphasize, only some) of them considered teaching as something like a professional grant rather than a job. I demand so much more of my students, namely attendance, than was demanded of me. I’d also note that I would hate to have had me as a student. I would have to slap me down.

I attended a talk earlier this year with a group of artists who founded some of the first DIY art spaces in Denver in the ‘70s, and they discussed how today’s young artists are trying to make art as a career rather than creating out of passion. Any thoughts on this statement and it how might relate to the shift in how schools/the art world operates?

Well, I wanted an art career when I was in school in the early ’70s, also in Colorado. I think one’s approach to making art constantly changes over a lifetime. In my case my sense of accomplishment, or lack of it, was probably more of an external thing when I was young, and now it’s more internal.

You’ve conducted and been the subject of many interviews. What do you think necessitates a good interview, from both the interviewer and the interviewee?

One of the things I most liked about interviewing people was the preparatory homework. Of course 95% of that homework doesn’t get touched in the interview, but it’s great to get outside of oneself and really think about the subject. I think in my early interviews I wanted to demonstrate to the interviewee, almost always a person I admired, that I was smart. Well, I’m not that smart and I realized the interviews were often better when I didn’t try to be.

When interviewed, I try to be somewhat honest.

How do your practices in art and writing inform one another?

Well, when an artist writes, inevitably there’s a two-way bleed. However, in the mid-’90s I made a very conscious effort to segregate the studio work from the writing. I didn’t want the art to explain itself and I eschewed starting a work with a concept. I think the art I made might be difficult to write about. I’m certainly not prescribing that approach and it seems a great deal of successful contemporary stuff starts with a concept that’s relatively easy to translate into words.

Christopher K. Ho was asked which art critics have been influential to him, and which artists who write or engage in some form of criticism he respects. He named you, among others, in his response, and I’d like to redirect that question back to you.

Thanks for that link. Chris is a friend and colleague and I’m embarrassed I didn’t even know about Hirsch E.P. Rothko. Chris is brilliant but not one to hoist his own petard. I just ordered it.

I really don’t read much art criticism and mostly read fiction. Actually, I don’t even read much anymore and mostly listen to audio books. I would like to echo Chris in my admiration for Roger White, I loved his book, The Contemporaries, and with Dushko Petrovich, he creates Paper Monument, one of the only art magazines I read. Like Chris, I admire Rosalind Krauss, however I prefer journalistic art writing to more critical stuff. Dave Hickey’s books always grab me, and I just finished Greil Marcus’s, The History of Rock ‘n’ Roll in Ten Songs…really great. (Actually, listened to that, and Henry Rollins’s read it really well.) 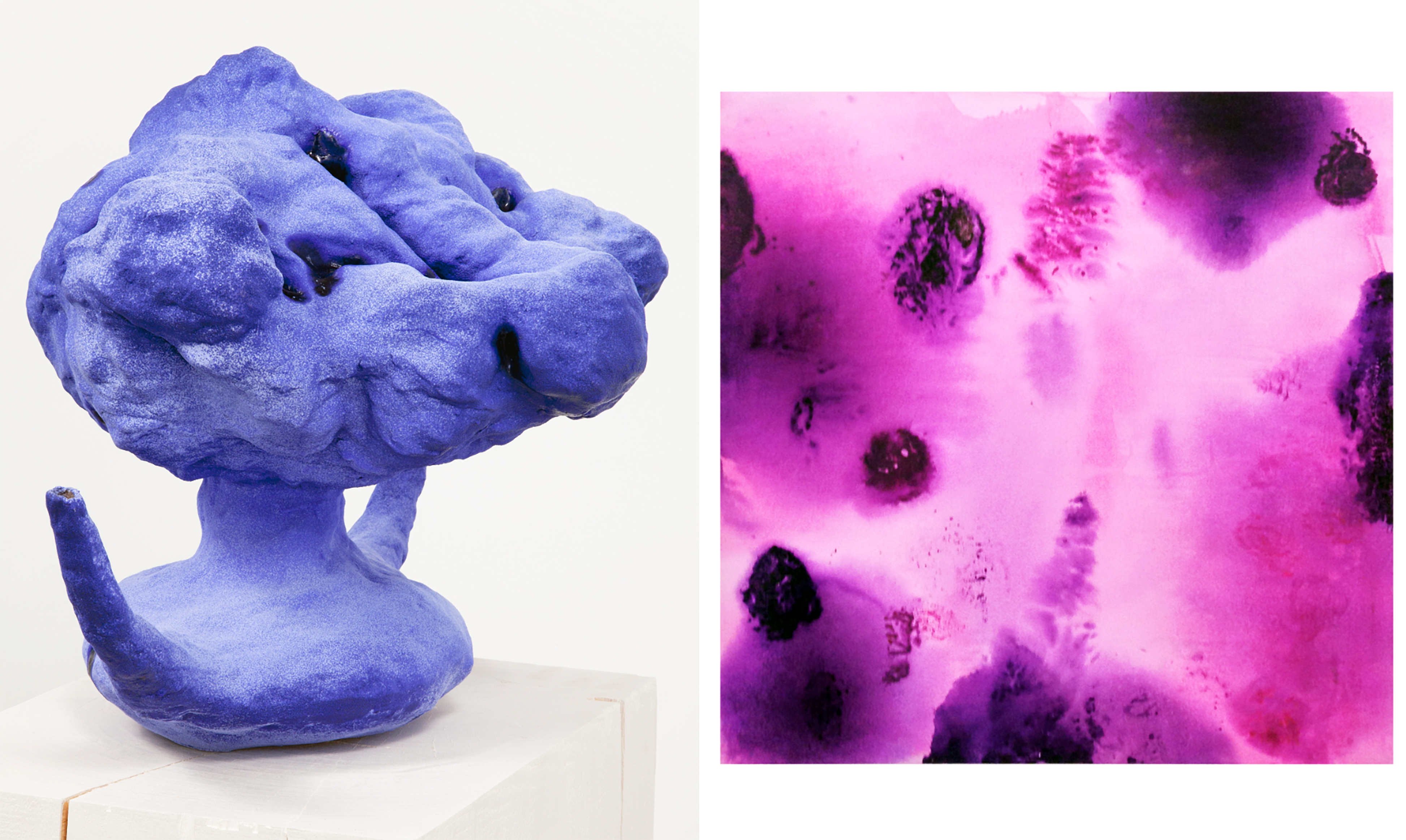 What else are you listening to, looking at, or reading to fuel (or perhaps escape from) your work?

The NFL season has just started. That’s an escape. I just heard the music on Jeff Rian’s CD that’s included in this issue of Zing. He’s an old friend and the music is really beautiful.

Do you have projects, exhibitions, or anything else coming up on the horizon you’d like to share?

I’m really excited to be doing a show at the Vienna Secession early in 2016. It will be paintings and sculpture about windows, walls, floors and doors.