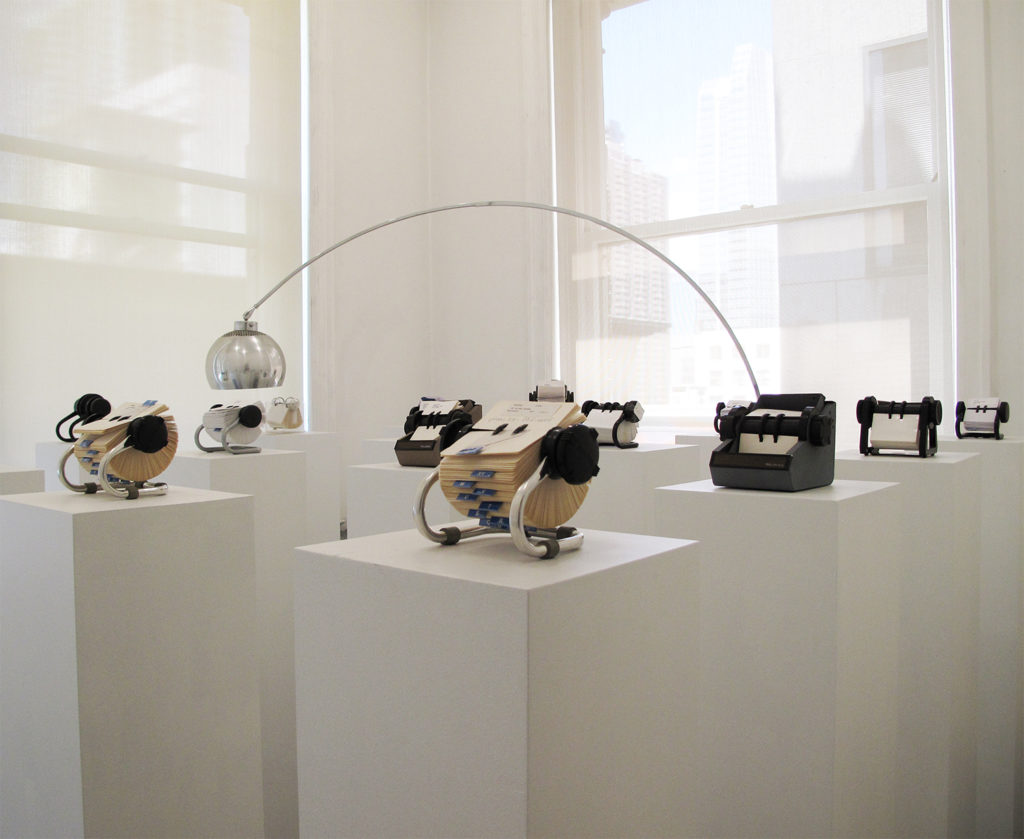 Devon Dikeou’s retrospective “Mid-Career Smear” opened at the Dikeou Collection, Denver, in February 2020. Soon after the COVID-19 pandemic forced art venues around the world to close their doors and postpone their programs. With the exhibition on pause, we reflect on the background and ongoing context of the show and work included.

What does the “Mid-Career Smear,” a retrospective, mean to you as an artist at this point in your career?

Hmmmmmm well given the circumstances it’s hard to speak on MCS. My hope is sometime in the future we can all get out to see all the art that is out there on view (but closed at this time) and then enjoy, wonder, be inspired, because at this time it’s needed more than ever. We are living in our version of the bubonic plague . . . let’s try to think of how art influences us even if from centuries, generations before, or more currently . . . there’s Bruegel’s “The Triumph of Death”. . . which fills the well of what life might have been like. . . even as it was painted later than the actual pandemic. Other artworks in the 20th century offer a different take. Rothko’s chapel in De Menil Museum campus . . . Rothko’s architecture and paintings in the chapel reflect that along with the monumental Barnett Newman sculpture, “Broken Obelisk,” that flanks the chapel structure—all non-denominational places of solace, worship, meditation. And then there are Norman Rockwell’s Saturday Evening Post magazine covers during the Great Depression and WWII, a great example, “The Four Freedoms.” Another seminal piece is Robert Indiana’s “LOVE” made in 1967 during the Vietnam War. . . Much less Keith Haring’s AIDS awareness posters and paintings, during the AIDS epidemic: “IGNORANCE=FEAR.” Art fills a special place. A comfort, a critique, an illustration, a reflection of life’s strife, as well as moments of jubilation. My work of 30 years gets nowhere near all those aspirations but tries very hard to touch them. 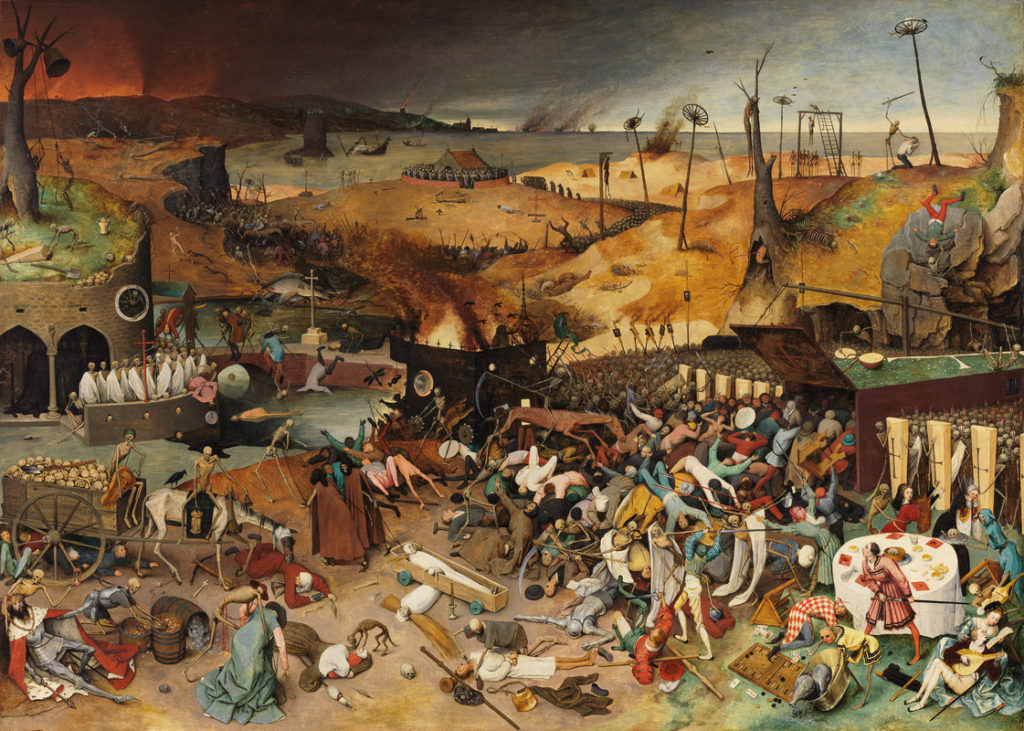 Pieter Bruegel the Elder, The Triumph of Death, c. 1562 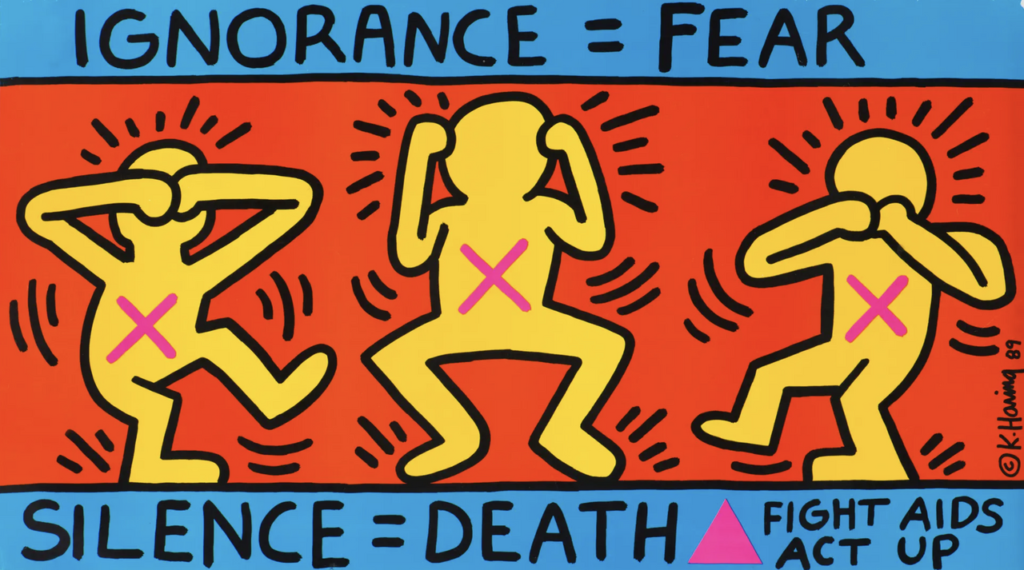 While you were born and raised in Colorado, most of your development and exhibiting as a visual artist has occurred elsewhere, with perhaps your most formative period being in New York City during the 1980s and 1990s. Can you speak about this and what it means to show a deep survey of your work in Denver to a mostly Coloradan audience?

Well Colorado and Denver, these places, were my first tutorial. Really the Denver Art Museum and Denver Public Library were the retreats I ran too, á la Claudia in the Mixed Up Files of Mrs Basil E Frankweiler. The library is where I read that book, DAM is where I saw all the art I could—from Armand Hammer’s exquisite soup tureen collection to pop paintings in the DAM Bonfils Gallery including a mesmerizing drugstore window by Richard Estes. One show is about objects, soup tureens, which are magical in a Maurice Merleau-Ponty way, even if you don’t know phenomenology. The other drew me into a window, which paintings are, a painterly window, and as realistic as can be imagined in content. What are windows, of course they are also mirrors. Manet teaches us with that in “The Bar at the Folies Bergere” and the Velvet Underground with their song “I’ll Be Your Mirror,” inspired by Warhol, then appropriated by Nan Goldin’s ‘90s slide installation of the same title. These windows, mirrors, and objects: they are “The Lion, The Witch, and the Wardrobe” given and exposed to just one among many youngsters in Denver in the only Gio Ponti building in America and in my case the Eugene Field Library. The Ponti BTW is where I first applied for a group show with “old school” slides. The curators were Deborah Butterfield, Peter Plagens, and Marcia Tucker. My piece “Security Secure” was selected for the show “Colorado 1990.” Weirdly, the best thing happened . . . during the opening the lighting staff left the cherry picker in front of my installation of gates and glass, not realizing my installation was a part of the exhibition. Inbetween that gate and glass installation . . . I also ended up with a few Encyclopedia Brown books . . . all overdue. Another inbetween. 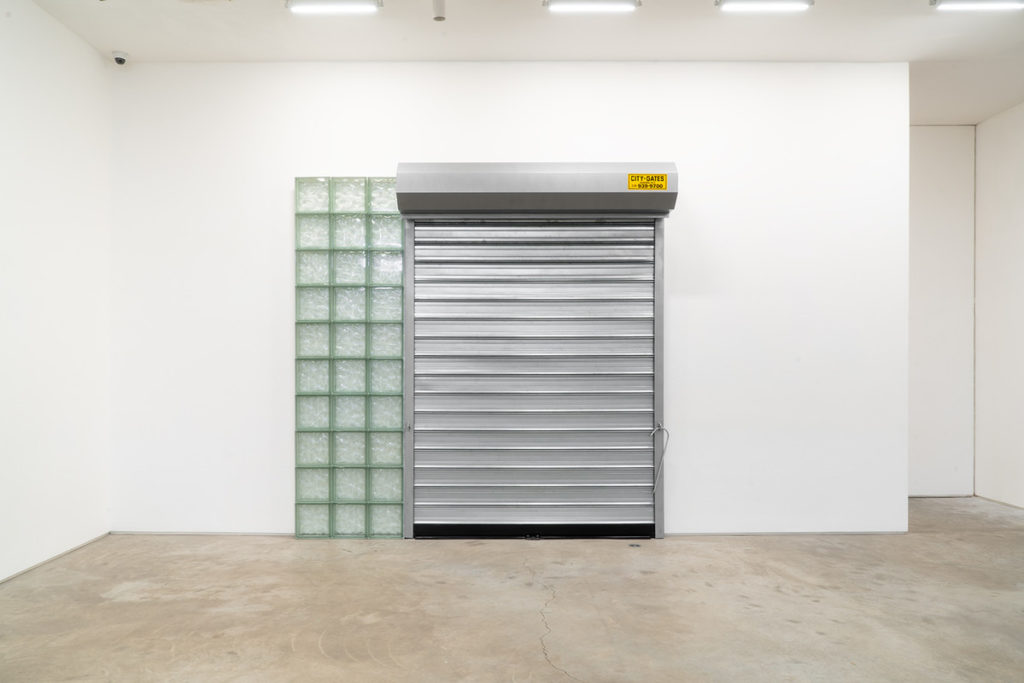 As a collector I know you value an individual’s ability to view an artwork over a period of time and see how their relationship to the work changes—an essential notion to the Dikeou Collection. As an artist revisiting your own earlier artworks, did you find that you relate to them differently now? Any specific examples you can offer?

For sure. But also not simply because of MCS. As a publisher/editor of zingmagazine and by extension a collector with the Dikeou Collection, both kinda took over. My art practice lost its ummmph, just rested. I saw to those other two uses of my energy as part of my practice more thoroughly. And they were well-tended. So there were many zing projects that opened the way to viewing so many artists and other creatives. And the Dikeou Collection like zing was a platform to share and I hope we have . . . From time to time during this less productive period of my art practice, cause I’m such a weird archiver I’d look at some of my work from years past in the binders above the computer. Looking at images of work reminded me of my sometimes prescient ideas as a practicing artist then, all in hibernation. In those moments I was reacquainted with old friends and that re-immersed me in their boldness, i.e. the “Here Is New York” security gate series, most recently shown at James Fuentes, as well as many little bits that at the time I thought were supremely unmonumental . . . Surprisingly, little turns out to be big, just like in Alice in Wonderland. The Rolodexes are a crowd favorite . . . they almost were not included.

Do you identify primarily as an artist? If so, how do you believe this has affected your approach as a publisher and a collector?

Yes and no. It’s a trifecta, I think. As an artist in the mid-late ‘80s and early ‘90s I’d visit and do the gallery tour. Sometimes alone sometimes with others. Then you’d gobble up the Friday NYT and the Wednesday Village Voice. I remember a quote from VV somewhere along there, that went like this . . . “The Cindy Sherman show at Metro Pictures is like shopping at Bergdorf’s at Christmas. At Paula Cooper, the Jennifer Bartlet show which has orange painted chairs and other objects in front of the paintings, a collector was heard saying as the dealer left the room, ‘If we buy it, can we put the chair in the closet’”. It’s funny as an artist to hear or read those words. And then as always my thoughts kinda come from words, and my work didn’t really get much written attention so I started writing my own. You’d see all this amazing work of your contemporaries and why their work wasn’t being shown or collected, much less published. And that’s the genesis of both my publishing and collecting instincts. Hence both zingmagazine and the Dikeou Collection, which by the way, along with just being artist, editing is perhaps the most powerful tool one can possess in all three practices. 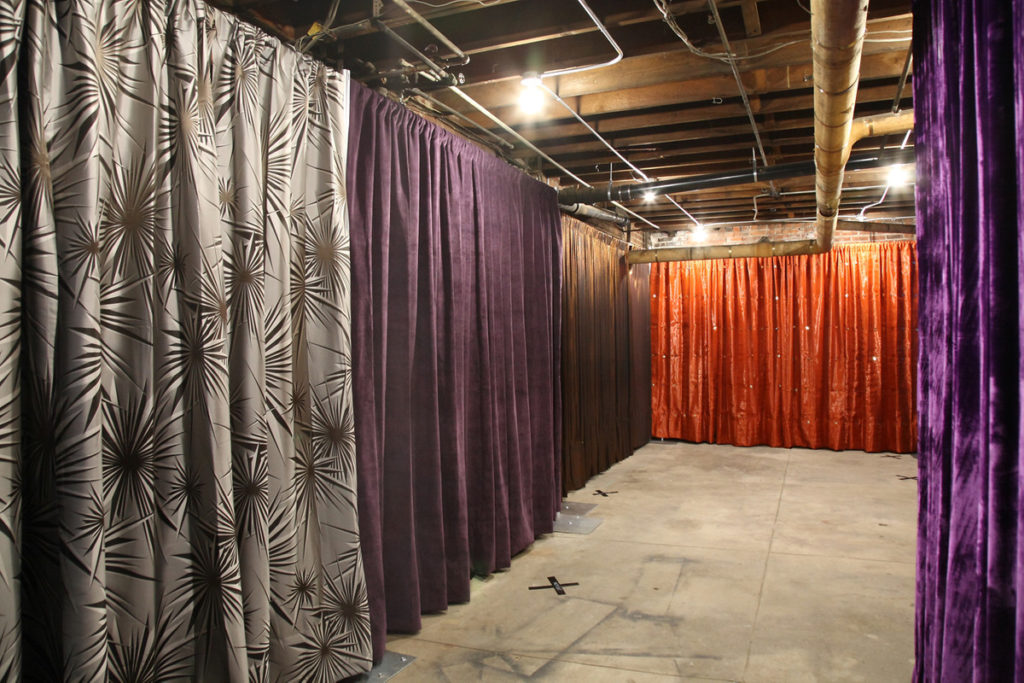 Who/what have been your greatest influences over the course of your career? And how have they, if at all, influenced “Mid-Career Smear”?

I have a daily diet of 24-hour TV, but really it’s the same as everyone else. Learning, looking, curiosity, inspiration. No matter where these impulses come from . . . but most likely they come from close to home. For me that would be from my mother LSD and her friend Frank for decor and fashion, both of which are a huge part of my practice. Don’t think of decor and fashion as the frill but the set. It sets you inbetween you and the people you meet and see. My father—space and the relation to it, what a space like a parking lot could mean, and understanding what that represents . . . something inbetween big and small, commercial and other. Brother, it’s belonging and knowing you always will, cause often there are cracks. My fellow, who helps me execute, is out front when I hold back. There are many more: the homeless that pick you up off the street after tripping, other artists that feed you ideas and suggestions, edits you may not have considered. There are the teachers, Wendy Edwards, at Brown University, Ursula Von Rydingsvard at The School of Visual Arts, Mrs Emery’s after-school art at Graland, Mr Burrows at KDCD, all segues and that’s not all. . . There’s the professional curator who directs and guides and intuits your vision to fruition . . . not an easy task, and one that has taken over seven years and lots of different considerations, by Cortney Lane Stell, and she was the inbetween, behind the curtain . . . However, it’s always, always a new thing, an old thing each day . . . sometimes it’s just sleep. And sleep is something to try to look forward to . . . another inbetween space . . . be brightened because you’ve found it and surrendered if even in a small repetitive way, which is the inbetween of everyday . . . sleeping and waking.