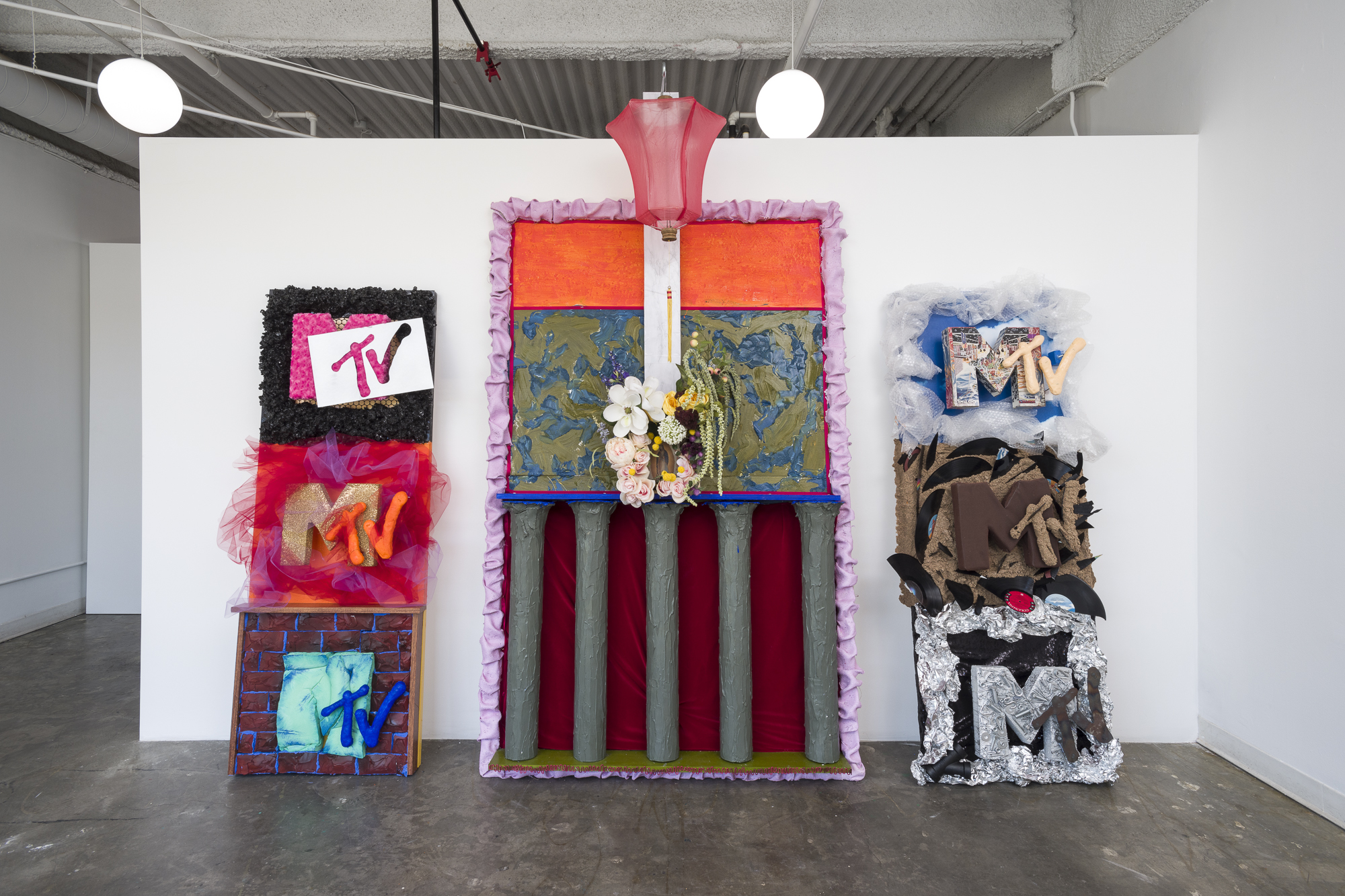 
How do you feel showing one of your earliest pieces, made in 1986, for a third time? You also included it in your retrospective in Denver at the Dikeou Collection.

Showing the same work three times, MTV Altarpiece (1986 ongoing) and one image from Please (2011 ongoing) at Foyer-LA is not unusual and is part of my and many other artists practice and process, hence the “ongoing” cited in the dates in my titles. The ongoing process allows for reconsideration, re-examination . . . Originally, MTV Altarpiece was created for my thesis show at Brown and at that time MTV was at the nexus of its cultural influence . . . videos were no longer a visual illustration of a popular song featuring a band . . . The video WAS the song . . . This medium changed how music—an aural medium of music listening became a visual medium, one of watching, and how MTV profligated that change . . . And beyond musically. It was the cultural zeitgeist, the channel that caught and channeled literally how we consume culture—music and otherwise. MTV, the logo of certain period of time, was the sign, the symbol, the in-between platform representing music and all that comes with music as a visual metaphor. Now that sign, MTV, and that logo, that thing we think of associated with the letters, means different and other things, but still remains a sign, maybe even more of a sign. And the audiences have culturally shifted, and that recognition may land in the realm of nostalgia . . . It may land in the realm of MTV’s own cultural prescience.

Perhaps that is now why two different curators were so attracted to MTV . . . Cortney Lane Stell, the curator of my retrospective, Mid-Career Smear, at The Dikeou Collection, was insistent that MTV Altarpiece be recreated . . . So it was, and is displayed at The Dikeou Collection Pop-up. The Pop-up is in the old abandoned Jerry’s Record Shop on East Colfax . . . And Jerry’s was the epicenter of the Denver Music scene. Now it is a space which houses a collection of approximately 15,000 albums and is replete with all the trappings of the Jerry’s Record Shop scene, grunge, graffiti, vinyl . . . MTV fit in perfectly. Connie Walsh, an artist/curator happened to be in town and she visited MCS, keen on visiting both spaces (California and Colfax), despite her small pocket of time. In fact, I think she’s one of the few who saw both iterations of MCS at the time. Anyway, she has created a vibrant space in LA adjacent to her studio called Foyer-LA. Foyer, by definition is the room before, the room you enter, the segue that leads you in. As an exhibition space she gives that space a voice and gives the audience a preview . . . MTV found another lifeline in her space . . . So the three, 1st destroyed because it was held together with a glue gun, a tape gun, and staple gun, shown to a small audience in Providence in 1986, the second recreated for a thirty plus year career in Denver, the third a splash in Foyer-LA . . . And that last splash also includes a diminutive photo from my exhibition “Please”. . . A still life of a bouquet of flowers (Lilas et Roses, 2011 ongoing) after a series that Manet painted while dying of syphilis . . . A swan song . . . harkening back the heart of the altarpiece, the flowers in the MTV Altarpiece.

Since we are talking about your MTV Altarpiece, we must talk about the most effective distribution of music and the revolution music videos brought to people around the world. Do you think that the music got any better—we know for sure more people got richer?

I am not really much of a music anything so my reflections on it as an industry/critic won’t give much insight to anyone. The distribution probably worked like the radio . . . payola . . . But I am even less equipped to comment on that . . . I’d wanna “phone a friend” and that friend of a friend would be Sasha Frere-Jones. Beyond that, the reason I was so fascinated and still why the work holds resonance is because MTV has become more than a platform, it has become a sign . . . It is a world recognized brand like Nike, Coca-Cola, or . . . Apple. It changed our lives and how information is processed. MTV brought us more than just music . . . The first Reality TV program, The Real World, and the first death of an “Reality TV Actor” on The Real World of AIDS—the Young Vote became an important recognizable voting block leading to the Clinton Presidency, to name a few of MTV’s cultural implications . . . Whether MTV does so now is . . . Well their logo and award statue reached for the moon and literally the MTV logo has a space ship taking off as its electronic jingle pulses . . . Branson, Bezos, and Musk make good on that space bet . . .

What is your current taste in music (and why not include art in this question) and how do you think music and art and their distribution look in another 35 years?

Someone referred to a mountain radio station here in Colorado as the ’80s prom night station . . . Music does play a part necessarily in the reading of the artwork, but maybe so do John Hughes movie soundtracks . . . Which basically a Hughes movie is an MTV movie . . . In that vein, I made a playlist for the MCS, choosing songs for each piece in the exhibition, that in some sense, reflect the artwork. MTV Altarpiece’s song is “Pour Some Sugar on Me” the Def Leppard ballad that aired based on paid, call in, phone requests every day for a record run in the ’80s—all before Carson Daly’s Total Request Live . . . You access the MCS songs with your iPhone . . . It’s free.

I am curious about the aesthetic of MTV Altarpiece. To me, compared your other work, it looks really “trashy” and punk and incorporates a lot of the cultural tokens over which the American Culture landscape is still fighting. In particular when it comes to question of the incorporation of signifiers that some so-called minority immigrant communities want to claim solely for themselves?

MTV Altarpiece is not very well put together . . . At the time there was no conservation term for it, like “inherent vice,” in which the material something is made of, by its own materiality breaks down the whole conservation process and the piece itself . . . Like Lizzi Bougatsos’s ice sculpture (Self Portrait, 2012, The Dikeou Collection) . . . MTV is thrown together, but it is also reflective of the punk, trashy way graphics, videos, art, music were visually implemented in the ’80s, using color xeroxes, quick cuts, colors from spray cans . . . Packing materials . . . So yes, it’s look must seem more trashy, punk . . . I am not interested by a white cube aesthetic and throughout all spaces I exhibit, I try to challenge that aesthetic. In the California St space (MCS) all the holes in the walls of the Dikeou Collection remain, as ghosts of what’s been before, as do certain Collection pieces. In the Pop-up—that it is a record store reflects very much the place and atmosphere of MTV. At Foyer-LA, that it is an artist run space and grew out of an artist’s studio, and is a resting place to exhibit art in proximity to the studio reflects this idea, of the breakdown of the white cube, and makes and shakes ideas of what and where a gallery is and can be . . . It makes sense that this breakdown happens outside of New York, as historically this breakdown happens outside the epicenter and that it reaches more than just the art community . . . I think more along ideas of flatness, than in terms of tribe . . . How that translates among diverse communities and markets becomes more about fighting and/or absorbing the natural market mechanisms. The minute something is free, the market finds new ways to commodify it . . . Napster and Video Art in their initial stages, and more contemporaneously streaming and NFTs . . . Initially streaming was free TV and digital art, free art . . . Now there are streaming subscriptions for CNN and Discovery . . . So you pay for and get more specific and curated streamed content, or you pay for a specific moment, a zeitgeist moment, in an explosively priced NFT . . . Come to think of it CNN and MTV originally began as subscriptions in the ’80s . . . Buyers and subscribers beware.

I am an artist who does so so many things, I have invested nearly all my life in questions of class and race and politics and I still wonder who should say what to whom and under what conditions . . . And with a body of work to reflect that as varied as performance, videos, paintings, drawings, fashion lines, ceramics, multiple web sites, I needless to say, have very little means to even store a piece like this over such a lengthy period of time. Could you tell me how you did it ? Did you simply remake it, redo it from scratch or could you just pull it out of storage?