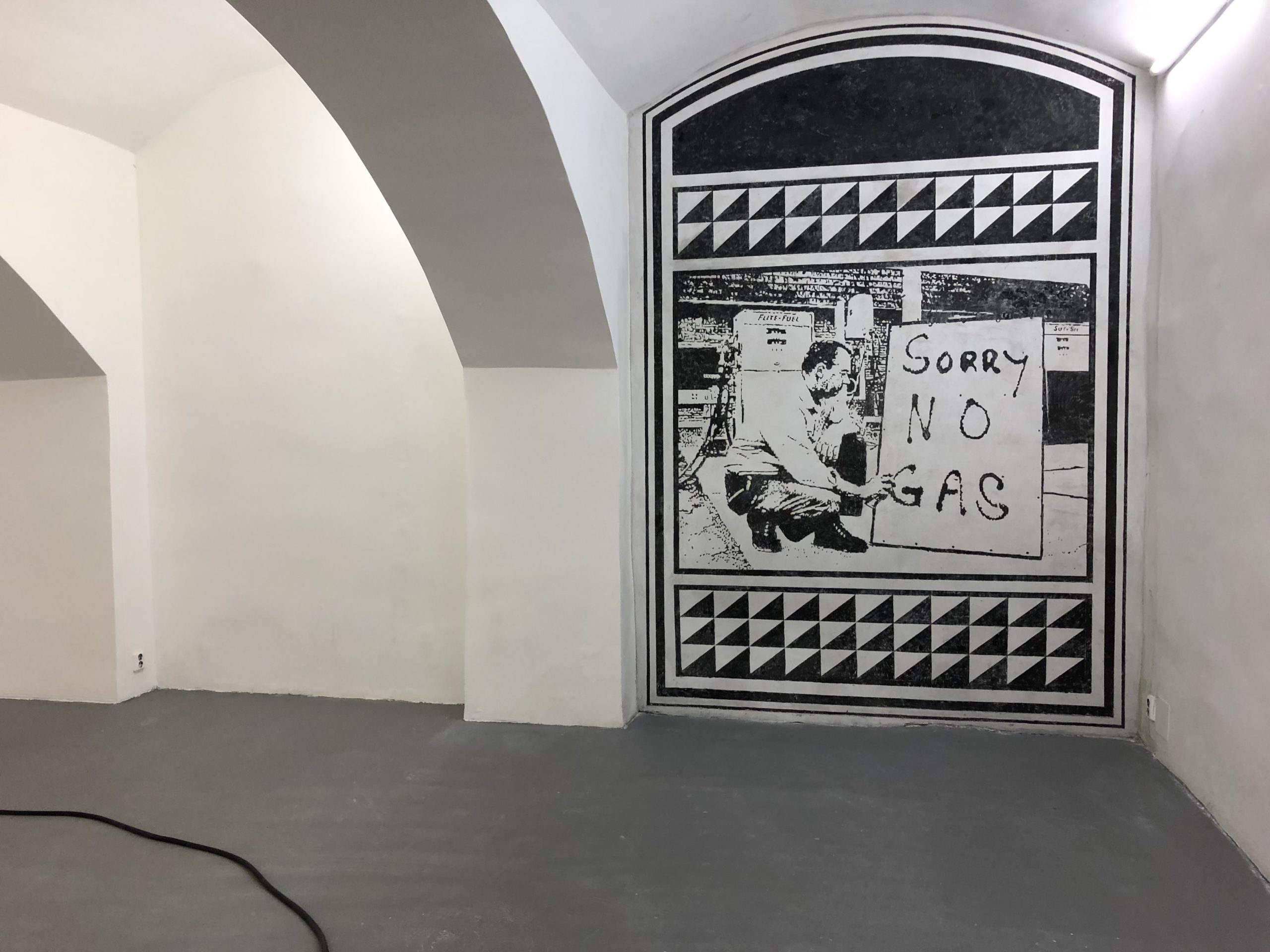 For the past two months, Devon Dikeou has been in Prague, Czech Republic, an artist-in-residence at Centre for Contemporary Art FUTURA as part of Black Cube Nomadic Museum’s fellowship program. Curated by Black Cube’s Cortney Lane Stell, Dikeou’s exhibition Tricia Nixon: Summer of 1973 captures the essence of America during the 1970s, while drawing parallels to present-day crises and politics in the U.S. Pulling from public record and personal memory of the era, Dikeou tells the backstories of the various elements that comprise the installation and how it echoes a time from decades past as well as reflects what is happening now in our current time. Tricia Nixon: Summer of 1973 is on view at FUTURA through September 16, 2018.

This is your second artist residency, the first one being at Artpace in San Antonio in 2011. What do you value the most from the residency experience?

Well residencies often imply studio. My studio is wherever I am—be that a city, a country, a locale, a room, an exhibition space, and the atmosphere—music, TV, cafés, bars, museums, other artists’ studios, and what you sense there . . . but I do come to all things—exhibitions, residencies, fairs, magazine projects, with my thoughts pretty worked out. The fun and beauty, and I guess value is when they—those thoughts—change . . . What happened in Prague is that once I got to Futura . . . There were extra exhibition spaces available, and the idea of commingling the spaces somehow became attractive, joining them in a way . . . And as my work is really about finding these pockets of in-between, the meandering spaces of Futura were just delicious . . . How could I make them more related beyond just ideas . . .

And beyond that initial response . . . I want to say . . . There’s this great story of Joan Rivers . . . She used to archive all her jokes in an old-fashioned library card catalogue manner. So, she had categories and alphabetized the jokes, and when she needed one, all she had to do was consult this card catalogue—and as time went on, this file became a massive archive . . . A whole room with the little wooden drawers, and 4” x 6” cards full of jokes for when she didn’t have one. And instead of a search engine, she searched her own search engine.

So, as I was arriving in Prague, I was looking at old legal pads which is my archive system of pieces, and I came across a piece which I thought fit really nicely with the “Tricia Nixon: Summer of 1973.” I found “Ring My Bell” (1991 Ongoing). It relates to the gas crisis of ‘73, the lines, the idea of full-service, consumption, and found object, relational aesthetics ideas of activation, and minimal ideas of composition, line, presence, and lack thereof. It seemed like a perfect pairing. And I began to connect the spaces in Futura, not just with ideas but with literal hoses, anchors, and bells—which is how “Ring My Bell” exits as a functioning gas station bell . . . Actually, back then we used to call them “Service Stations,” the attendants come to service you once the bell has rung.

Also, something happens when you get out of your element, in a residency . . . It’s why I love visiting all 17 curatorial departments of the MET . . . Or any encyclopedic museum . . . There is something inspiring about things you don’t know that well, but can appreciate, and if that can enter your practice, so much the better. In Prague, just wandering around I became reintroduced to an old technique called Sgrafitto. I just loved it, seeing it again . . . It’s wood block printing meets fresco, meets batik, meets decoration, meets architecture, the etymology of which produced the modern practice and word, graffiti. I thought why not reverse the process and use an old technique to create something nostalgic even in our contemporary mindset of 2018, from 1973, and convey something, not just technique or decor, that relates to our own encyclopedia of reference. So now we a have piece made in a residency that may or may not have ever come to fruition without the lovely coincidence/gift of Prague, Futura/Black Cube Residency.

The exhibition centers around the U.S. oil crisis of 1973, specifically the then-president’s daughter Tricia Nixon’s frivolous behavior during this time when the rest of the nation was subjected to rationing and conservation of resources. The installation “Summer of 1973: Tricia Nixon” features a faux fire element with marble fireplace, a modern-day air conditioner, and vintage Mickey Mouse clock radio among other objects reminiscent of that time and now. What are the backstories to the different elements of the exhibition?

I live in a loft where the heat is super old school. It’s steam, no control, can’t turn it up, can’t turn it down. When it’s hot you’re in a Russian bath, if it’s freezing, then of course it doesn’t work, and there’s no adjustment available either way. And it screams literally every time it fires up . . . Sounds like someone is breaking in . . . Nothing to be done. There is this tiny room in the loft that I like to go to and just think . . . Virginia Woolf, “Room of One’s Own” style, and sort out the start of the day . . . There I am in this blank white room with a somewhat modern window air conditioner with an old-fashioned steam heater painted silver below it. The heater starts its initial wheezing, graduates to clanking, and bangs out what sounds like Beethoven No. 9. As I was sitting there, in this tiny room, with these two elements of heat and coolness, I was reminded of that 1973 summer—old enough then to comprehend what was happening—and bling: Tricia Nixon. Which brings us to this story that I recall of Tricia turning up the air conditioner in the White House so high so that she could have a fire in one of those over-the-top fireplaces, all in the heat of a D.C. summer. Maybe it’s urban myth, but the craziness of the gesture has somehow stuck with me. And in the spirit of “if these rooms could speak,” from the cranky old loft that spoke to me that morning and reminded me of what may or may not have happened in the White House, this installation germinated . . . So we have a bricolage of White House rooms with replication of different elements from several, essentially a working fireplace, a modern air conditioner, and a clock radio from 1973, which is the radio I listened to every night before going to sleep and woke up to get ready for school. It was a Disney clock radio, and I just a bit too old to really have it, but the dial was a 3-D Mickey, and even though he’s not even my favorite character, I love it dearly both then and today plus it functions! That analog clock radio in the installation serves as the platform from which I learned about Tricia Nixon’s fireplace/air conditioner misstep, and now in our digital age plays CBS news clips from the summer in ’73, including those clips reporting on Watergate, the Pentagon Papers, the sounds of the summer in rock -n- roll, and advertisements. These elements pull the viewer into a new, in-between space, the hallway in fact, and hopefully remind/poke them to think about the relationship of the gesture of combining air conditioning and fire, as well as crisis, privilege, corruption, information, culture, time, much less space, and its value, and any art historical stuff they might have archived in their own memory.

Do you feel “Summer of 1973: Tricia Nixon” takes on a different meaning being exhibited in Eastern Europe compared to the United States?

Well, people say context is everything . . . I hope the three pieces speak universally to a host of different things we can all appreciate. Naturally, that appreciation will fluctuate between cultures, politics, gender, age, geography, history—art or otherwise. They say Prague is the Paris of the East, but I’ve learned from a very reputable source that Paris is the Prague of the West. Let’s see how East reads West, or is it the other way around . . .