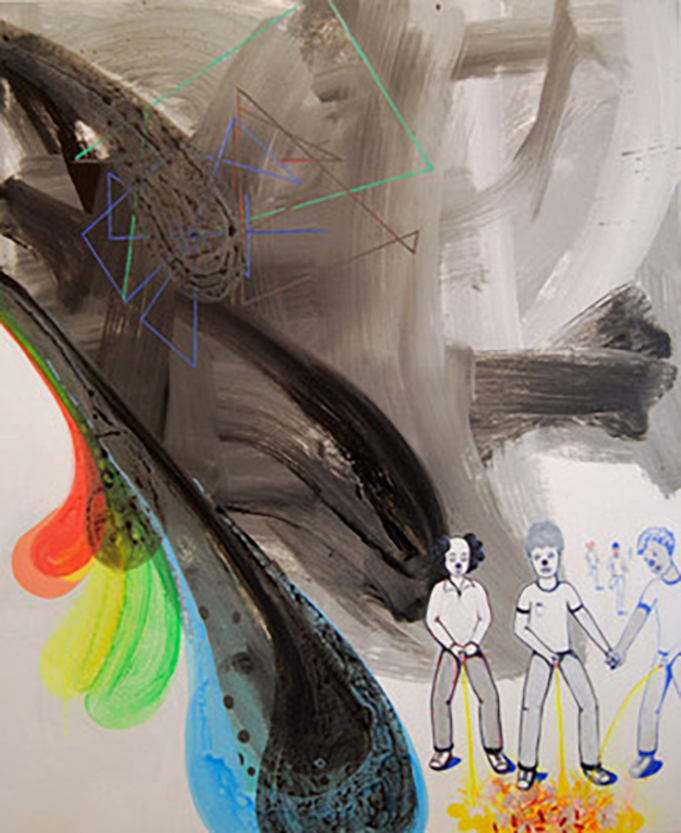 Artist David Humphrey is a New York-based painter and sculptor, known for his abstract combination of Pop and Surrealism. Fueling this abstraction, Humphrey focuses his paintings on a protagonist, including subjects like puppies, kittens, clowns, and snowmen. David Humphrey is not only an artist, but also a writer. Blind Handshake is Humphrey’s most recent publication. This anthology offers art historical text from a firsthand point of view, which is noteworthy, as art historians often write these historical texts.  Currently, Humphrey is preparing for his two upcoming November shows, one of which is in New York at Fredericks & Freiser (November 8-December 22) and the other in Washington D.C. at the American University Museum (opens November 3).

How would you describe your current style of painting?

What are some influences that have directed you to this point?

Are you thinking of drugs? My doors of perception were opened in high school by Van Gogh, Cezanne, the impressionists and a lot of art at my local museum (the Carnegie in Pittsburgh).

Are you aware when your painting style changes?

I’m a restless artist with an appetite for unexpected images in my studio so I’m frequently trying out a range of what might be called “styles” to throw myself off (style is a word I generally avoid because I’m not quite sure what it means, unless I’m using it as an insult.)

What encourages the change?

You create abstract sculptures using stuffed animals. Describe your process and the idea behind it.

I go to Kmart and buy two overstuffed animals of the same species and bring them back to my studio where I tie them up and cover them with a mixture of hydrocal and paperpulp. Then I keep working on them until they make me as happy as a sculpture by Henry Moore.

Would you say there are similarities between your paintings and sculptures?

Yes! They are equally fucked up. I try to fold some aspect of collaboration into both mediums, sometimes with found objects or images but also with split-off parts of myself: painting as a form of acting.

Your most recent book Blind Handshake is an anthology of your writing on art. What prompted you to publish this book?

The director of Periscope Publishing asked if I wanted to do a book. I’d been writing about art since the early nineties and had accumulated a pretty large archive. We thought it would be exciting to cut up and thematically reorganize that archive with images, in an inspired design by Geoff Kaplan, to make a case for writing as an extension of the studio. The book is mostly about other people’s work but I feel there’s an encrypted manifesto of what matters to me about artworks.

When did you first know you wanted to be an artist?

Somewhere in Junior High when I was trying to grow my hair long, wishing to be a hippie.

Even with a protagonist your paintings are very abstract. Do you have an idea of the meaning behind a painting or your overall vision of the finished product before you start?

I’ve barely a clue, that’s part of the thrill of making a new piece. Sometimes I have a pretty specific preparatory image but it usually changes along the way and when it doesn’t I still need to be surprised by the result.

You are currently preparing for two upcoming shows. Do you have a specific theme in mind for the works you are submitting?

In November I have a show of new paintings at Fredericks & Freiser in New York that will include an accident-prone spaceman, ambient spectators and an overturned cement truck. At the American University Museum in Washington, also in November, I’ll be showing selected work from the last ten years called Pets, a President and the Others.

Who or what inspires you?

My multi-talented and disarmingly funny wife Jennifer Coates, who weighs in on all my work and much else.