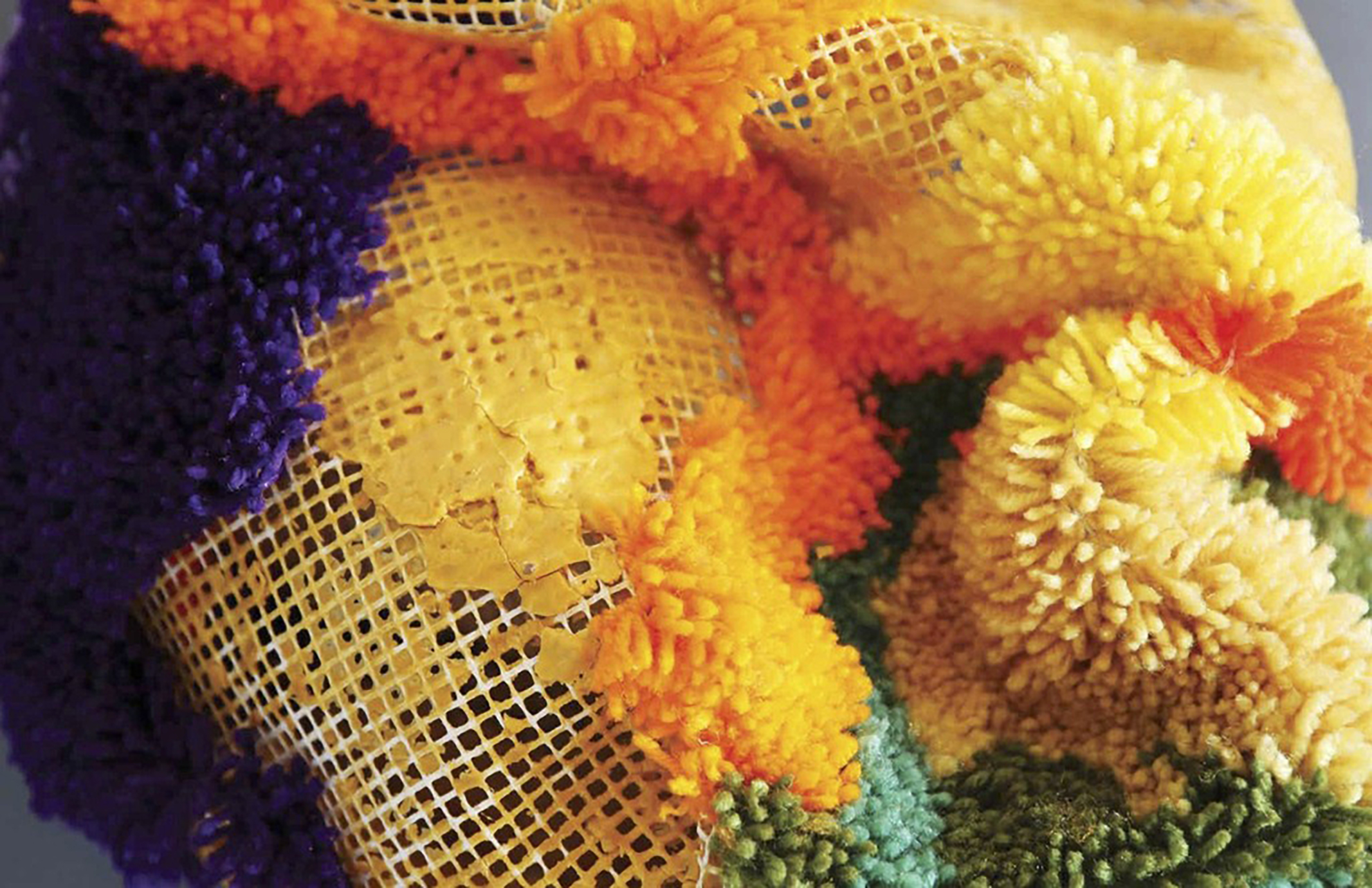 Working within a wide range of media including sculpture, installation, and performance, Connie Walsh uses her work to explore the transitional space between interior and exterior, intimacy and detachment, private and public, self and other. Currently working in Los Angeles, her work has been presented in numerous exhibitions throughout the country, including solo shows at Marianne Boesky Gallery and SculptureCenter in New York. In zing #24, Walsh presents the project “interior façade,” a series of photographic pairings of interior architectural details with amorphous sculptures made of rug-hooked canvas, beeswax, and yarn. Visually intricate and immersive, Walsh’s project provides an expansive inquiry into both the divisions and inextricable connections between places of interiority and exteriority.

Many of your works are sculptural, or created for installation. What was it like to create a sculptural work that would be presented in the two-dimensional format of a magazine? Is something lost, or added, when the work is photographed?

I am interested in the expansion and potential collapsing of illusionistic space when using different dimensions within a piece. The project consists of both the sculptures and large-scale digital prints. The photographs are a further investigation accessing the interiors of the three dimensional space of the sculptures. This space is then manipulated and flattened and finally juxtaposed with a detailed exploration of architecture, which offers structure for the biomorphic sculptural forms. The magazine format reinforced this pairing with a central seam. I became interested in this place of contact, both in how these differing spaces inform each other as well as with how they create visual tension with their proximity. The large format prints are the same ratio as the magazine with two images making up one print with a central transitional vertical line.

I really appreciate the freedom that comes out of Devon’s approach to magazine proposals being as projects—i.e., that she offers a span of pages in the magazine to do with it what you will. It allowed me to think of those pages as a three-dimensional space to work within. I was interested in the images being “read” horizontally and vertically with a centerfold. In the magazine, the thickness of the spine blurs the transitional space between the two images implicating the possibility of actual space.

Did you think about the readers of the magazine and the physical ways in which they would interact with the piece when you were creating your project?

Yes. The images are all full-bleeds and the layout varies within the pages of the project. I set up a spatial sequencing of an image of the sculptures with an image of the architectural details each on its own page and at times I interrupt that with one image taking up two pages entirely—these being images of the sculptures—a centerfold. This encourages the viewer to turn the magazine while looking at the project and maybe even disorienting the space of the subject and his/her relationship to the object of observation. I was interested in shifting the viewer’s positioning and his/her ability to distinguish between the space of the interior and its relation to the exterior being outlined.

You mentioned the relationship of interior/exterior in this piece, and in reference to other works you have written about investigating the relationships between self/other and individual/society. Did you learn anything about these relationships when working on interior façade? How has your understanding of or attitude towards these dichotomies developed throughout your career?

In past projects I’ve combined personal events or moments with environments that suggest and heighten the place of contact, or transaction, between private and public experience. In this project I was more interested in the ambiguity of these realms—as being oppositional and in exploring the transitional space between interior and exterior, intimacy and detachment. This suspended space is both permeable and of a shifting nature. The existence of a “skin-like” interruption of contiguity un-sites the viewer’s conventional perspective.

How do you see the opposing pages of “interior façade” interacting with one another?

As I was creating the piece, the idea of sculptural spheres—a metaphor for what was once inside and extracted—led to a tactile inquiry into a possible interior. I created these sculptures around balls of varying sizes, but eventually the spherical forms started to collapse due to the weight of the rug hooked yarn and leave more misshapen inaccessible spaces. I then had to go within the sculptures to take some of the photographs.

As for the architectural spaces, I am currently living in a Schindler apartment. Schindler’s proportions, fluidity of space, and continuity between inside and outside are framing my family and our domesticated movements. Images of the architectural details provide structure to the images of the biomorphic sculptural forms. Photographic pairings of the sculptures with chosen interior architectural details initiates the perceptual sense that exterior is defined by the interior and vice versa.

Do you have any current interests or projects that you’ve been working on that you can share?

Lately I’ve been interested in memory—how selective it is and seemingly private yet it functions within a larger context. I like the idea of selective memory. I have also been thinking about a further transformation of the sculptures in the project interior façade. I’m exploring the possibility of casting the sculptures out of silver or aluminum and having it be a one off burnt out process- losing the sculptures completely—the color and tactile material—into a more permanent weighted mass. In a sense giving the empty interior cavity a solid form.