CHRISTIAN SCHUMANN: THE SPECTACLE OF REPETITION 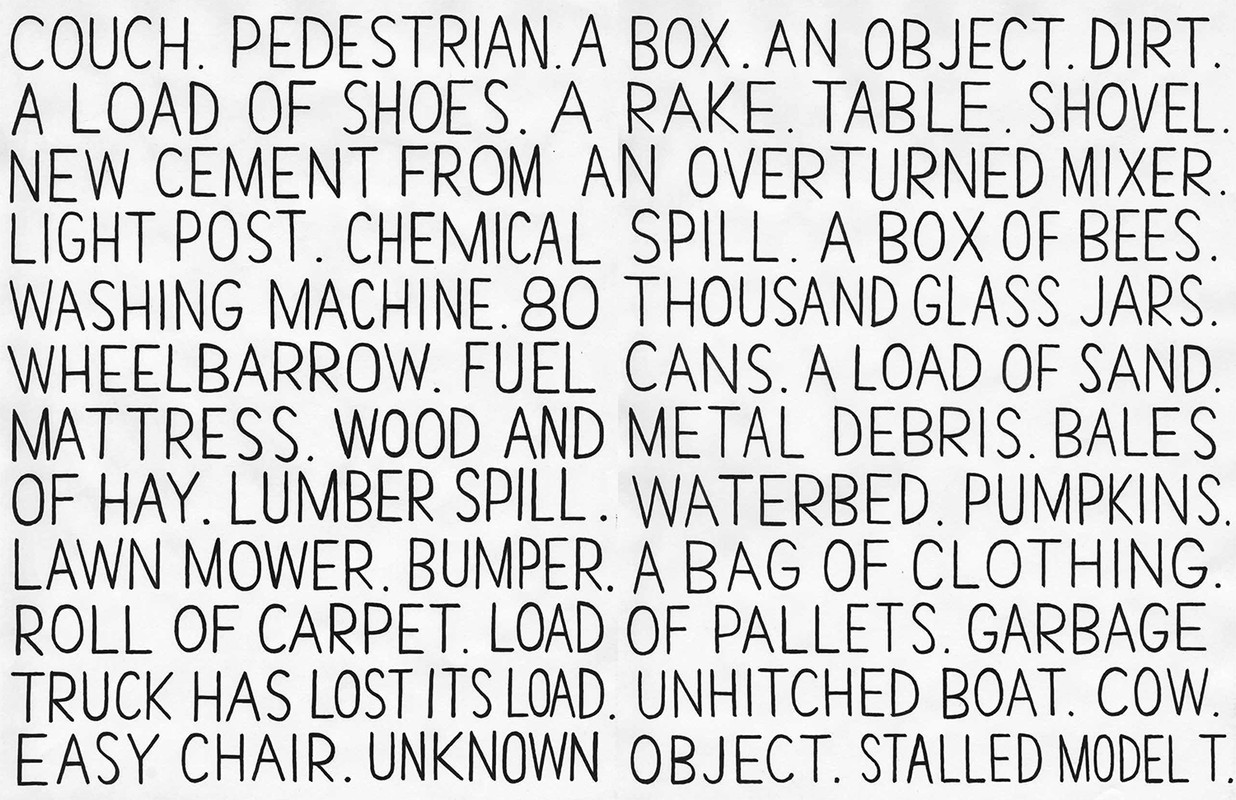 Known for his signature expressionist paintings and drawings featuring cartoon-like imagery, Christian Schumann blends landscapes, still-lives, and figures in his artwork. Born in Rhode Island and raised in Texas, Schumann graduated with a BFA from the San Francisco Art Institute in 1992. With influences ranging from the underground art scene to the animation and video art realms, Schumann creates works that are at once imaginative, subversive and pop-culture infused. Schumann often combines text, abstraction, and figuration to create work that evokes a sense of imagination, and drips with an underlying political and social commentary.

What inspired you to transcribe traffic reports, as in your work “Obstacles” featured in zing #25?

I happened upon radio traffic reports on Los Angeles radio stations incidentally as I went about scanning the radio looking for anything interesting to listen to. While most stations were fairly unlistenable, the one thing that universally stood out was the distinctive obsession and personality of the Los Angeles driving experience that stood out in the traffic reports. There was an excited joy in reporting every turned-over trailer full of mangos or stray dog running along a highway. The incidents stood out so much I decided to record them as a list as I heard them.

Do you view obstacles as a negative or positive experience?

Too many obstacles can be draining and I admit I find them to be a negative, although ideally one could take a Zen Panda approach to them, waiting to see if what at first seems to be a negative ends up having a positive effect somehow. The paths of our lives are directed by obstacles to varying degrees, depending upon one’s luck and tenacity.

Why did you want to focus on the text and language of the reports, with no visual representation?

I think reading text describes an image perfectly well in one’s mind. I thought of writing the text as a form of poetry, not exactly concrete poetry but something akin to that. I never considered using visuals and thought of the lines and pages of text as a visual in itself.

I view this project as a form of poetry as well, and sort of an endless one at that. The obstacles in the traffic reveal something about the people of LA in the sense that what they carry with them, matters most to them. Do you think these “obstacles” reveal LA’s personality?

Yes, as you suggest, what physically matters most to people is what they choose to carry with them from place to place as they move. Casualties of these moves constantly end up shattered along the pavement: family photos, clothes, and mementos scattered to the wind and possibly causing terrible accidents along the way and influencing the lives of others.

In Hollywood fashion, I think there is an element of entertainment to the reports. In a city that revels in police chases that are televised as a sort of sporting event, any unusual activity that takes place on the highways constitutes a major element of everyone’s daily lives is noticed and transformed into spectacle. With a general lack of weather to report on perhaps these unusual obstacles fill in as a replacement for “dangerous” weather systems that would ordinarily maintain the interest of listeners.

I noticed many repeat obstacles in your work: varying types of debris (metal, plastic, wooden, glass), animals (dogs, a horse bench, a goose, a box of bees), unknown objects, furniture, and food (avocados, chocolate, carrots, grapes, red peppers, lemons). Do you think these objects are an accurate representation of Los Angeles?

In a utilitarian sense, yes, the city is revealed by its highway detritus. It almost feels like an engineering problem, a side effect of daily use which must be constantly dealt with. Los Angeles is an overburdened hub of transit for international shipping and food transport which results in the occasionally overturned vegetable trailers. Additionally, I omitted many entries in order to avoid too much repetition of the most popular items: gardening equipment, ladders, mattresses and furniture. Lawn care workers are pretty ubiquitous and there is generally a lot of mobility in people’s lives so a combination of flux and upkeep pervades the transit routes. Patterns, habit, entropy at the edges.

Do you have a personal connection to Los Angeles?

I lived there for six years or so with my family and our daughter was born there. I don’t currently have a great personal bond with LA apart from friends that live there.

Do you think the early 2000s were a different time than now?

Not really. I think all the elements that comprise our current state of affairs were in play in the early 2000s as well. If anything I am disappointed in the lack of long term change in our global societies over the past 50 years, let alone the past decade. The patterns of our world are older than we think, its obstacles presented as a spectacle of repetition and entertainment while simultaneously hindering our progress.

That is interesting you find the repetition of society as hindering our progress. That is true because if we keep doing the same things, how will we ever evolve into something different, or better? Do you think that our US society is too comfortable with the familiar and afraid of change?

The structures built by previous generations to inhabit provide for maximum convenience and minimum effort (providing one has funds to support it). Stepping out of these pre-existing paths requires effort, learning and a willingness to discard old things. Those are all very challenging barriers to breaking the system of patterns we all function in. It’s as though a collective neurosis is directing the continuation of increasingly pyrrhic habits of our societies in order to hide us from the reality of what lies ahead.

Take the most common element of highway debris for example: lawn care equipment. These devices are used expressly for the relentless maintenance of a centuries-old European tradition meant to imitate bourgeoise status which exploded across 20th Century American real estate development. Here we are now in the 21st Century maintaining an outmoded status ideal, which apart from being completely detached from necessary to a home environment, also creates a huge economic and environmental burden. Fertilization chemical run off, the burning of fossil fuels to power lawn mowers and their transport, the slow-moving lawn care vehicles also clogging freeways with debris. I believe that the removal of the traditional grass front lawn would have positive repercussions. The benefits would be limited but we are faced with the fact that most aspects of our lives are similarly outdated and the structures built to maintain this toxic civilization are at a breaking point. Human civilization is trapped on the global 405 of its own making.

What sort of obstacles do you see in society’s way in 2020?

We are our own worst obstacle.