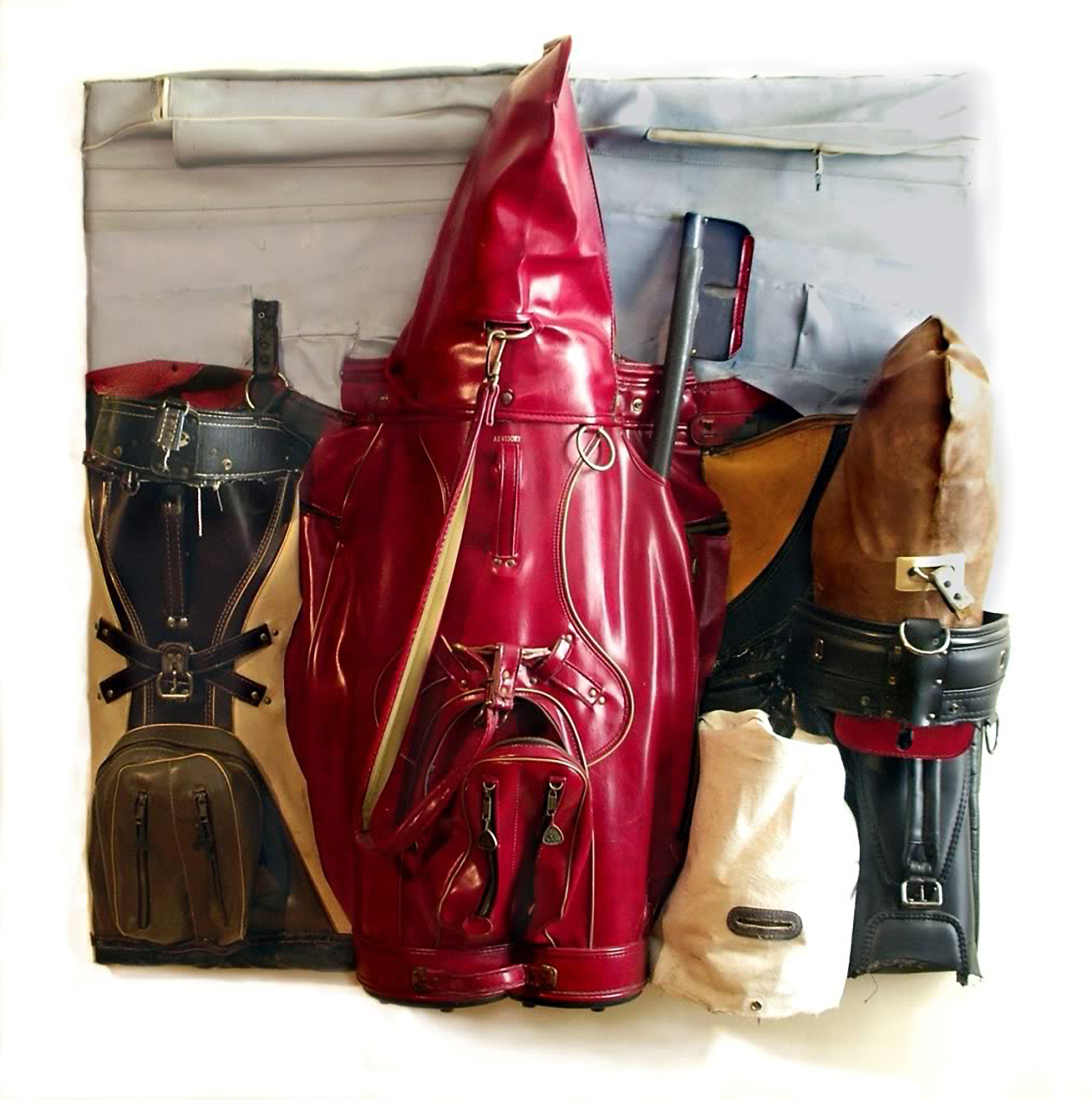 With a background in painting, Charles McGill has branched out across media: found objects, graphic design, performance, essays, photograpy, appropriation, digital arts, and more. His latest exhibition, “ Trapped,” at The Phatory, features golf objects re-processed through the social-political “Black” experience. On the walls are vintage golf bags that have been gutted, stretched, and arranged into figures on 4’ x 4’ squares. The subjects are creepy, provoking numerous associations, both perpetrator and victim, powerful and disempowered. Reminiscent of John Chamberlin and Philip Guston, these works must be seen in person for full effect. “Trapped” runs through May 26, 2012.

The majority of works in this exhibition are composed of an unconventional material—de/reconstructed golf bags. What first drew you to work with them?

Actually, I worked at a golf pro shop on 49th and Madison back in 1996 and one day, while straightening up golf bags on the floor I thought it would be cool if I could combine a vintage recording of Malcolm X with one of the very opulent and durable looking golf bags. The bigger, the better, and the more opulent, the better. I thought the contrast would be interesting. That was the very first thought of the possibility of using a golf bag as an object or subject in my art.

Sometime later, maybe a few months or more, I was working in the studio one day on a body of work that had come to its end. I was at the point where I couldn’t make another one of ‘those’ whatever it was at the time. I looked into the corner of my space and I saw an old golf bag that I hadn’t used in a while and probably wasn’t going to use any time soon and I said to myself, I’m going to collage lynching imagery onto that bag. It seemed consistent with the essential motivation for most of my work, which is, to seem to combine opposites so that some similarities can be arrived at eventually—if only via their propinquity. So this lynching imagery and the golf bag had some similarities but they weren’t directly related. I made the Lynch Bag and a collector bought so I thought to myself, I should probably make another one…

Golf is a game traditionally practiced at country clubs—romping grounds of wealthy, powerful white males—known to exclude other genders and races. As an African-American, artist, and golfer, what are your feelings on the sport?

I love golf. I love to play it and watch it on television. I’ve been to several PGA Tour events to watch the pros hit the ball and they truly play a different game than the one I play—that’s for sure! I’ve worked in golf from midtown pro shops to green grass country clubs. I was even thinking about getting my PGA pro status at one point so that I could be a teaching pro, but couldn’t devote the amount of time and focus that it required to get as good as I needed to be in order to pass the playing ability test. So after three and a half years of working hand-on and teaching juniors how to swing the club, I decided that what I really should be focusing on, and the real reason for exploring this career opportunity, was to further examine my relationship to the subject matter. It was a great experience working at a real country club, seeing how things really functioned and how the members really were as people as opposed to what I imagined or assumed rich country club members to be and how they might act. I think a lot of people think that rich members of country clubs are snooty with an aversion to anyone who isn’t white or rich or privileged. That wasn’t my experience at all. I met some of the nicest and most generous people I’ve ever encountered. And they were consistently pleasant. They were often grounded in faith and lived by it. I’m sure there are plenty of country clubs where racial or ethnic of intolerance is welcome, but it wasn’t my experience.

The other country club experience I have is at a place called The Bridge in Bridgehampton. The owner’s name is Robert Rubin and he is an avid collector of contemporary art. Needless to say, he came across my work one day and it was a match made in artist/patron heaven. Bob always likes to think and move to the beat of his own drum. So when he built this golf course and clubhouse he made the entire concept kind of funky. It cost $600k to join the club, but if you want to wear a t-shirt to golf, hey what’s the big deal? I’m an honorary member—I don’t have that kind of cabbage!

Bob has featured some of my work in the clubhouse and it has seen by some pretty influential people. I’m grateful for that. He actually installed my first life-sized sculpture of Arthur Negro, The Head of the Former Black Militant Golf and Country Club. It happens to be a self-portrait. It’s an impressive piece and he installed it out there, Black Power gloves, Uzi, black beret and all. What better place to have that piece on permanent display? Talk about combining opposites—it’s perfect! If you call the club, the outgoing message is a recording of James Brown singing “Should I take’em to the bridge? Take’em to the bridge?” from Sex Machine. It’s a perfect setting for some of my work.

Here’s a link to the NY Times piece on the club.

These works are very archetypal. They are figures, but assume no form in particular yet are loaded with references to power dynamics. KKK, S&M, Abu Gharib, secret societies, the gallows. All things referring to relationships of dominance and subservience. Did you intend for the works to be veiled and open-ended, or were you seeking specific associations?

I never have any specific associations or ideas. To be honest, I try to stay away from “good ideas” and work primarily on instinct and intuition. One day in the studio after spending time tearing these things apart and constructing abstract compositions on board, I cut one bag open as it lay on my work table. In doing so it began to have the eerie feeling of an autopsy—like I was beginning to perform an examination within the chest cavity of this thing. I pulled the bag open much like a coroner might do in cracking the chest cavity of a human corpse. I’ve never done anything like that before, so I’m only guessing on how it might feel. Anyway, that’s how it felt and I kept working and attaching this bag to the board, gluing and stapling and cutting and sawing these bags apart. It’s a very intense and frustrating process because the bags are not made to come apart. They are very well-made and are meant to stay that way. So I can get pretty angry making these things which might account for the emotional content of the pieces more than any direct association with another entity.

During this one particular piece, I took the hood that comes with bags like these and snapped it on to the top where it belongs (it’s a rain hood essentially), and there it was—a sinister figure, hidden and disguised beneath this dark hood. I kept working and made one of the best pieces of art I’ve ever made. That piece is called Four Men in Formal Attire, was sold and is in a collection of Bill and Pamela Royall in Richmond, VA. In the cradle of the confederacy! How cool is that!?

At the gallery we discussed the timely political relevance of this exhibition as racism gains social acceptance under the guise of politics, especially during the Obama presidency. Could you explain in more detail how the current political environment relates to this body of work?

Well I never look at anything in current events to inspire me or what I do in the studio. Actually, I made one piece some years ago that was a specific reaction to Amadou Diallo being shot by the NYPD, but other than that, I rarely do.

Having said that, I do think the wave of apparent and acceptable racism that seems to be affecting and influencing the tone of political dialogue is rather disturbing. I do think that the work is beginning to reflect this resurgent supremacy-minded activity. There seems to be a total disregard for respecting the office of the presidency simply because the office was occupied by a black man.

Early in Obama’s presidency there was an active campaign if you will, to discourage young kids to all of a sudden NOT aspire to be president when they grow up.

This whole feeling that Obama was something other, was “not one of us,” didn’t love “our” country, that this angered segment of society was going to “take our country back!” From whom? The black guy?

The Tea Party, O’Reilly, Hannity, Beck, Rush, Bachman, etc . . . they all stirred a pretty nasty pot of racial protagonist soup that comes dangerously close to inciting people to act a certain way. It’s like they are giving stamps of approval for behavior that is reckless, separatist, and backward. It paves the way for the president to be told “You Lie!” during his State of the Union and in the aftermath, talking heads rally their base of troops to support this very un-American behavior.

Anyway, I guess what I’m trying to say is that the golf bag is a very inherently political object. I use it to make art and in doing so, it very easily lends itself to interpretation on many levels and it is just pure serendipity that it has relevance within the current political landscape.