THE BACK ALLEYS OF DENVER'S CONTEMPORARY ARTSCAPE 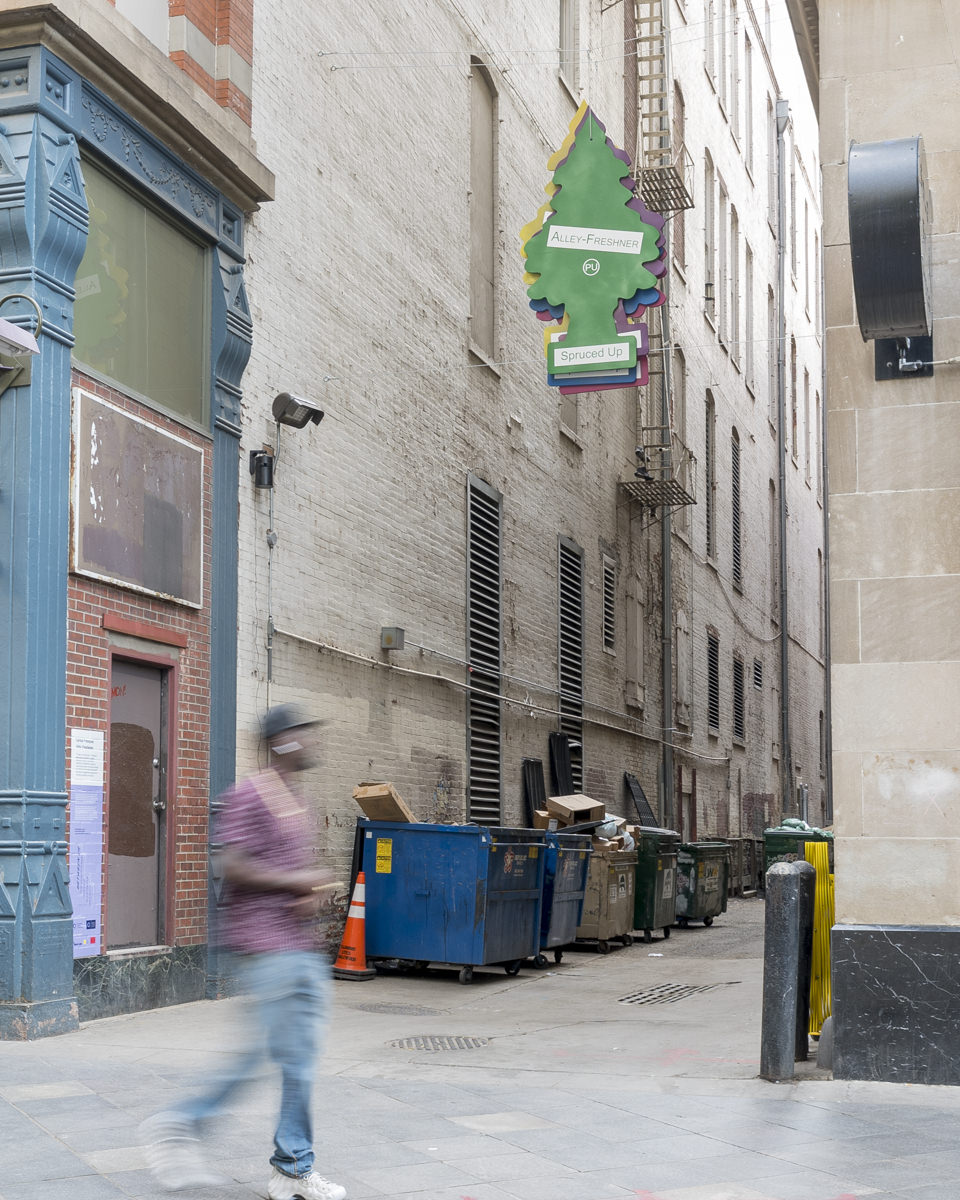 Black Cube Nomadic Museum is a non-profit experimental art museum based in Denver, Colorado, that supports artists’ projects occurring outside traditional exhibition spaces. Their current exhibition, Between Us: The Downtown Denver Alleyway Project, partners with Downtown Denver Partnership and Downtown Denver Business Improvement District to transform alleyways in the downtown Denver area with installations by five artists curated by Black Cube: Carlos Fresquez’s Alley Freshener, Kelley Monico’s Alley Cats, Stuart Semple’s I should be crying but I just can’t let it show, Joel Swanson’s Y/OURS, and Frankie Toan’s Public Body. Each installation was created for its specific site and delivers its own meaning and context. Earlier this month Black Cube’s Executive Director and Chief Curator Cortney Lane Stell took me on a walking tour on a sunny Denver day . . .

This group of installations are situated within alleys in downtown Denver. How was the idea to position artwork in alleys conceived? Were there any historical precedents for this type of site that you’re aware of?

The idea started by an opportunity that a friend, Castle Searcy, was working on. She had proposed a mural project to the Downtown Denver Partnership, the nonprofit organization that activates Denver’s 16th Street Mall. Her proposal was to commission muralists to create “3d murals” of Colorado’s attractions and pitched them as selfie opportunities. At the same time, Castle and I were involved in another project. She raised the opportunity to have Black Cube curate the project. I felt that with the funding and interesting sites, we could do something more engaging and dynamic than murals . . . (Denver has been in a major mural Renaissance lately). That’s basically how we got started, practically speaking.

In regards to your question about historical president, I am not aware of a specific history in fine art . . . but I do know the spaces have a long history with graffiti and mural art. Denver and other cities have seen a lot of growth in this area since the ‘80s, as it has become a tool for developers and real estate owners to add a youthful funk, at a relatively affordable price tag.

How was this group of artists chosen? Did individuals submit proposals or were artists invited to create site specific works?

The intent was to mostly focus on a local artists approach. As the curator, we selected the artists and, after a studio visit, invited them to come up with a few ideas we could explore together.

The 16th Street Mall is known as a major tourist thoroughfare in Denver. During our walkthrough we encountered a family from Tennessee admiring Kelly Monico’s Alley Cats installation. How did the expected audience factor into what artists and works were chosen?

I approached the project looking for works that would be accessible to a wide audience, from those within the field of contemporary art and to passersby. Many of the works are intended to draw people in. I did this by selecting artworks that could be recognizable at first glance and also elicit a candid response such as amusement or surprise. My hope is that this method encourages viewers to think more deeply about the works in relation to public space. However, I am not sure if that is happening outside of the art community.

The public reaction to Kelly Monico’s Alley Cats installation has been very interesting to experience. Cat-lovers are literally coming out of surrounding offices and businesses to comment or ask questions. Families also love to hunt for all of the 300+ cat tchotchkes—it’s almost become a game. This installation has really shown me how wonderful it is to make public space a place for curiosity. Though, I have to say, I’m not sure that people are thinking about the work more deeply. I have yet to hear anyone question the line the artist is walking by calling attention to our desire to anthropomorphize cats by turning them into doe-eyed garden sculptures or the reference to an infestation. Another work that has garnered a lot of attention is Carlos Fresquez’s large-scale tree freshener sculpture that dangles above a line of dumpsters in a particularly pungent alley. The work regularly makes passersby laugh, but it also speaks to a deeper level as to how we care for the city and the ways we perceive alleys as dark, often overlooked, public spaces. I also love the art historical connection to other provocative public works such as Paul McCarthy’s inflatable sculpture, Tree, which references an anal plug. 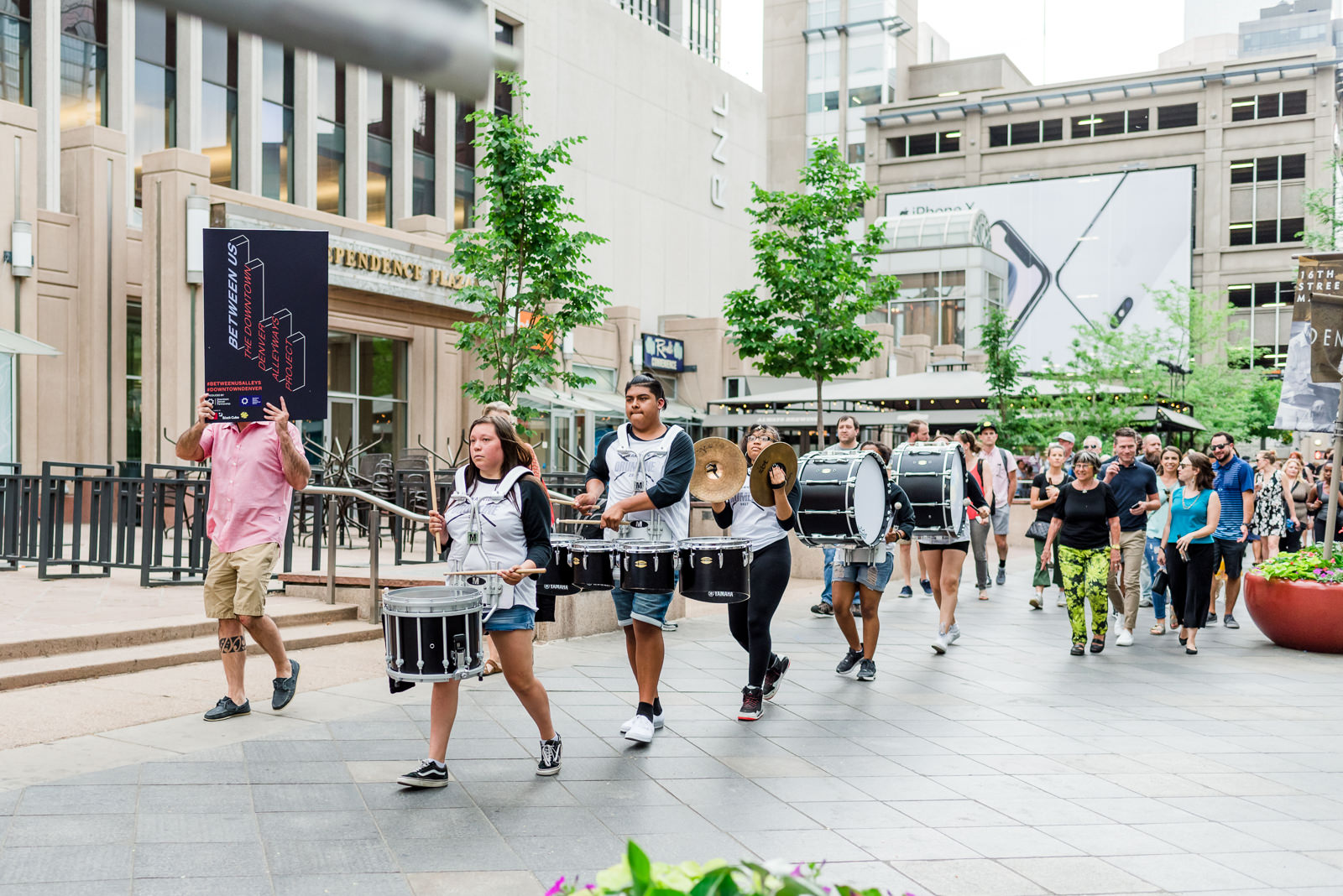 Exhibition tour led by the Montbello Drumline. Photo: From the Hip Photography. Image courtesy of the Downtown Denver Partnership and Black Cube.

Interesting to hear that you feel the general populace may not be engaging with the work on a deeper level. What leads you to draw this conclusion? Contemporary art often relies on explanation to reveal its meaning, and there are placards on site to assist viewers with accessing the artists’ thought processes . . .

I have to say, though, that I don’t expect everyone to have a deep contemplative experience. It’s perfectly fine for people to not even see these interventions as artworks. For me the priority is to disrupt space, challenge the mural statuesque, and offer artists unique opportunities that are both supportive and challenging. With that said, the most common response I have seen with these works is watching people stop to snap a photo, then move on. From that I’ve inferred that most people are simply amused by the image, but that is a huge assumption. Some folks do pause to read the text panels, but it’s far more rare (maybe 1 in 30 people). I guess all of this is the beauty and challenge of showing “art in the wild” so to say. I should also mention that expecting some would desire more interaction (mostly the artists and locals who follow Black Cube), we programmed tours and artist talks. The first tour was super fun—it was led by the Montbello drumline—it felt more like a parade . . . we had such high attendance that we had to use a bullhorn to talk at each alley!

Given the challenge of competing with the constant information flow and demand for attention from smart phones, I’d say that someone even stopping to take a photo means something. You never know how that image sinks in or resurfaces in their mind. But the drumline-led tour seems like a great idea and successful in deepening the engagement level. Any other programming for this project and/or other upcoming Black Cube projects that people can look out for?

There are no further programs scheduled for this particular project at the moment, but the works will be on view through (at least) May of 2019. However, we have several other projects in the works. The next project to open will be in Mexico, during the first quarter of 2019 with Alejandro Almanza Pereda. He has been amazing to work with— a lot of his work tests the limits of materials (both physical and/or perceptional). We are currently exploring a few of his ideas, so it’s a little early for me to speak on the details of the project. The best way to keep up on all things Black Cube related is by signing up for our mailing list on our website blackcube.art.