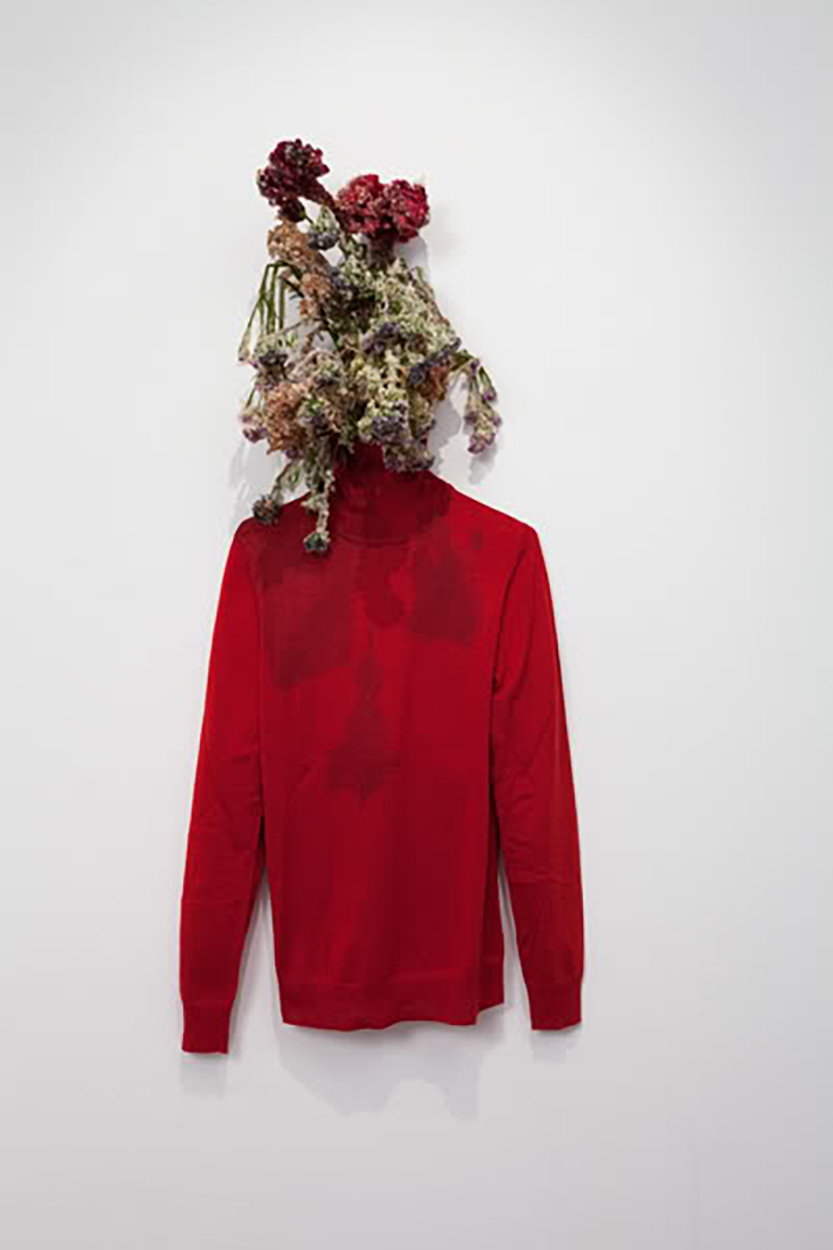 We were introduced to Anicka Yi’s work at 47 Canal, an LES Gallery operated by Margaret Lee and Oliver Newton, who played host to Anicka’s first solo show, Sous-Vide, last September. We met the artist for a studio visit in the space earlier this year. Anicka’s materials are unexpected and her process is unpredictable. Works like “Sister” demand a complete sentient analysis from the viewer, placing them in unfamiliar territory beyond the purely visual and inspire a multiplicity of ideas and emotions.

In your artist statement, you say you are drawn to perishable materials because of their affect, their aesthetic qualities, and their resistance to archive, permanence, and monumentality. How have you counteracted the challenge this presents to the creation and exhibition of your work?

I don’t know that I’ve counteracted the challenge of making and exhibiting perishable materials. The syntax of the work continues to develop and hopefully becomes more fulfilled. I’m developing sensory assets in order to explore the way language, media, and economy mediate technologies of the self and ways in which art making can be pushed towards an expanded notion of the sensorial. I’m interested in connections between materials and materialism, states of perishability and their relationship to meaning and value, consumerist digestion and cultural metabolism.

What first drew you to combining these materials with aggressive techniques such as deep-frying and sous-vide?  Do you have any culinary training?

I don’t have any culinary training but possess an affinity for radical technique. Deep-frying is such a base form of achieving flavor incorporating so many fascinating formal attributes—texture, sense of touch, smell, sound, sensations of temperature and pain, fragility. I love the violence of the process. It’s high drama. So is the process of vacuum sealing food to slowly parboil it for 72 hours. These are all techniques of desire that [circumscribe] Taste. Taste is about thresholds. We’re all implicated in the politics of taste which are problematic. I’m interested in liminal, dangling spaces between a fully realized “biological” experience of taste and what is often at odds with this as conceptualizing taste. How the transglobal contemporary consumer apparatus appraises taste. I think some of the most radical art that has been developing in the last 10 years has been in the culinary arena, El Bulli, Noma, Subway sandwich franchises by example, but especially the dominance of the flavor industry on our reality. I’m drawn to the totalizing experience of the art of “taste”: the performative, the formal, the theatrical, the sensorial, the metabolic, the irreducible unique moment. This arena calls into play the concept of taste and value through biological/chemical sciences, economics, emotional and sensory triggers (receptors).

The deep fried flowers bouquet installations are an aggressive treatment of tactility—surface textures, simultaneously inviting and repelling touch. Each flower stem was individually coated with tempera batter and panko crumbs then deep fried in a deep fryer. I wanted to impose violent techniques on delicate, fragile materials to expose vulnerability, stages of metamorphosis, delineate different strains of matter and perishability. To exaggerate the weight of the batter and crust onto the light, ethereal quality of a flower. Flowers are enjoyed for their “natural” beauty and purity. They needed to be “messed” with to bring out other qualities, to address questions of purity, beauty, perishability, decay.

One of your works, Convex Double Dialer of a Shining Path, heats together “recalled powdered milk, abolished math, antidepressants, palm tree essence, shaved sea lice, ground Teva rubber dust, Korean thermal clay, and a steeped Swatch watch” on an electric burner. What leads you to such specific combinations of materials?

I’m drawn to speed and vectors from different economies and timelines. The elements in Convox Double Dialer collide, co-mingle well together as language as syntax. I like the sensorial/cognitive scramble. It’s earthy and cosmic. My work is language building. It’s word building, by what certain elements, say, the recalled milk, abolished math, antidepressants, palm tree essence, etc. mean. Whereby Signifier, exchange and use value are all entangled. They’re like poems. For instance, in one of my sculptures there is MSG (a flavor enhancer) a big metal bowl. [You Should Hire Me Because My Kiss Is On Your List] I get asked Why MSG? MSG could always just be the right grain of powder but it could also be something else. It’s neither nor. It depends on the syntax. There’s no right answer for why MSG? It’s equivalent to asking why De Kooning used red in Woman Painting. It could be that MSG was used because it happened to be in a shop downstairs from the studio where the sculpture was composed. It could also be that MSG is very commonly used in Asian foods. The materiality is about the triangulations between the thing itself as aesthetic qualities—the language and the social/visual implications of the things. I applied Shining Path to the title because I was thinking of timescapes, like when Wipe out the past and let the future take care of itself.

How much experimentation usually occurs before you think you’ve achieved a work in its final state?

A lot. They rarely ever feel final.

Following up that question, what have previous failed experiences taught you to avoid?

Avoid a trip to the Emergency Room.

What have been your favorite ingredients (if I may call them that) and processes? What’s something you would like an opportunity to experiment with?

You force the observer to confront barriers such as scent and edible medium. Should they consider this taboo? If not, how should someone approach viewing your work?

Nothing is really taboo. One could approach my work with a presentness of biological and intellectual receptors. Be prepared to crank up the memory machine.

You explained to us previously that you’ve attempted to visually represent the metaphor of art as a metabolism in previous shows. Do you plan to translate this idea into any other mediums?

Mostly through writing and performance.

Your exhibitions and works have memorable titles such as “Excuse Me, Your Necklace is Leaking” and “Yes, It’s Made for That.” What goes into these names?

Finally, we discovered you’re really into post-apocalyptic sci-fi novels during our studio visit at 47 Canal.  Can you see your curiosity in a concept like the “Apocalyptic Sublime” ever intersecting with your process as an artist?