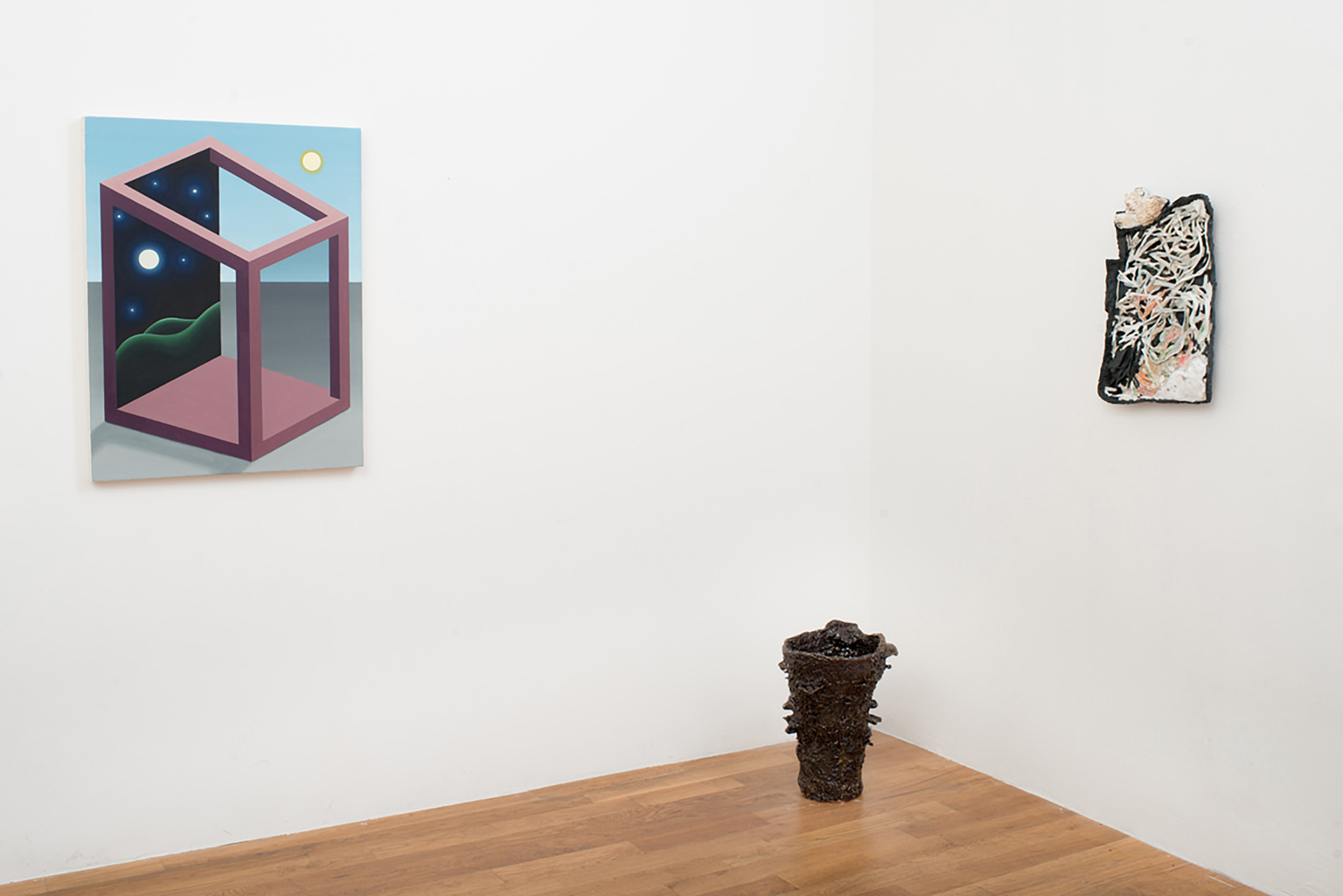 A Harmless Exercise in Boundlessness . . . (or So Far I Haven’t Killed Myself or Killed Any Other Person) an exhibition at Gildar Gallery in Denver featuring the work of Andrew Cannon, Jasmine Little, and Emily Ludwig Shaffer uses the foil of mushroom foraging as its frame. An increasingly popular American pastime that would normally find little to do with contemporary visual art betrays its avant-garde history in the activities of John Cage, mushroom lover and reincarnator of the New York Mycological Society. At this crossroads of mycology and music theory, the idea of “chance” relates a multiplicity of meanings and purposes, from the I Ching to stumbling upon a flush of maitake in the woods. In a similar way, the work in this show revolves around this intellectual framework, with the work itself taking many forms including painting, sculpture, and multi-media assemblage.

The exhibition’s title is sourced from quotes by and about John Cage. Mushroom hunting involves identifying the conditions needed for one to be at the right place at the right time in order to find a bounty. How do you feel that your work does or does not engage with chance? And as an artist, do you ever feel that it’s necessary to set the table for ideas or a vision of new work to arrive?

AC: I don’t think about chance really—or at least not in the emphasized sense that Cage did. In terms of setting the table, I try to just work and walk as much as possible. Stay in the right place long enough—the broken clock is right twice a day or whatever. It’s less elegant than only showing up when it’s productive, but it always works eventually. I go through a few miles of forest when I walk to my studio and see fungi or don’t, and I work in my studio and make progress or don’t.

JL: Yes, I think my work involves chance, but maybe more in the sense Andrew described. It is always a surprise when something comes about in the studio—that makes painting very fun and exciting for me. And I spend lots of time trying to make all the conditions right in the studio for something to occur, but I consider this sort of cleaning, organizing, standing around, etc. as studio time even when the end result is not known. I don’t really plan my paintings, or actually, I make lots of plans for paintings and don’t really follow them. Something typically occurs in the process that seems important or more interesting than the intention I set out with, so I allow that to become primary. I have to put forth a lot of effort and intentionality in mushroom hunting too—the best conditions to find what I am typically looking for are kind of distant from my studio, but this also does not manifest in the intended manner. It’s just the starting point and creates the space required for the event to play out however it happens to.

ELS: I generally agree with the old saying that chance favors a prepared mind, but like Jasmine and Andrew, I don’t actively think about chance that much when I’m making work right now. I did a lot in the past, though, and a big part of art-making for me has been developing tools and parameters in my studio that allow space for the ideas that interest me to emerge in an organic way.

The consumption of wild mushrooms involves risk—of gastric distress at a minimum, and death at the most drastic. What types of risk arise for you as an artist?

ELS: I have a lot of messy feelings and thoughts about the term “risk.” In short, though, I think some artists make powerful artwork that overtly engages risk, but it’s usually by exposing threats that they or others already live with on a daily basis. Actively creating risk is an idea I more often associate with male hubris. So far, my relationship to making art is very different from artists whose work has literally killed themselves or others—even if by accident. I think anyone who puts their own time, body, emotions, effort, and resources into any endeavor is risking something, but it’s a term I feel uncomfortable or uninterested in claiming as a key ingredient in my process.

JL: I agree with Em regarding the messiness of the term “risk.” When I was younger I really liked to gamble. Lately though, I feel like I have spent a lot of time and energy to create a safe environment in which I can make work.

AC: I’ve only poisoned myself once—I had a bad reaction to some imported aspen boletes I bought frozen from a Russian grocery store. I do eat a lot of mushrooms but only occasionally is there any lingering doubt I’ve misidentified what I’ve collected though, and if there is, it adds the smallest bit of friction to an otherwise quiet hobby. Emily is right and I agree my work does not engage in any serious or mortal risks, but I think hopefully there’s always a feeling you might embarrass yourself or the real fear you’ve financially overextended yourself.

In this show, each of your work engages with natural forms or the idea of nature—including mushrooms themselves—abstractly, representationally, and/or literally. What does the environment mean to your practice?

JL: I have always had a strong relationship with the environment, I grew up camping, rock hunting, spending time outside. My parents were both really good at identifying plants, minerals, rocks, and spent time describing the landscape and knew a lot of narrative history associated with different places. I really wasn’t terribly interested as a child in rock hunting in Death Valley in the summer, but I appreciate that I had that type of upbringing now. Where I currently live is a really rural community in Southern Colorado and I spent a lot of time hiking and being alone in nature. I am interested in this type of activity as an experiential thing. My paintings in this show are influenced by the season and depict the plants that were out right then such as berries and mushrooms. And they also depict things you find on the forest floor like skulls and branches. The work was influenced by Dutch still-lifes, illuminated manuscripts, pattern, decoration, etc.

I was also really obsessed with smoking when I made these paintings, and my teeth, I was having all these dental problems. Anyways, I was quitting smoking so there is like this literal deterioration of my body going on, how that feels, etc. I think this sort of obsession with my physical body and death is really present in the work. And the way I paint and sculpt is always very physical, bodily. One of my favorite ceramics in the show sunk into its current mushroom-like shape naturally from being built to quickly so there is also this very literal, natural aspect that is material in my work.

ELS: When I invoke natural forms, I’m pulling from a lot of traditions like landscape and still-life paintings, but also working within common metaphors: leaves can be fingers, legs, vulvae, phalluses; potted plants are domestication, cultivation, artifice.  Most of what I’m painting now is from my imagination, so when I paint plants they’re usually stiff or plasticy and end up more like an idea or the fantasy of a plant rather than something that is observed and actually living. The garden and the greenhouse are also potent spaces for me. These feel daunting because of the amount of control and care they require, but I also see them as tender, as an exercise in nurturing or cultivating a craft and aesthetics. I think gardening/plant keeping traditions express a lot about a person or a culture, and I sometimes think about them as symbolic of desires for some prelapsarian utopia.

AC: I’d just say “yes” since my thinking about nature isn’t particularly organized and the question is too sprawling. I think a lot about nature and the image of nature, how flora get woven and encoded into culture. But I also think about painting, and fireplaces, and airplanes. I’ll look at mushrooms in Central Park and then walk into The Met and look at lacquer boxes and I try to think about it as one continuous system. One afternoon feeling.

Mushroom hunting calls to mind pastoral utopia. Does your work engage in the utopian?

AC: It doesn’t, or at least I don’t throw that word around much. I do like the utopian novel. News from Nowhere, Herland, etc. I had a professor that would say every artwork is, for better or worse, a vision of the artist’s perfect world. That makes sense to me. I try to keep each work self-contained, its own trial world.

ELS: My mom was an architect so I grew up running around architecture firms, flipping through all the modernist starchitect coffee table books, and seeing architecture periodicals every month. I was obsessed with the different ways the architects and designers would add people, plants, and dappled light to their drawings and models for buildings yet-to-be-made. I thought they were both beautiful and creepy. These scenes were supposed to be utopian and inspire the imagination, but they were mostly stiff, unnatural, and read like a faulty promise. I don’t always think about the spaces in my paintings along these terms, but I’ve definitely explored it in some—especially from a little over a year ago when my old studio had a huge Renzo Piano building being erected outside of it.

JL: I don’t think my work is overtly concerned with utopian ideas. There is conflict, tension, and the materiality of the paint is pretty present. I have always been sort of an immediate painter and have a hard time with illusion. I think there is something utopic philosophically in my work. I am contented with a lot of different types of “successes” in individual works, like how Andrew reference earlier embarrassing yourself in the work—that is defiantly something I enjoy. I am not afraid to make something bad. Basically, I think being able to paint full-time is a crazy luxury, sort of an utopic dreamlife and political act in itself.