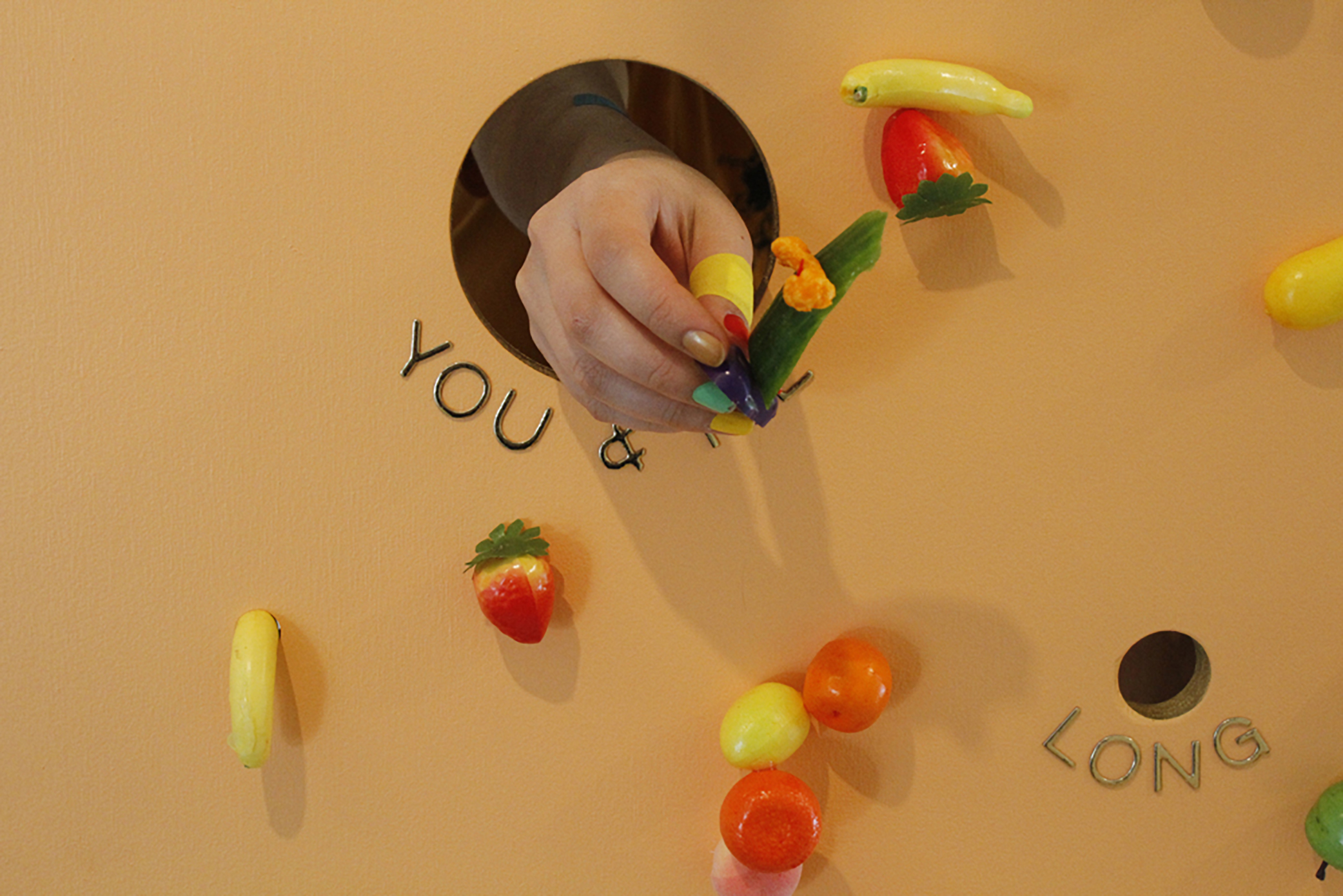 Alison Kuo is a Texas native. She received her BA from Southwestern University in Georgetown, Texas. Her blog Accidental Chinese Hipsters has been featured in Vice Magazine. Currently, she is in her first year of the MFA program at the School of Visual Arts in New York City. We talked in early January, following her solo show Colorful Food at Eleven Seventeen in Austin, Texas.

I am back in New York, just a few days after Colorful Food. I am thinking back to the night; there’s a room with four walls bearing your large format photographs. Some are of food, some are of food abstracted beyond recognition, and some are arbitrary shots, in which the shapes, colors, dimensions echo those of other photographs. These photographs are the only For Sale items, according to the price list at the door. Your food-cart inspired offerings and performance are free. (If we can get free food, why would we pay for photos of it? Oh yes, because this is the art world.)

I’m writing you from my studio back home where I’m surrounded by half-reconfigured snack machines, bags of gummy candies, chips and chili peppers, illustrated cook books, and an overflowing unpacked suitcase filled with plastic fruit serving dishes and shiny vinyl letters. There’s a lot to think about after these two public showings of my new work, and in the runaway train that is a two year MFA program I’ve got to try to fix my eyes on the moving landscape to see where I’ve been, guess at where I am now, and also look to the future without getting too dizzy. Having you as a fellow traveler, one that I often encounter here (New York) or there (Texas), helps me to orient myself, and for that I am grateful. That you’ve responded to my deepest, perhaps concealed, intentions for this rather silly performance is wonderful.

The scene: We are in Austin, at Eleven Seventeen, the home/gallery of our friend Joshua Saunders (the space is his goodbye love letter to Austin before he imminently departs). I saw an earlier version of Colorful Food at your studio in New York a few weeks before. This is certainly leveled up; the colors of the specially painted floor and the incisively hung and glued plastic fruit replicas define the space as a space more successfully. The now wooden (formerly foam core) center-piece demonstrates a solid craftsmanship. The choice to rest it on the unobtrusive and equally well-built rusty, rectilinear base made by Ben Brandt makes formal sense as well as radiating a warm send-up to our Austin-Brooklyn back and forth network. The center structure itself is no longer white, but peach. The labels glitter precisely in gold, begging to be spoken, or sung. The holes they name may well be microphones. Front and center, “You & Me” dominates. Appropriate. Then the performance, or the activation, as I prefer.

Performative artwork is activated when it is shown to an audience, as in the thing/idea becomes alive. I think with good art—a painting, a performance or anything—that stimulation, that electric activity, happens in the mind of the audience. In this project I’m harvesting as many of those new associations as I can by having a conversation integrated into the process. At the same time, this isn’t a laboratory or a focus group. Establishing myself as considerate of every aesthetic experience my audience has plays a big role in the trust I’m trying to create, the feeling that makes it okay to let go of control a little bit and eat the squid cracker with mayo, honey, wasabi peas and pop rocks.

I realized something during too many delayed flights back North. Visually, the space of Colorful Food was fine and striking. And the photographs would do well even alone. Yet, watching others partake, calling their menu selections to you through the according hole, the potential spectacularity was mostly lost on me. The space disappeared, and we were at just another East Side party, not a terrible thing. But when I was the transmitter to your receiver and vice versa, I felt deeply the distortion this work produces. Felt it do what art does. I didn’t feel that power as Colorful Food’s demonstration of a relational aesthetic, no doubt how many are discussing it in these following weeks. I felt its action in the disruption of information.

You are right: the installation and other art-looking things, the party, the fun, is almost an act of misdirection. My interest is in how our personal word choices and mental associations shape our daily transactions (commercial and personal), and in turn how much you or I are really engaging with the people we transact with. I often find myself almost unconsciously thinking: Can I get what I want? Is there something that I don’t know that I want that this person could give me? How do I ask? How can I reciprocate? Is there something I can give back that they want that I don’t know they want? Or that they don’t know they want yet but I can provide? What I’m finding is that the smallest act of willfully sidestepping the familiar way things go in an interaction is liberating. The brain says, hey, you’ve gone off the script, and both sides become present in constructing new language for what’s happening. That opens up possibilities for un-preconceived things to manifest.

Like at a food cart, I could place an order. But unlike a food cart, the feedback you built into the work through a seemingly arbitrary menu of signifiers and the “small talk” you require to round out a customized snack was, as feedback is, utterly distorted. Thus, I discovered the excellence of tangy cotton candy wrapped in purple cabbage. Colorful Food then, surprisingly, was about information, how it traverses through our everyday exchanges—morning coffee orders, buying over-the-counter meds, all (commercial) exchanges—and what distorting it might reveal and produce.

One thing that threw me off about the Austin show: it was loud in there! I didn’t expect that the new snack machine box I built from plywood would be so much more sound insulating than foam core (duh), and also (duh) forgot how bouncy noise gets at openings when lots of people are standing around in one room all talking at the same time. So I had to yell a lot and steal looks at people’s faces through the holes, which made for a different, more visceral feeling for the performance. I’m going to think about your use of the word “distortion” as I go forward. Distortion of language read or heard, of sound itself, of taste, of desire, of appearance, of expectation. Dialing up one type of distortion, isolating and accentuating it, could produce more extreme results. I fear not knowing at what level of dissonance I would lose the trust of my audience, but that’s where I need to challenge myself. Certainly at the Eleven Seventeen closing party in February there will be opportunities to test this out, as I’ll be skyping into my performance.

Again, part of what Colorful Food produced was a great party and novel moments of relating, sure. But what I took away was not about the larger networks of sociality, or feeling like I had participated in a “new” way of producing space. What I took away was the power of the small gesture to focus our attention on the massive flow of (mis)information charging throughout our waking and sleeping lives. What I took away was the ways in which art can recharge how we undertake the daily projects of “You & Me”.

In parting, I hope you eat a kumquat soon. It’s a small citrus fruit that looks like a miniature orange, and you can find them in Asian markets this time of year. First shock – you eat the peel. Then it defies you again by being sweet on the outside and pucker-inducingly sour on the inside. Eat one, and then give one to your friend.